BACK AT THAT VERY BIG HOUSE IN THE COUNTRY!! 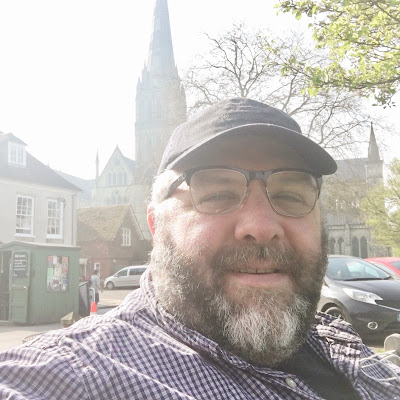 This week I'm going to be telling you all about my week away in Kent - what I recorded - who I chatted to, not to mention which podcast episodes I released; I'll also being sharing with you some photos from my trip...

To begin with, let me tell you which podcast episodes I have been releasing since I returned - one or two of them that I recorded whilst I was down in Kent...

The first tells all about what I got up to on Friday The 13th!!!

Here we are for episode 162 - in which Mr Yeti shares with the listeners exactly what he got up to on Friday The Thirteenth right at the end of his recent holiday. Paul hunts for evil things in the garden - ponders weird names on the map and talks with ladybirds. We also hear chats with Toppie Smellie about current TV favourites, reflections on an imaginary trip to Atlantis - not to mention a revealing look at what podcasters are really like behind-the-scenes. There are also poems and comments from the regulars - Ikk also receives a question from The Faraway Nearby's new co-host, Princess Mykah and we have Sutton Park clips from nearly 18 years ago with special-guest. George W. Our next episode, number 163 is our live show for April 2018. Do join us, won't you?! Please email me at shyyeti@yahoo.co.uk if you have any comments - you can even send me a sound-file and I'll include it on the show. The music is by Shy Yeti and Luca. Sound effects by Paul Chandler. Many thanks to Toppie Smellie, Princess Mykah and (belatedly) George W for their contributions. All content of this episode is Copyright Paul Chandler, 2018.  Episode 162 was recorded on the 8th April 2018. The SUTTON PARK clips included here were originally recorded back in May 2000.

My next episode was our LIVE show for April... We had Cromitty and Yeti Uncle John in the studio and Trowby, Lisa and Toppie Smellie in the chat-room! All that and recorded messages with some ghosts!
THE SHY LIFE PODCAST - 163: LIVE PRIDE48 SHOW - APRIL 2018...

Here we are for episode 163 - which is our live Pride48 show for April 2018! This time we have two of the regulars in the studio keeping an eye on the chat-room - not to mention messages from some ghosts that Paul met in Kent during his recent holiday. The recorded version of this show includes a bit more chat from Kent - SUTTON PARK clips and a short prose piece as EXTRA material. Our next episode, number 164 sees Paul chatting with an extra-special guest from one of Pride48's finest shows... but you'll have to wait until nearer the time (or listen to THIS very show) to find our who! Do join us, won't you?! Please email me at shyyeti@yahoo.co.uk if you have any comments - you can even send me a sound-file and I'll include it on the show. The music is by Shy Yeti and Luca. Sound effects by Paul Chandler and Soundbible. Many thanks to all those who turned up in the chat-room during the live show, especially Andrew T, Lisa P and Toppie Smellie. All content of this episode is Copyright Paul Chandler, 2018.  Episode 163 was recorded live on Sunday 15th April 2018 - with extra material recorded between 27th March and 12th April 2018. This episode also includes a number of clips from episodes of SUTTON PARK recorded during the early/mid-1990s. Thanks to Andrew T, Andrew R and Nick G for their appearances in this archive footage so many years ago.

To conclude with this time - our next episode was an interview with Dr Wesley Stone from L.O.T.S.L.!

Here we are for episode 164 in which we chat with Dr Wesley Stone from the L.O.T.S.L. Little Show. Mr Yeti has been looking forward to this for ages and I think you'll agree that it's a fun chitter-chat, well worth the wait! Paul and Wes discuss music, films, TV, travel, food, hobbies, books and exactly how Dr Stone became involved in podcasting in the first place! There is so much to talk about that the regulars don't get much of a look-in; but that's okay - they deserve a week off sometimes. Our next episode, number 165 is coming soon - but we're not completely sure what it's going to be about!  Do join us, won't you?! Please email me at shyyeti@yahoo.co.uk if you have any comments - you can even send me a sound-file and I'll include it on the show. The music is by Shy Yeti and Luca. Sound effects by Paul Chandler. All content of this episode is Copyright Paul Chandler, 2018.  Episode 164 was recorded on Thursday 12th April 2018.

Next up - one or two more photos from my week off down in deepest darkest Kent... The weather wasn't that great and I didn't wander too far - so I really didn't take that many photos at all, I'm afraid.

A BRIEF GALLERY FROM KENT... 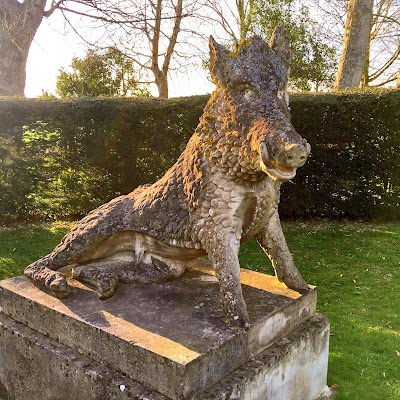 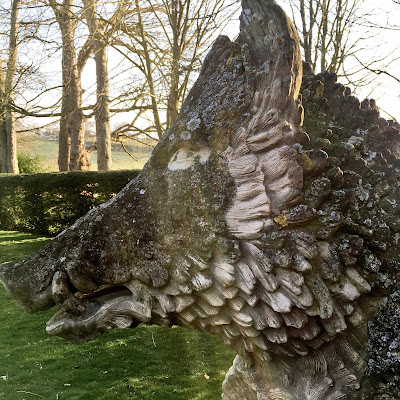 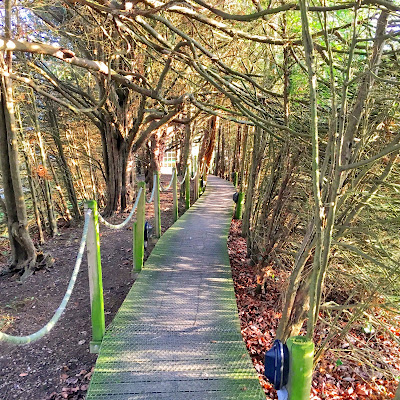 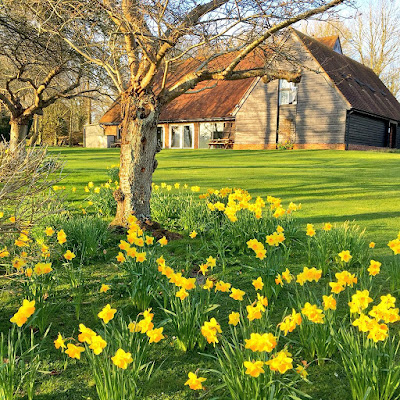 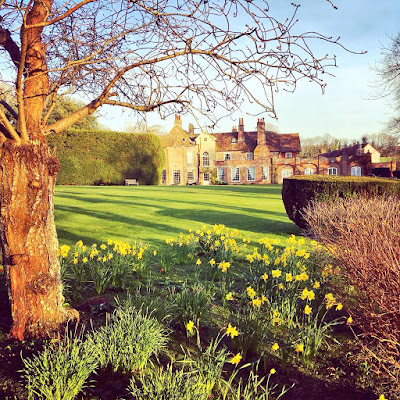 I had a very smooth trip down to Folkestone listening to lots of pop music to help me on my way; it made for a bit of a change from podcasts... (Thanks Kylie! Loving the new album!) I did nip out into the garden for a little while before dinner, took some photos and recorded for one of the podcasts that I worked on during my stay. It was one of the few occasions that I went out when the weather was sunny! There was sun a couple of other times - but I was busy inside and missed out. The rest of the evening I worked on podcasts and watched TV.

I woke up early on the Saturday to record with Toppie Smellie! It was well worth it and we recorded enough for a full episode and I put something away for the Halloween episode later in the year. A lot of what we recorded became part of episode 162: WHAT I GOT UP TO ON FRIDAY THE 13TH. The rest of the day I spent working on new podcasts - both editing and recording and I also released episode 160: MUSIC ON YOUR BIRTHDAY.

On Sunday I began work on editing my next episode and started to record my Friday The 13th show - recording in the flat and also briefly in the garden. I enjoyed working on this episode as it allowed me to be very silly whilst sounding very serious and committed! The rest of the day was spent watching DVDs.

Monday was my busiest day by far... In the morning I headed to Canterbury by bus and then headed for the Curzon cinema to see Wes Anderson's latest - Isle Of Dogs. (Loved it!) Whilst there I began to record for a future episode of the podcast involving the return of some old villains of the show! I can't say too much for the moment... I also managed to visit HMV and a cafe that had been recommended to me before heading for the shops and then getting a bus back in good time to "'ave me tea." More editing and TV watching followed!!

Technically my Monday/Tuesday blended into one as I was up very early Tuesday morning to record with the L.O.T.S.L. team; but it was well worth it, as always... Once I'd had a bit more of a snooze and done more TV watching and editing - I did make it outside for a bit of recording; but not for terribly long! I managed quite a bit of recording today - completing the episode that I had begun in Canterbury the day before!

On Wednesday I didn't do a great deal other than watching TV and editing - although I did record an article for ROUND THE ARCHIVES about the 70s Sid James comedy show, Bless This House - which required me to watch some episodes and also the 1972 movie; which I rather enjoyed. I also finished editing and released episode 161 of the podcast: WHAT'S WITH ALL THE QUESTIONS!? (VACATION EDITION) and moved straight on to episode 162 concerning Friday The 13th.

I didn't go far on Thursday either as it was another misty day - although I did make it outside for a while for a spot of recording in the afternoon. However it was another busy recording day - finishing one episode, recording bits of my 2018 Halloween episode and doing one or two little messages for Big Fatty. Around tea-time I also got to record a whole episode with Dr Wes Stone from L.O.T.S.L. for episode 164; something I've been looking forward to doing for a while... A very nice chat.

Today I headed home and was back by early afternoon! Another smooth journey! It was a good holiday all in all, but it flew by and I would have liked to have gone out more; maybe next year!

Next time I'll be looking ahead to my trip to Denmark and we'll have more podcasts to discuss... 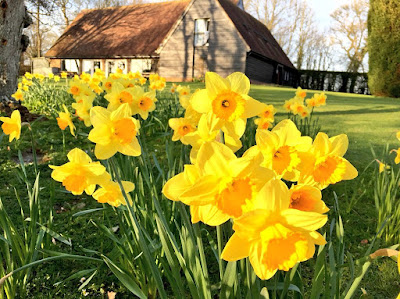 April is coming to a close - but here are some of the episodes that we hope will lead us into May...

In which Ikk goes for checkup after his recent troubles... Will he get a clean bill of health?

Nick and Andy answer some of Paul's random questions and Nick also tells the listeners about his new book.

A week earlier than usual and Mr Yeti fits in a quick live show between two holidays! Thanks yeti!

172. Digging Into Unheard Of Places

173. Return Of The Brompton Time Machine 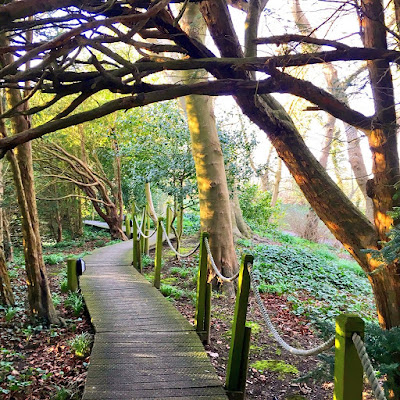 This post and all contents are Copyright Paul Chandler, 2018.
Posted by Paul Chandler at Wednesday, April 25, 2018