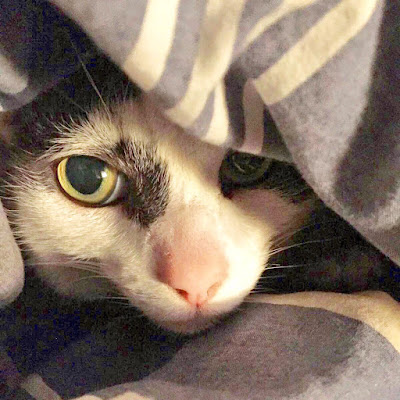 A VERSE OVER SEVEN YEARS IN THE MAKING!!

This week I'll be sharing with you my first poem of 2018 - although strictly speaking it was my last poem of 2017; not that I've written many new ones in the last 12 months... Having said that I do feel like 2017 was quite a poetic year as I presented a good number of them during the 90 or so episodes of the podcast that I released - many of these poems I'd never performed previously at shows. It's nice to preserve them in an audio format - not just relying on the blog or the printed collections.

By the way, I'd like to thank Toby for the lovely photo of Deeley that I'm using at the top of the page - Deels was defiantly claiming Toby's duvet! My cuteness was involved in aforementioned defiance! :)

First up this time I'd like to share with you my two most recent episodes of the podcast...

Here we are for episode 137 in which Mr Yeti returns to Salisbury where he chats with Nick Goodman and their mutual friend Andy C; Andy and Paul started off as pen-pals in the late 80s, but that's just the beginning of the story... There are also some clips from early Sutton Park episodes that Andy appeared in - as well as a previously unreleased comedy sketch recorded back in 2000! Our next episode, 138 is officially sanctioned a very special friend of the show - our purry pal, Deeley The Cat! Do join us, won't you?! Please email me at shyyeti@yahoo.co.uk if you have any comments - you can even send me a sound-file and I'll include it on the show. The music is by Shy Yeti and Luca. All content of this episode is Copyright Paul Chandler, 2018.  Episode 137 was recorded between 2nd and 4th December 2017, with material from the archives dating back to the 1990s.

Our next episode was all about cats...

Here we are for episode 138 in which Mr Yeti remains in Salisbury to talk with friends and family about cats - yes, CATS! Guests this episode include Nick Goodman, Andrew and Lisa from the Round The Archives podcast and also The Yeti Mother! (i.e.: mum! Not to mention more briefly - my dad, brother and niece!) Thank you guests!! There are also some cat poems  - the regulars give their informed opinions - and Mr Deeley shares a few mews with us himself! Our next episode, 139 is a "lost" episode that focuses on the aliens! Do join us, won't you?! Please email me at shyyeti@yahoo.co.uk if you have any comments - you can even send me a sound-file and I'll include it on the show. The music is by Shy Yeti and Luca. All content of this episode is Copyright Paul Chandler, 2018.  Episode 138 was recorded between 24th June 2017 and the 14th January 2018.

Before we move on to this new poem that I've been promising - I thought I'd give you a rough list of episodes that I hope to put out over the next month or two. I'm not committing to this order - but it's the one that I'm working to at the moment. If something else comes up - or I get to interview somebody then that will probably be prioritised; but anyway...

This is actually an episode that I began recording in the first half of 2017, but which never got finished. It was actually going to be two different episode - one of them a story about one of the cast finding a tape with an "alien song" on it and another episode about the aliens recording a documentary about humans. Quite a lot of material was recorded - so I am planning on collecting it together as a "lost episode" and recording whatever linking material is required to make it work.

These three episodes form a trilogy involving Ikk being ill - which also filters into the January 2018 live show on Sunday 21st January 2018 and will then be resolved in the following episode.

143. Bettina and the robot butler

Paul returns to where he worked 20 years ago and shares clips from Sutton Park which were recorded during his time living in the same area, between 1996 and 1998.

150. Return Of The Brompton Time Machine

This one has also been hanging around for a while - in fact I started work on it when we lasted visited Brompton Cemetery in early January 2017... I recorded scenes with a number of guests throughout the year

Other episodes that are in the pipe-line include the inevitable (in a good way!) Live March 2018 episode of the show, more about Dusty - the missing scone-eating plant, an April Fool's episode and the much-mentioned Murder Mystery Weekend episodes - another collaboration with The Smellcast team. I've also got one or two interview episodes that I'm hoping to record over the next few weeks.

Other than the newly completed poem, that's all for now...

P.S. The following poem was written between the 12th April 2010 and the 21st December 2018. The first 28 lines written were written on the 12th April 2010 - but then no further work was done on it until I returned to it briefly on the 8th September 2017, finally finishing it off between the 14th and the 21st December 2017. I made a few more changes before posting this on the 16th January 2018 and may still make further rewrites before including it in any future collection. 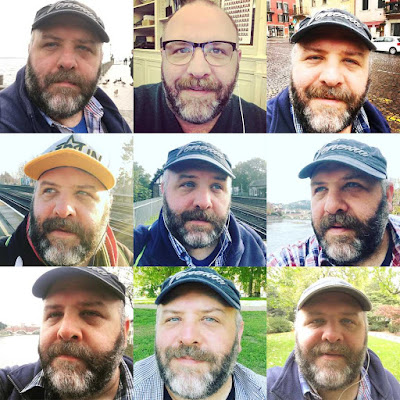 
She has bite…
She's got pizazz!
Well, that's not something -
Every no-one has…
She's got the WOW!
She never quits!
With fake tattoos -
And show-biz glitz!

She's got style -
Like few before her…
The Paparazzi -
Do so adore her!
Fortune is her -
Bestest friend!
Fame may suffocate her -
In the end…
Unless, that is -
She kills it first!
Confronts it hard -
And does her worst!
You need to pause -
Be at the ready…
Should she approach -
Be sure, stand steady.
Save face, don’t let -
Her see you’re shaking!
Pretend it’s selfies -
That you’re taking!
Then saunter up -
When she’s not looking!
When she’s asleep -
Or maybe cooking…
Just make out that -
You like her fashion...
Show she’s in charge...
Admire her passion!
Folk laugh at her -
When e'er they see her…
But every one of them -
Would love to be her...

You'll be left reeling...
Your head will spin...
Enjoy the feeling... 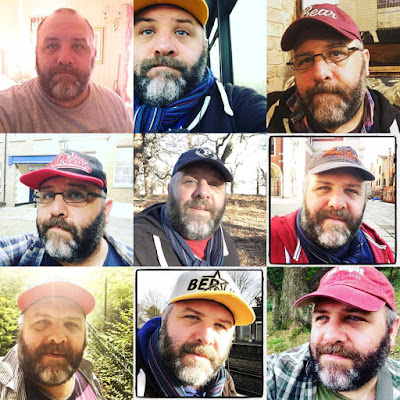 This post and all contents are Copyright Paul Chandler, 2018.
Posted by Paul Chandler at Tuesday, January 16, 2018