JERSEY ON MY MIND... 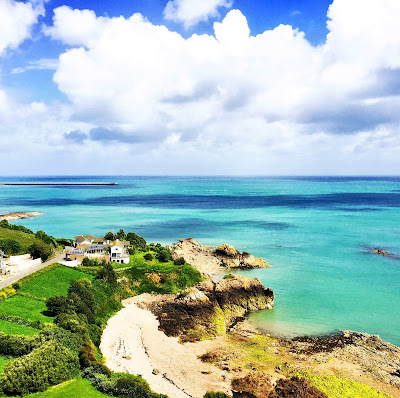 RETURN TO AN OLD HAUNT...


It's been a busy couple of weeks! Last post we were in Hamburg - this time I am returning to an old haunt! Just so you know, this isn't a ghostly post - no, I was simply back in The Channel Islands for the first time in about 10 years.

Here is all the information you need to know about the last three podcast episodes...

Here we are for episode EIGHTY THREE - where this time Ikk's Uncle Toppie sends him a special gift all the way from Pickle Hollow. It all should be so simple and such fun except that things don't quite take a smooth path. Also this episode we also talk briefly with Harry F and Paul tries yet fails to avoid an Explicit rating! Thank you to Toppie, Harry, Calum and also to Big Fatty for use of clips from Big Fatty Online. Our next episode, number 84 - should be out in about a week - maybe sooner! Do join us, won't you? Please email me at shyyeti@yahoo.co.uk if you have any comments - you can even send me a sound-file and I'll include it on the show. The music is by Shy Yeti and Luca. All content of this episode is Copyright Paul Chandler, 2017.  Episode 83 was recorded between the 17th March and the 29th May 2017.

Here we are for episode EIGHTY FOUR - where this time we meet a number of friends of the show who we have only heard from or about fleetingly in the past... These include a friendly zombie called Henry, a mouse called Gladstone, a wood louse named Oliver, Dameus's sister Tallulah and the infamous Bella Crabb! Our next episode, number 85 - should be out in about a week - maybe sooner! Do join us, won't you? Please email me at shyyeti@yahoo.co.uk if you have any comments - you can even send me a sound-file and I'll include it on the show. The music is by Shy Yeti and Luca. All content of this episode is Copyright Paul Chandler, 2017.  Episode 84 was recorded between the 17th March and the 12th June 2017.

Here we are for episode EIGHTY FIVE - where we take a little trip away with Paul and Toby to (Old) Jersey, one of The Channel Islands which lies between Britain and France. Don't worry - we still catch up with the regulars and also have two or three poems. Thank you to Toby W for his guest appearance during this edition! Our next episode, number 86 - will either be our 9th live Pride48 show, as broadcast on Sunday 18th June 2017 at 4pm (EDT) / 9pm (GMT) or alternatively it won't be - it'll be something else! At any rate it should be available to download in the next few days. Do check it out, won't you? Please email me at shyyeti@yahoo.co.uk if you have any comments - you can even send me a sound-file and I'll include it on the show. The music is by Shy Yeti and Luca. All content of this episode is Copyright Paul Chandler, 2017.  Episode 85 was recorded between the 4th and the 14th June 2017.

I've got photos to share with you from my Jersey trip - but first here is a mini diary of what I got up to. Needless to say I was recording for the podcast whilst I was away and the fruits of that are already available as Episode 85 of THE SHY LIFE PODCAST!


Toby was a little unsure about us flying from Southampton - I booked flights from there, partly for a change and partly so we could avoid the rush-hour busy-ness going into Gatwick. What I hadn't considered was how much a ticket to Southampton airport would turn out to cost! Still, the journey was quick - and the whole experience went smoothly. We even got to spread out a bit on the flight. Once in Jersey we were quickly aboard the Number 15 bus to St Helier (thanks entirely to Calum's research into the subject) and once at our destination we checked in immediately - pottering into town for a quick look around the shops. The only negative was that the weather wasn't great and it started to rain; but we did have burgers (Burger King) and I did manage to record a little for the podcast. The rest of the evening we spent watching travel documentaries and old episodes of Grand Designs!


The weather improved today and I got some lovely photos - however it was extremely breezy, to say the least. All the same we hopped on a bus to Gorey and went to the castle - eventually reaching the very top which was great fun and I got some good recording done there too. I also came up with an idea for a short story, which is now written and will be posted here next week. Thankfully we had our lunch with us and sat up at the top of the castle just enjoying the view. In the afternoon we went to the cinema and saw Alien: Covenant - which we both loved and then had dinner at TGI Friday; where I had Sea Bass, mash and veg!! Once again we finished the evening watching documentaries.


Today we took the bus around the coast - slightly on from Corbiere and St Ouen's Bay. To be honest Toby wasn't really into it and so we came back towards St Helier pretty quickly. I may need to go back to The Channel Islands sometime and just sit on the rocks watching the world go by. I could do that every day and just watch the sea coming in whilst listening to podcasts, writing and Tweeting; I really could. We ended up having lunch in St Brelade's Bay and walked up to the church and I managed to record more for the podcast.That evening we had Italian at a restaurant next to the hotel and then spent the evening watching more documentaries. One of the nights - I think it was Wednesday, we watched the movie, Lucy too - which I'd not seen before but was pretty enjoyable.


Toby was feeling a little frazzled and sun burnt after the last few days - the breeze was distracting us from just how warm it was. We ended up staying in St Helier and going to the museum and art gallery - which had an exhibition linking the plots of Bergerac episodes into various "issues of the 80s". It was quite good fun - but the link with the show was pretty tenuous and it didn't look as if they had the rights to show many clips or photos from the show. We had pasties for lunch and an iced coffee whilst we killed a bit of time before heading to the cinema again in the afternoon; this time we saw the new Wonder Woman film and once again headed next door to TGI Friday for dinner. Same plan re: evening TV watching too - although we did see the first 1984 episode of Top Of The Pops as part of the BBC 3 repeat season.


We headed home today, but we weren't flying until 18:30 and so after breakfast we headed for St Aubin and got to sit and watch the sea for a bit - having a lovely fish and chip lunch in a pub that had once upon a time appeared as "The Old Barge" during early seasons of Bergerac. I didn't even realise this until we were sitting there and I began to google. We later sat in the shade and ate Cherry and Strawberry Jersey milk Ice cream and then returned to the airport around 15:30. Time passed quickly and we got home in good time - stopping at the airport to have sandwiches for dinner whilst we waited for our train to arrive. We were home just after 22:00 and Deeley was very pleased to see us; especially Toby!

As promise, next up I have some photos for you, which I hope you'll enjoy... 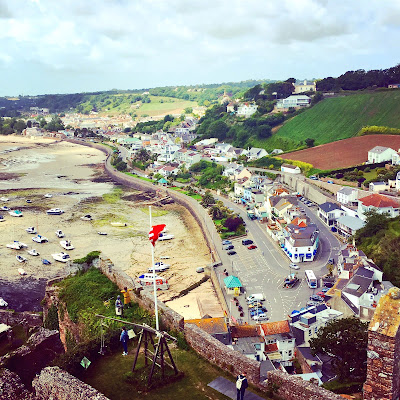 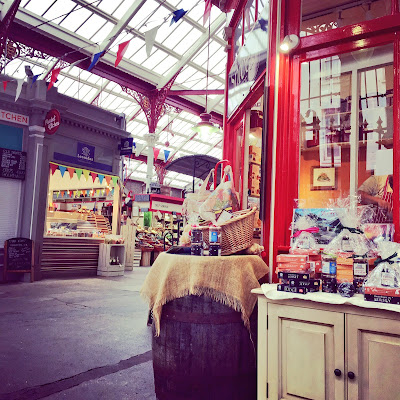 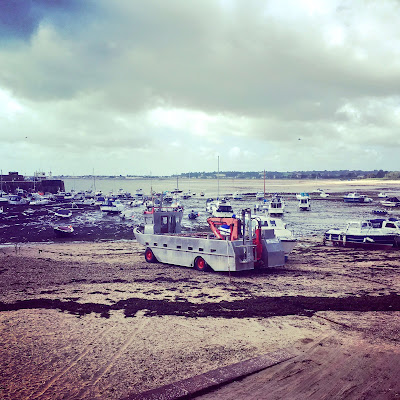 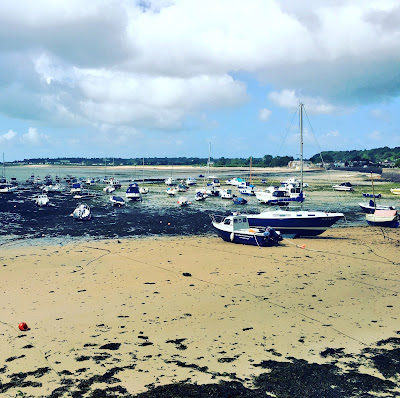 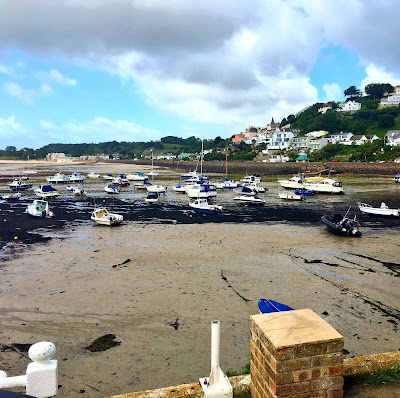 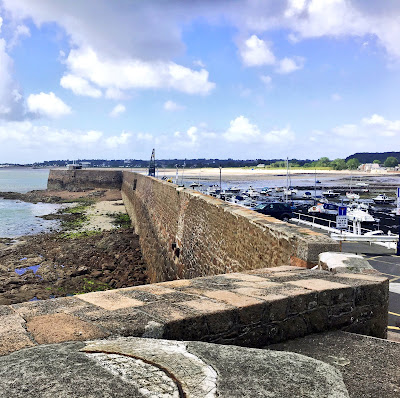 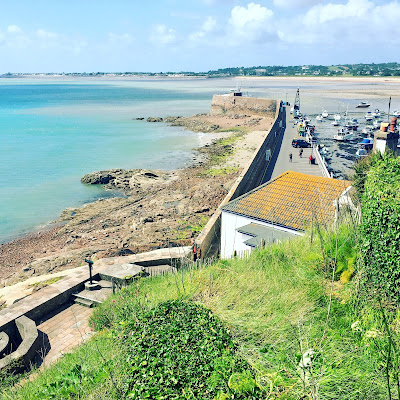 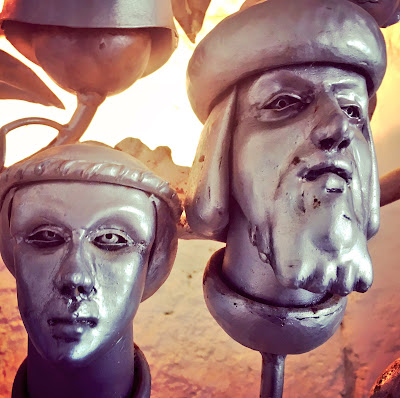 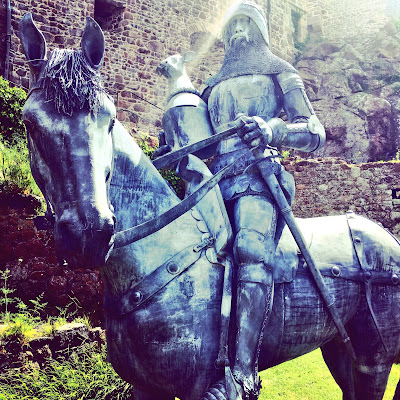 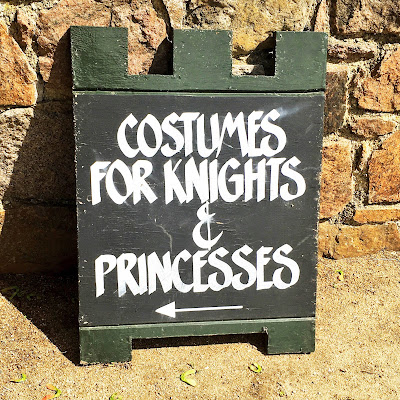 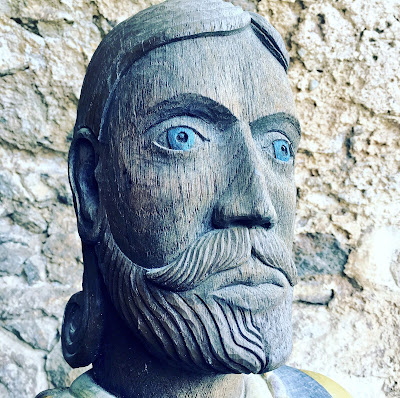 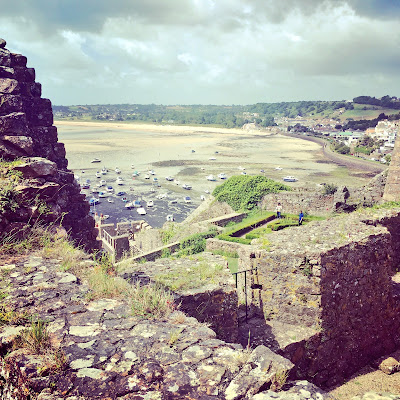 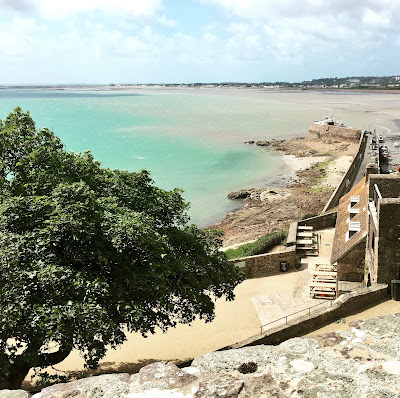 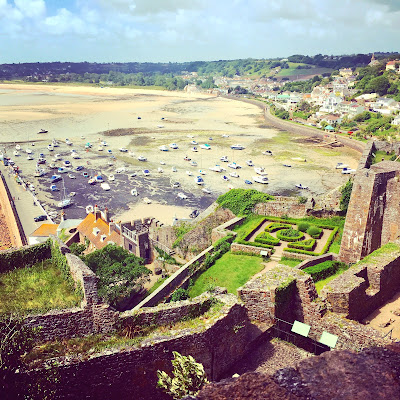 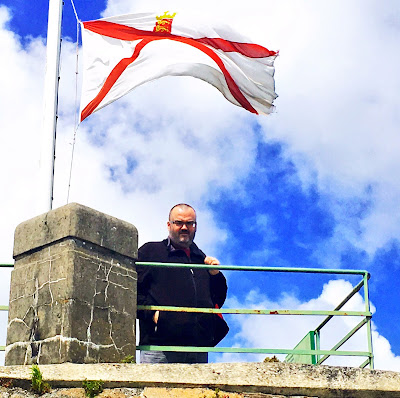 There will be further photos from the trip next time when I post that little story that I mentioned earlier. Next time I can also promise mre about my latest podcast episodes; my next live show on Pride48 is almost upon us - in fact it's this weekend: Sunday 18th June 2017 (@4pm (EDT) / 9pm (GMT)! I am also taking part in the Live Pride48 Streaming Weekend on Saturday 24th June 2017 at noon (EDT) / 5pm (GMT) - so it's all busy, busy, busy at the moment! Exciting, though!

I'm afraid that's all we have for you this time; well, maybe one or two more photos - but that really will be it! 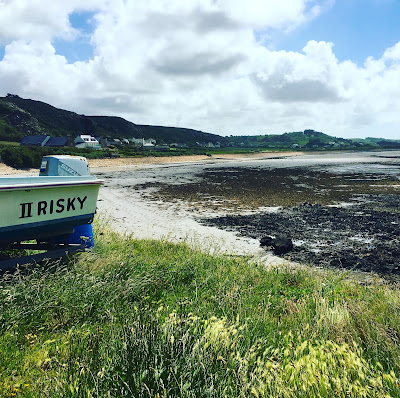 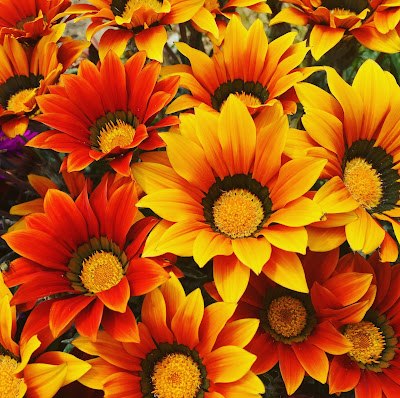 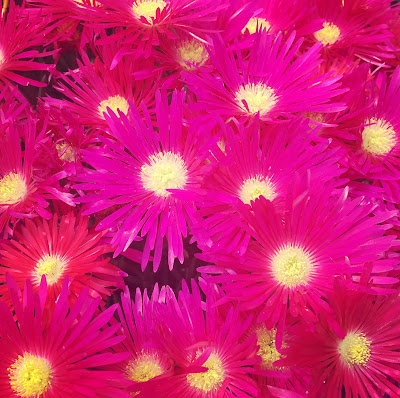 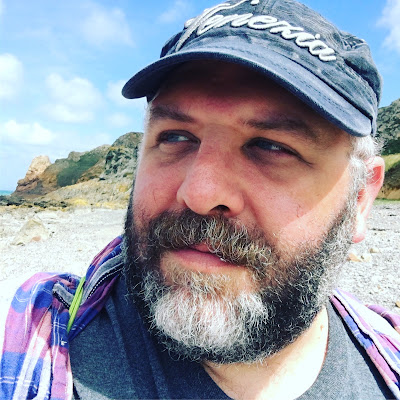 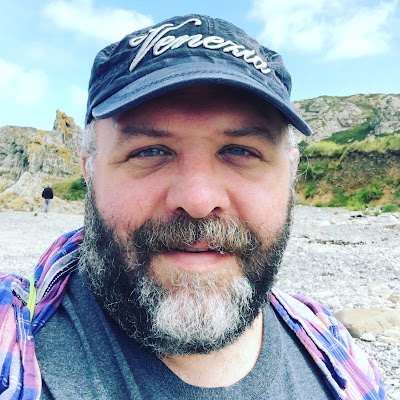 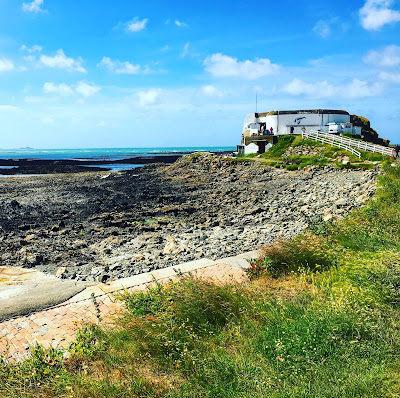 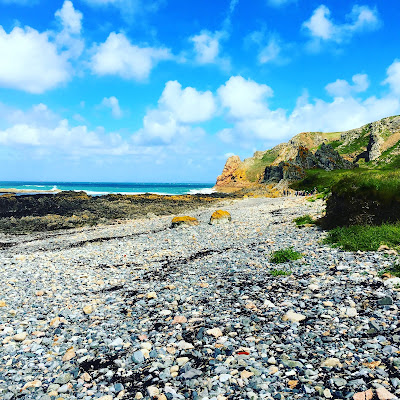 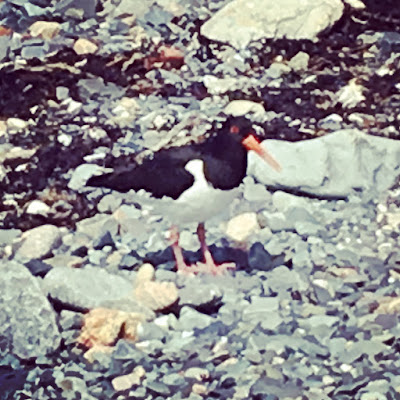 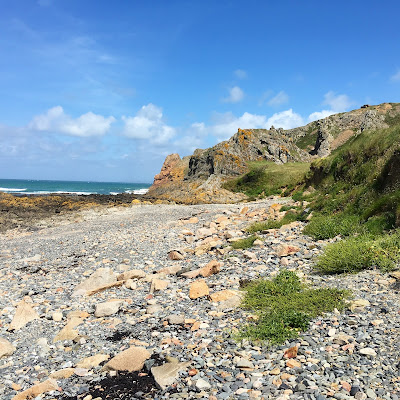 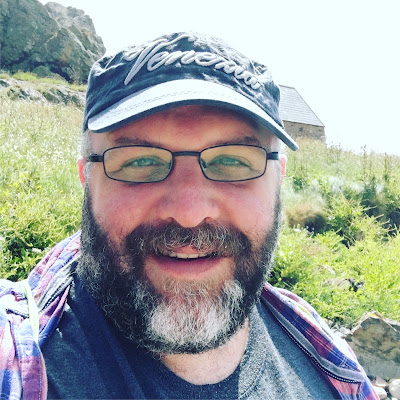 This post and all contents are Copyright Paul Chandler, 2017.
Posted by Paul Chandler at Friday, June 16, 2017