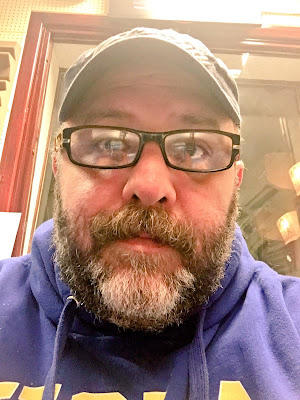 
Just a quick post this week - with a reminder about my next live show and also some links to our new podcasts...

I'm a little bit snuffly at the moment and I seem to have given my cold to all our show regulars when we met for a podcasting meeting the other week, but I'm hoping I'll be in full voice by Sunday. Unfortunately the regulars all sound very blocked up in the messages that they have sent me to play on the show! Sorry everyone! Still, some of the gang have promised to log into the chat-room on the night - so do come and join us. We're going to be discussing my recent visit to Radio Wey and hopefully - depending on who is in the chat-room - we may chat about other people's experiences of theatrics, school plays and the like... 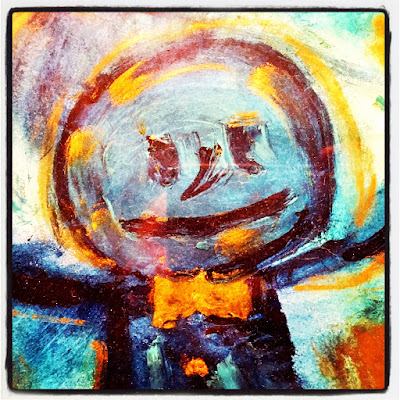 Next up here are the details on the new podcast episode...

THE SHY LIFE PODCAST - 53: THE FAMILY THAT PODCASTS TOGETHER...

Here we are for episode FIFTY THREE - where we reacquaint ourselves with Mr Yeti's family - his mum, dad, brother and crazy niece! All that and some of the regulars pitch in to comment. Our next episode, number 54 will be out soon!! Please email me at shyyeti@yahoo.co.uk if you have any comments - you can even send me a sound-file and I'll include it on the show. The music is by Shy Yeti and Luca. This episode and all contents are Copyright Paul Chandler, 2017. Episode 53 was recorded between the 29th December 2016 and the 9th February 2017.

Here we are for episode FIFTY FOUR - where this time we really get gossipy! I'd tell you who our special guests are - but that would gossip itself and I think this episode works best if it's a bit of a surprise. All I will say is that all the regulars are in place and a number of rumours are explored; including one about Poodle McNoodle from the Big Fatty Online show. Our next episode, number 55 - sees us heading back to the 1980s - the episode after that will be our 5th live show, broadcast live on Pride48 on Sunday 19th February 2017 (4pm EDT / 9pm GMT)!! Be there or be triangular!! Please email me at shyyeti@yahoo.co.uk if you have any comments - you can even send me a sound-file and I'll include it on the show. The music is by Shy Yeti and Luca. Big Fatty Online clips copyright, Big Fatty 2017. This episode and all other contents are Copyright Paul Chandler, 2017. Episode 54 was recorded between the 4th and the 12th February 2017, with additional older clips from Big Fatty Online.

Since I last posted here, I made another visit to Radio Wey with my friend Tim Mitchell and his old school friend, Nathan Jones - on Saturday 11th February 2017, this was exactly five years to the day since my visit there back in February 2012. I read a number of valentines-ish poems which I recorded and am aiming to play on my live show next week, 9pm GMT on Sunday 19th February. I'll play a couple of them live during the broadcast and keep some of the chat and the remaining poems as extra material for when the show is released as a podcast.

The poems I read on the night were:

Looking back, the first three of those I also read when I was on that Valentine's Day show five years ago - this was also around the time that I had put together my compilation, CACTUS HEART which collected up all my more romantically-themed poems. 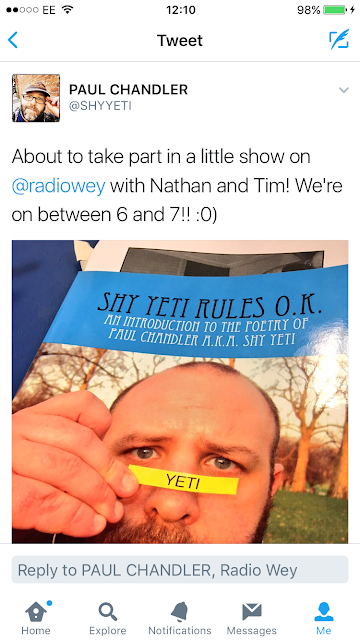 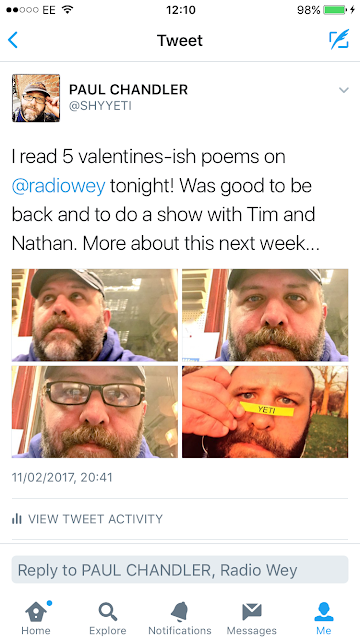 Thanks again to Tim for inviting me back on to the show! If all goes well then we're aiming to record together again in late April.

Next time there will be more talk of podcasts and either a Shy Yeti script or more details on my new book, which I expect to release before the end of the month...

This post and all contents are Copyright Paul Chandler, 2017.
Posted by Paul Chandler at Thursday, February 16, 2017