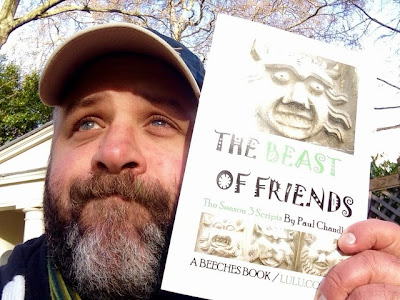 Do you like the new site? Look at all the wondrous changes we've made!

Okay - so very few changes, but we are no longer really MY OWN APPLICATION AS PEOPLE'S POET, but instead SHY YETI'S SHY PLACE... At least for a while anyway! I just thought that maybe I should slightly retitle the site in the way that I'm now Shy Yeti rather than The Daffy Poet - not that I ever really used that title anywhere but on the site.

I'm sure you've been aware that over the last four or five years my books have been more than just about poetry - but also about the prose and short stories that I have been writing. I have a new collection of poems and prose out in a month or six, A YETI WAY OF THINKING - but other than that I spent most of 2014 writing scripts and only very few poems.

What I guess I'm trying to say is that this blog has long been about my writing in general rather than just about my poetry. We've been together since 2001 - I think we can cope with this slight change. We can, can't we?! Good...

So, enough with the heavy - let's move on... It's time to announce my first book of 2015 and this one ISN'T about poetry, it's the third instalment of my series, THE BEAST OF FRIENDS - although it can be read as a standalone adventure whether you've read the previous two or not... 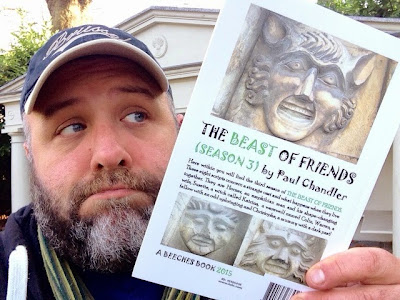 THE BEAST OF FRIENDS - SEASON THREE!!!

THE BEAST OF FRIENDS - Season 3 is the third season of eight scripts concerning a number of curious characters; an amphibian journalist known as Horner and his shape-changing wife, Suzette, a witch called Katrina, a werewolf named Colin, Warren - a fellow with a very strange upbringing and their new housemate, Christophe - a mummy with a dark and mysterious past! This season, written between 2013 and 2014 continues to explore their adventures - all under one roof! This book is 144 pages in length.

THE BEAST OF FRIENDS - SEASON THREE

This is the third season of THE BEAST OF FRIENDS which is set in a boarding house in Fulham. The house is owned by Horner. The first episode picks up from the end of the second season and the following seven episodes investigates the impact of the arrival of some of the newer characters in the household. Here's a little about each of the main  characters.


“Horner” is a writer who most of the time appears to be an ordinary human – accept that once or twice a year he goes through his “Skin-time” in which he goes into a coma and sheds his skin and becomes a psychotic amphibian. He is the main character in all the episodes and at the end of the second season he got married…

Suzette is Horner’s new wife… She is a shape-changer, which Horner didn’t know when he married her – he thought that she was a frog who had been transformed into a princess by his kiss. He’s a romantic fool. Suzette is far from a princess!

A Werewolf with “unconventional lycanthropy”. He is changed by a list of rather odd causes which have very little to do with the moon. During his time in the house he has become best friends with Horner, Warren and Katrina.

Warren is a nervous gay man – although he is getting bolder. His parents are rather weird and they didn’t take very well when Warren didn’t turn out to be as odd as the rest of the family. When he came out to them he told them that he was also a clairvoyant vampire – which he isn’t. Warren hopes, one day, to discover what IS different about himself – but maybe being normal is what makes him different!

Once a force for evil, Katrina is now a reformed character where black magic is concerned; more recently has been struggling to kick the drink. She occasionally gets work as an actress and, of late, has become best of friends with Suzette.

Christophe is a mummy… or is he? Well, he’s certainly wrapped in bandages – but absolutely anybody could be underneath. Colin allowed him to move in to the spare room whilst Horner was getting married and loads of other things were going on… 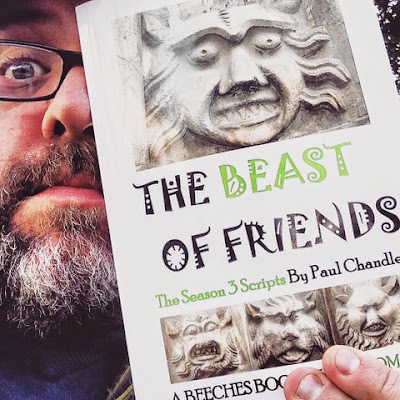 Scripts and further information to follow... There aren't too many spoilers - but enough info to intrigue you, I hope...

SCRIPT 1: AFTERMATH OF A BIG DAY…

Script 1 allows us to look back at Horner and Suzette’s big day to see just how it all ended – we also learn more about what’s up with the new house-mate, Christophe!

Suzette’s niece comes to visit and is fixated by Christophe’s bandages! Will she have her wicked way with him? Will we finally learn exactly who dwells within?

SCRIPT 3: KATRINA GETS A DAY JOB…

Katrina has agreed to help run her friend’s newsagents for her – however Katrina is not feeling well herself – for she is suffering a cold that has trained her magic powers. Meanwhile, Colin gets ever more suspicious about Christophe…

Colin finds himself unable to control his transformations and he suspects that Christophe has somehow caused this. Will Warren believe him and can he help?

SCRIPT 5: THE RETURN OF THE TERRIBLE TWO…

There is trouble brewing between Clive and Cromitty – both of whom are back in town and in the middle of a professional feud. Meanwhile, Christophe attempts to hypnotise Suzette and Colin is about to set forth on his greatest adventure to date.

SCRIPT 6: THE END OF… WHATEVER!

Clive has a devastating message for Christophe, Colin has an explosive encounter and a fight breaks out between the housemates just as Horner finally sees sense…

Warren's mother, Ashley, offers him the opportunity to be remembered forever whilst Horner attempts to find out what has happened to Colin and Suzette has a present to deliver to Christophe. The end of the world is also still nigh!!

Christophe finds that the tables are beginning to turn on him – but the game is not yet won. Clive and Cromitty reveal their game plan and more than one house mate is soon to meet their maker…Who will live? Who will die? 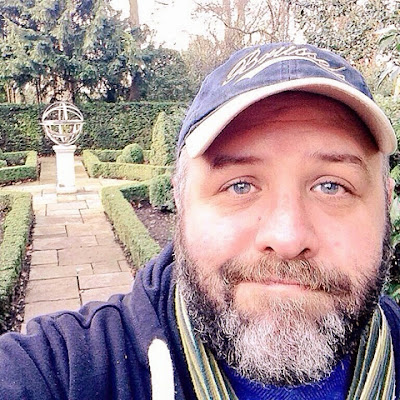 Before we finish here's a daft extract from script 5...

A BELL RINGS AS THEY ENTER – A YOUNG LADY DRESSED LIKE A YAK STANDS BY THE TILL; SHE IS FILING HER NAILS WITH HER ANTLERS.


Hello! Can I help you at all? My name’s Lucy by the way… Pleased to meet you!


Pleased to meet you too! I like the yak suit… That really is super cool…


Cheers… It’s just my way of expressing myself… You should get one too!


I really think we should. Do you think they have an ant-eater one?


And what about badgers? I’ve always thought that I might be the reincarnation of a badger… Black and white stripes have long been my favourite type of stripe…


Oh god! Me too… Although I fancy a zebra-suit myself… I just need to save up!


I take it that these are all synthetic… Not real animal skins? No, of course not…


I guess it’s a warning that although she may appear to be just a pretty young girl at heart – that deep inside she is a raging beast with a great deal to say for herself?


YOU really are a girl after my own heart… Even though the idea of me having rumpo with cute dudes probably makes you want to hurl… It does still happen!


I’m pleased! It’s reassuring in a way… Just shows there is indeed hope for us all…
WARREN: (rambling – from upbeat to depressed)


It is, isn’t it? Still… She does look pretty good for her age! She is FAR older than you’d think! That said, don’t listen to me, I’ve been permanently disturbed by being taught the facts of life by my mother… It was pretty traumatic – there were hand-outs, slides, demonstrations – the works. And she didn’t just teach us human reproduction either – she went through everything from vampires to space aliens!


Oh… You poor love… That woman has a lot to answer for… Us witches get a bad name sometimes, but really – your mother oversteps the mark every time!


Hearing that disturbs me even more! I guess in truth I just like dressing up as furry things; tomorrow I’ll be an elk, on Thursday a deer and Friday I’ll be an antelope!


WARREN: (politely – getting back on track)


Wow! Look, we’ve actually come here because we’d like to buy that clock over there… Is he still for sale? We’re very enthusiastic about purchasing him…


LUCY: (levelling with them)


He is for sale, but he’s very old though; I’m not sure how his innards are doing!


That’s fine! We know him! He ended up here by mistake; may we buy him back?


Oh no! It was a mistake! We’ll happily buy him back… Hi, Clive… How are you? 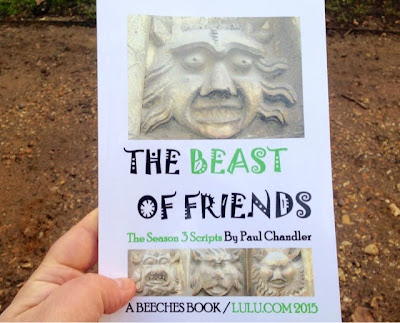 Well, I hope you enjoyed that! Just to let you know - I am hoping to release the following books this year - although the dates are a little vague at the moment; but here goes it...

JANUARY: THE BEAST OF FRIENDS - 3

SEPTEMBER: THE BEAST OF FRIENDS - 4

I'm also planning to do at least two Poetry Café shows - but don't have dates yet as they only book three months in advance and I don't intend to do a show until at least April or May. I'm definitely intending to do shows for POETIQUETTE and A YETI WAY OF THINKING and then we'll see where that takes us in the year. More information when I have it!! 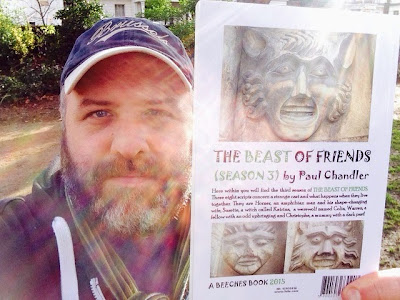 Next time I'll share a few more of the photos... I'll try not to leave it so long next time! 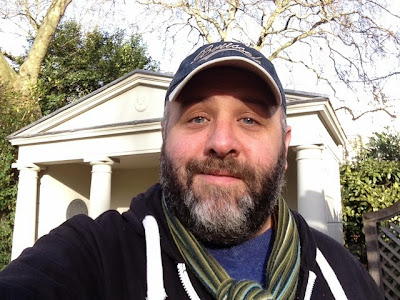