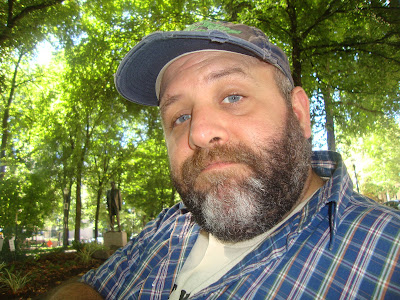 This week I'm reporting back from my trip to the States from late last month... Yes! Yes! I know, I got back over a week ago! Blame it on a mixture of jet-lag, going back to work and not getting around to downloading my holiday snaps quicker! I am, however, glad to be able to announce that I filmed a whole new episode of SHY YETI ON LOCATION during the trip - not that I'm getting on especially well with my editing at the moment. Anyway! I will eventually!

Anyway, onto this week's post... Yes indeed, it's another of my travelogues... With photos, of course!!

It's a little early to report much, other than a successful, yet long journey to Portland via Heathrow airport where a nice brunch was had before departure. The first part of the trip involved a rather endless flight to Washington DC, although there were some good films on offer. (See list later in the post) On arrival I managed to buy a Washington DC baseball cap and t-shirts from the airport before flying on to Portland! Well, I sort of went to Washington... I need merchandise to prove it! During the flight I also did some work on a new poem called CEDRIC THE CEREAL KILLER which I'd already written two verses of on the way back from a B52s concert the previous night. Oh, and when we got to Portland there was a vampire at the airport... Okay, well not quite - but there was a bat flying around inside the terminal!! Not sure quite how it got in there. I do hope it reached its destination eventually! 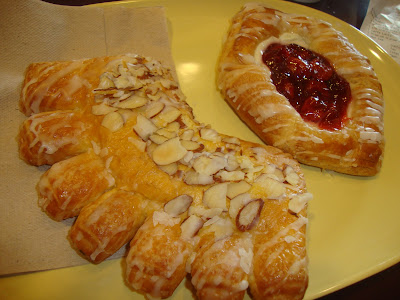 Having slept well, I went for a very good breakfast across from the flat and took photos of the sweet and savoury options that were on offer. I sampled some too, naturally! Other than a brief intro for the new Shy Yeti On Location series I filmed very little today - but I did go shopping for books, trainers and clothes for yeti dancing in! There's plenty of time for filming later, I reasoned and I was right! The last time I was in Portland was in July/August 2011 - so I was on the lookout for some new locations to film during this trip; intending to read from the 10th anniversary edition of THE AUTUMNAL E.P. 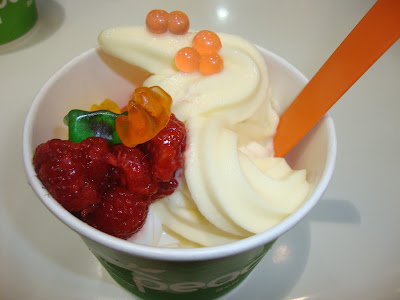 After a few small hiccups with the bank - where they thought I was a thief in America stealing from my own bank account! (I wasn't, but I guess I appreciate their concern even though it cost me 40 quid in phone calls to sort it all out! *cries*) Before leaving the flat I recorded my first poem of the trip; FIREWORK from THE AUTUMNAL E.P. and then headed downtown via Denny's for further shopping at Target and Powell's where I picked up books by Stephen King, Pearls Before Swine and Patricia Highsmith. I also got to see the awesome new Woody Allen film, Blue Jasmine starring Cate Blanchett, which isn't even out in the UK for another six weeks or so. As far as poetting was concerned I began recording another AUTUMNAL E.P. poem, THE BALLAD OF TINY ELVIS, although only the first 12 lines - with the rest to follow. After a little snooze I went out for burgers and later met a dog called Gris and a guinea pig called Burt! It's a long story but their owners, Caitlin and Matt commissioned me to write a poem about them which you will find at the end of this post. 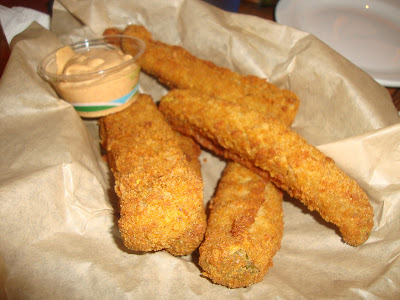 Today I didn't record any poems, but I did eat chinese and get some interesting views from the cable car up to OHSU (Oregon Health & Science University). I also wrote the poem that I mentioned (see end of post) and which is entitled THE BALLAD OF BURT AND GRIS. It's been a long time since I wrote one a "ballad" and unlike some of the earlier ones this pieces actually comes with verses and choruses. It is pretty daft... Naturally! 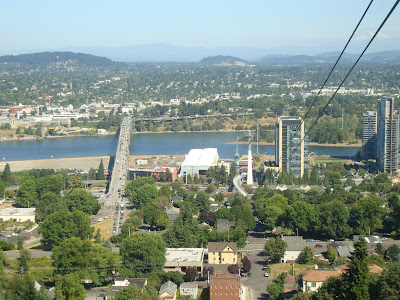 Today I started local by filming in Laurelhurst Park which is not too far from the flat. I finished recording TINY ELVIS, did a couple of mini-sketches, a yeti dance and also recorded my poem ALL THE RAGE which I couldn't remember whether I'd filmed recently or not! Never mind - at worst I'll have two versions! The rest of the day I just took shots of the food and the scenery - including my lunch, a Reuben in Northwest 23rd at Kornblatt's. I also worked on a couple of poems, SASSY MISS SASQUATCH and SANDY FROM THE FUTURE, the latter being inspired by something said by a lady named Ursula, who I met over dinner that evening. 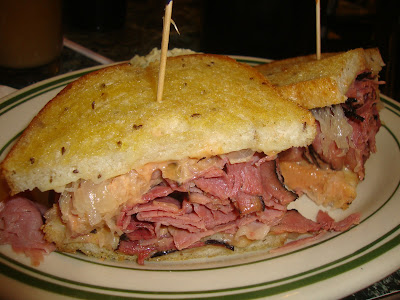 Today was mainly a footage gathering day, again. I kept on working on some new poems, but also visited the zoo. I had hoped to read a poem up there called ANIMAL CRUELTY - also from THE AUTUMNAL E.P. - whilst there, but didn't get the chance. Still, some of the animal shots that I accrued will be of use for that piece. In the evening I met some other animals over dinner and again some of the photos that I took might work with that piece too. 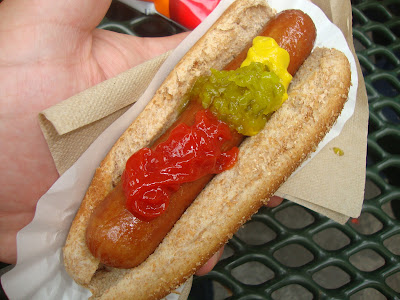 The hightlight of today was a trip to the Oregon coast - specifically Manzanita and Cannon Beach. During the trip up there I began a new poem called WANNA LIVE IN GOOSE HOLLOW which is a district of Portland and I also finished my poem SANDY FROM THE FUTURE, which had originally been set in the city, but I decided to sacrifice the lines that mentioned Portland for the GOOSE HOLLOW piece. Down on Manzanita beach I recorded a version of my poem ANIMAL CRUELTY; the weather was overcast, but pleasantly cool and many photos were taken and good food eaten during the trip. 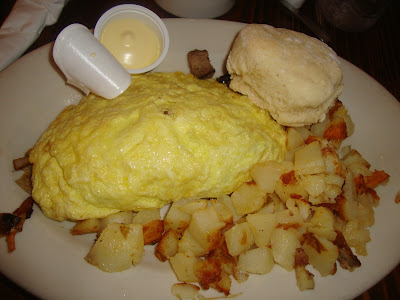 Today was the last day of the trip and I finished my CEDRIC THE CEREAL KILLER poem and re-read ANIMAL CRUELTY for sound purposes before getting ready to head home. There was still time for shopping and some more good food! 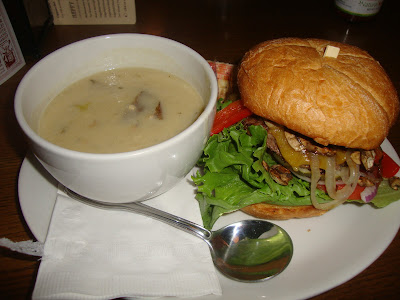 Today, it was time to travel home - with plenty of photos and enough footage for, at least, one new episode of SHY YETI ON LOCATION. It's one that I'll hopefully work on pretty soon too. All that was filmed today was the odd photo of food or shots from the plane. I also finished the poem SASSY MISS SASQUATCH at Calgary airport and arrived back in the UK on the August Bank Holiday Monday. 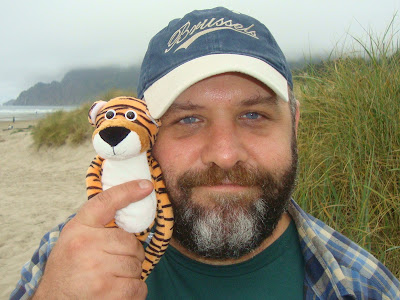 I hope you enjoyed the diary. There will be more photos to come and maybe not all of them will involve yummy stuff, although that is definitely preferable to my ugly mug! Thanks to Dominic for helping with some of the filming, to Daria for driving us around on some days and to Caitlin, Matt, Whitney and Ursula for their inspiration during the week.

POEMS RECORDED IN THE PORTLAND AREA
From THE AUTUMNAL E.P.

Films watched on flights there and back: Stoker, The Guilt Trip, Side Effects, Annie Hall, The Hangover - Pt 3, also 30 Rock episodes etc.

Before I head off I intend to share with you that poem that I promised! As I may have mentioned, it's all about a friendship between a large dog and a guinea pig! I'll say no more - you should probably just read it... Or not! Next week it'll be time to be getting ready for another Poetry Café Show with John Smallshaw on Friday 13th September. As it's Friday 13th I'm intending to read a selection of scary stories and poems - some new pieces and a number from my 10th anniversary edition of THE AUTUMNAL E.P., which will also be released next week. As well as John we also have another special guest on the night - but you'll have to turn up to see who that might be! I may give further hints next week, along with some more photos from the Portland trip! 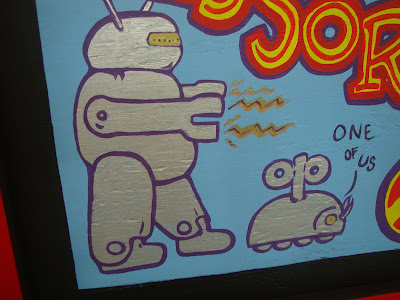 THE BALLAD OF BURT AND GRIS

Griswold is a dog -
Of quite a monumental size!
His massive paws far more like hooves!
Just see his mighty tree trunk thighs!
One bone a day is not enough -
Needs maybe five, needs maybe ten!
You'll hear him bark way back in London;
When he is home in Oregon.
He's a hound made all of muscle -
You could not ever call him bony!
Smaller than an elephant -
Yet bigger than a Shetland Pony...

Griswold the pony dog -
With his chum, Burt, the guinea pig!
He's twice the size of you or I!
Though his pal Burt's not quite that big!

Burtie - he's a pig;
A small one, really oh-so mini.
Although he's from the U.S.A.,
His folks are living back in Guinea.
He's not as tiny as a flea -
But he is small compared to Gris.
Just like a shaken can of pop -
There is no doubt he's full of fizz!
Likes eating carrots every day...
Well, they don't cost a lot of money!
They give his squeak all the mystique;
Of your State's greatest cartoon bunny!

Burt the guinea-pig -
With his friend, Gris, the pony dog!
Hey! Did you ever hear them howl?
They'll leave you pretty much agog!

Burt and Gris are just like brothers.
Yes, they do everything together!
Roller-skating dressed as cats -
As long as it's not icy weather!
They like to surf when tide is up -
Or when the waves are nice and perky!
They love to dance the dozy doe -
With their best bud, the Christmas turkey!
Every day's fantastic fun -
For Burt and Gris and that's no lie!
Those two are never seen apart...
Or else the fur would really fly!

Guinea pigs and pony dogs -
True comrades; the best of all!
Here's to the gang, Burtie and Gris!
Firm friends who'll never EVER fall! 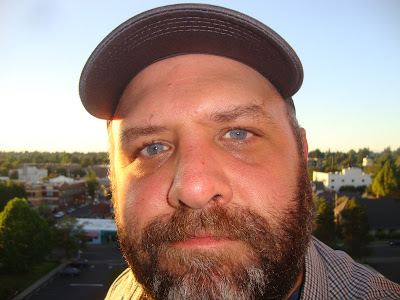 THE BALLAD OF BURT AND GRIS will appear in my first collection of 2014. This post is Copyright Paul Chandler 2013.
Posted by Paul Chandler at Wednesday, September 04, 2013