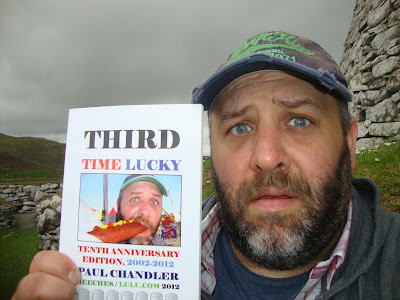 This week I'm posting some (rather delayed!) photos and thoughts about my recent trip to The Shetlands. Alas, due to being unwell, it wasn't quite the trip that I was hoping it would be - but I did manage to film a whole episode up there. That may not sound a lot, but considering how unwell I thought - believe me - I'm amazed I did as much as that! I was off work for over a week, but I'm only really covering the Monday to Friday 3rd to 7th June... 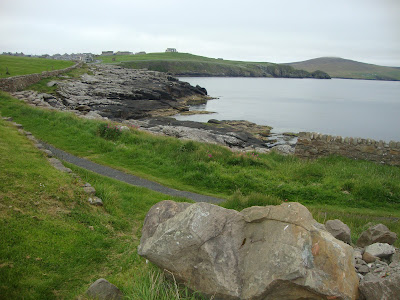 This was the day we flew out to the Shetland Isles via Aberdeen. I didn't take any photos that day, partly because I wasn't feeling well. I still managed a good dinner in the evening at our hotel. My appetite is hard to defeat! *waves French stick bravely in the air* 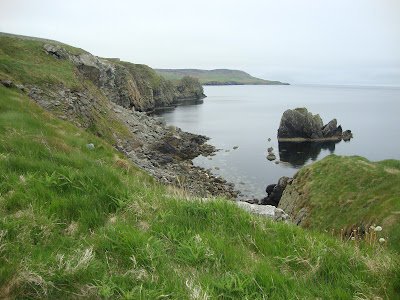 Today we spent the morning exploring the coastline near the hotel in Lerwick and then in the afternoon travelled out to a number of locations near the airport; taking only a few photos due to feeling unwell. I filmed a poem in the morning, THE TRUTH ABOUT HAGGIS, which is from my first collection, JUNK/FOOD. 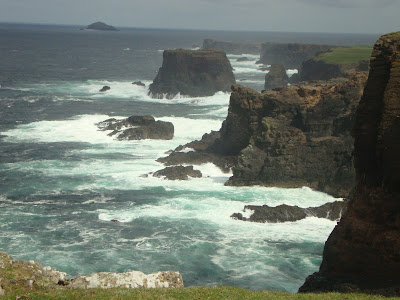 On Wednesday we drove out to the coastline farther across the island. I still wasn't well but managed to film versions of my poems  YOUR FORTUNE TOLD and REINCARNATION from my 2nd and 3rd books. 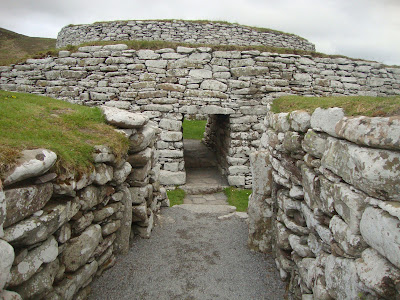 No matter how bad I felt, I was determined to conclude filming the Shetland episode. Luckily enough our hotel was close to an ancient stone whatnot... The poem was THEY CAME FROM THE OUTER HEBRIDES from my 4th collection, GO 4TH AND DIVIDE... 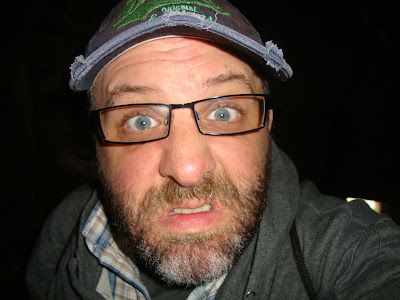 Today, we left Shetland - no real filming today except for some footage from the plane. Thanks to Elizabeth and Brian for driving us about and enabling me to get some nice shots around the island.

There will be a few more photos from the trip soon, probably just before I head up to the Lakes... I'm still editing on the Lake District episodes from last summer - they may take a while to complete yet... I'm also still working at completing my next collection of poems and stories, NOT AS SHY AS I WAS, which is due out in November. Before that, however, I am pleased to announce that the 10th anniversary edition of THE AUTUMNAL E.P. is ready to be released in time for my Poetry Cafe show on Friday 13th September 2013. The 10th anniversary of GO 4TH AND DIVIDE was also released recently - details as follows:

GO 4TH AND DIVIDE, published in mid-2003, was Paul’s fourth self-published collection and his third to include completely contemporary compositions. Long before he became Shy Yeti he was just plain Paul Chandler; what hasn’t changed is that he always wrote daft verse! Until now GO 4TH AND DIVIDE has only been available alongside its sister volume THIRD TIMES LUCKY (re-issued in 2012) so this is the first time that it has stood alone. This is a special 10th anniversary edition containing photos and behind-the-scenes information about the book. This volume includes many poems that Paul still performs today, AS OLD AS YOU FEEL, DAREDEVIL, DARK HORSE, EXIT PURSUED BY A YETI, FURRY FROM THE DEEP, KILLING TIME, REVOLUTION ON THE 8.15 and ROSY-TINTED LIFE, but also includes many that he’s never publically performed!

Talking about Poetry Cafe shows, we have another show this very Friday to look forward to, so next week we'll be discussing that! If you want to come along it's this Friday (19th) at The Poetry Cafe near Covent Garden, London from 19.30 until about 21.30. There will be open-mike slots if people want to come and read...

PS Here's another post from Adam M Botsford  - the first link is his illustration for a poem of mine called THE WORLD IS FULL OF BULLIES, from my NOT AS SHY AS I WAS collection, which is due out in November: http://adambotsford.com/post/51051588503/bullying-image-final-done-ya-im-much-happier The second illustration is for another poem from the same collection - YOUR CAKE-ADDLED MIND: http://adammbotsford.tumblr.com/post/54034619855/commission-complete-this-is-a-really-fun-piece 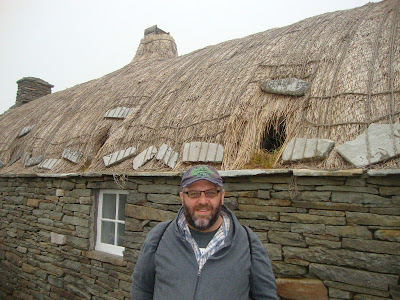