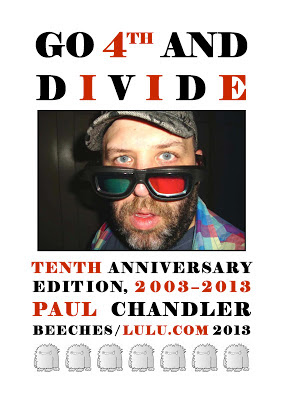 First up this week I have two bits of good news - we've passed the 25,000 hits mark on the MRSHYYETI Youtube account, not to mention that we're also almost up to 12,500 hits on the blog. So thanks for reading the waffle that I write and watching the films that I post, if you've ever done either... Which, if you're reading this then I guess you must have!

Anyway, this week we're going for a bit of a journey - back into the past, almost ten years back in fact!

Yes, I'm happy to announce that the new 10th anniversary edition of GO 4TH AND DIVIDE, my 4th collection, is due to be re-issued next week. Although I made mention of the collection around the time that it was published back in 2003 and also posted one or two poems from the book, I never really gave any of these early collections the fanfare that they deserved when first they were published.

This is how the release of the original edition was trumpeted....

The original edition was released on the 21st July 2003, but as 21st July 2013 is about three days after my next Poetry Café show it makes sense to release it a little earlier as it's ready now.

So, having said that, the 10th anniversary edition of GO 4TH AND DIVIDE will be officially re-released on the 31st May 2013 and I hope to post something from the collection around that time too.

As a reminder, here are the poems that are included in GO 4TH... Some you may know, some I still perform in videos and at shows and some I'd almost completely forgotten about myself! Actually, some of that latter category I'm quite excited about being able to perform in the future. There's only really one or two that make me slightly cringe or blush - not bad after 10 years, I guess. Anyway... Here are the titles that are included in this volume - some of them I've been performing again and some I've recorded for recent SHY YETI ON LOCATION episodes.

PROLOGUE (A STORY, PART 1)
AAAAHH! THIS’LL BE THE FIRST POEM…
ANYTHING FOR HER ART!
AS OLD AS YOU FEEL…
BLACK AND WHITE COWS
BREAKAGES MUST BE PAID FOR
BRICKS, TRICKS AND ANTHILLS
BULL IN A CHINA SHOP
CONVERSATIONS OVERHEARD
DAREDEVIL
DARK HORSE
DATING SEASON
DECORATING MORRISSEY
DID YOU KEEP THE RECEIPT?
DRUNK
EARTH IS ROUND… (YEAH, RIGHT!)
EVOLVING…
EXCUSE ME… BUT ARE YOU THE LOVE OF MY LIFE?
EXIT, PURSUED BY A YETI
FAREWELL TO SLOUGH
FROM THE MIND OF A TURNIP
FURRY FROM THE DEEP!!!
GAP IN THE MARKET
GETTING ON FAMOUSLY
GOT IT ALL!!
GREAT MAN
HARD TO GET!!
HE SANG…
HOW LONG HAVE YOU TWO BEEN TOGETHER?
HUNT THE TATTOO
I AM NOT A GOOD ENEMY TO MAKE!
I CANNOT HOPE TO COMPARE!
I DON’T GET ON WELL WITH INANIMATE OBJECTS…
IF YOU LOVED ME YOU WOULDN’T…
I’LL NEVER TELL…
IT’S NOT NECESSARY TO PANIC!
JUST AN EVERYDAY WEREWOLF
JUST ONE OF THOSE THINGS
KILLING TIME
LOVE AND AMNESIA
MARSHMALLOW HEART II
MEANWHILE ELSEWHERE
MR. POPULAR CULTURE
MY LAST LOVE (UNTIL THE NEXT ONE)
NIGEL THE LONELY STAG
NOT THE GUY YOU THOUGHT I WAS!
ONE HUNDRED SECOND CHANCES
PIGEON-HOLED
REVOLUTION ON THE 8.15
THE ROCK POOL
ROSY-TINTED LIFE
RUNNING DOWN CORRIDORS
SHE TAKES OFF HER RINGS
SHE WORKS HER FINGERS TO THE BONE
SOMETHING OLD, SOMETHING NEW!
SOMETIMES I TALK TO COLD CALLERS
SOON ON YOUR WAY: STRIKES BACK?
STALKER
TEMPER! TEMPER!
TEN DAYS…
THAT JOKE JUST WASN’T FUNNY
THERE ARE NO DISCOTHEQUES IN THE STARS
THEY CAME FROM OUTER HEBRIDES
THEY’RE SO RICH
WE HAVE MICE
WHAT WOULD THE WORLD DO WITHOUT ME!?!
WOULD AUDREY HEPBURN DO IT?
WOULD YOU DENY US?
YOU AND WHOSE ARMY?
EPILOGUE (A STORY, PART 2)
ABOUT THE POEMS
LAST POEM: NOT A HAPPY BUNNY

Later in the year I'll also be celebrating the 10th anniversary of my 5th collection, THE AUTUMNAL E.P. - which, strictly speaking was released in December 2003. I had considered re-issuing the 10th anniversary edition in November in time for me to read from it during my November 2013 Poetry Cafe show and also during any holidays that I take for my 40th birthday the same month. My original plan was to release my next new collection, NOT AS SHY AS I WAS in September in time for my September 13th Poetry Cafe show - but I'm now thinking that I might swap those dates around as, even though it's a little early to release it in September, THE AUTUMNAL E.P. is closer to completion than NOT AS SHY AS I WAS... Oh, how complicated!!

In other news I'm working on the final script (of 8) of BEAST OF FRIENDS - Series 2, am also still adding new material to my "2014" collection and have also started working on the 10th anniversary edition of LOVESONGS FOR THE BITTER AND TWISTED, due out during 2014.

Before I bid you farewell this week I'm going to share with you a piece from my most recent collection, ARE WE THERE, YETI? The story that I've included is called THE WEDDING PLANNER, I hope you enjoy it!

You can still get hold of copies of ARE WE THERE, YETI? Here's the information of what it's all about, where to get it and what it costs...

Thanks to everybody who has already bought their copies of the book! Your support is very much appreciated, as are all the kind words of encouragement that I've received since it was published.

Next week, we'll be looking forward to another SHY YETI ON LOCATION episode, not to mention my forthcoming trip to the Shetland Isles at the start of June.

PS This week I've finished a new poem called HANGING OUT IN GRAVEYARDS WITH MY SWEETHEART... It's a bit of a quirky, bitter/sweet, silly, horrible and slightly reflective piece. It's basically about watching ghouls in a graveyard with somebody you care for and realising that perhaps you'll never be able to leave.


Phil was mortified. He hadn’t known how to explain himself. He’d well and truly mucked up in his role of wedding planner for two of his oldest University friends, Josie and Stuart. It was only two days until the wedding and not knowing what to do – he had approached Josie to tell her his problem; he daren’t even admit it to Stuart for fear of how he would react. Would Josie be any more understanding?

“What happened?” Josie sighed, trying to keep calm. “You forgot to arrange food for the veggie guests?” Phil shook his head. “The flowers weren’t ordered?”

“You’ve never forgotten to hire the string quartet for the reception?”

“No, Josie... It’s way worse than that, I’m afraid!” Phil took a deep breath before explaining. “Somewhere along the way, what with all the forms we’ve filled in... Well, I just found out that rather than it being you and Stuart – the registry office actually thinks that you’re marrying ME!”

“Oh!” exclaimed Josie. Phil cringed, bracing himself for her fury, close to tears. “Oh! Oh well...” Josie added and then she smiled. “Never mind, aye? We don’t have to tell Stuart, do we? After all, I always did think that you had the nicer eyes!” 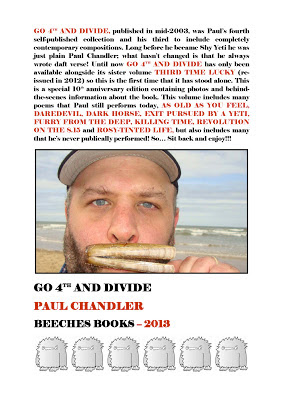 THE WEDDING PLANNER appears in ARE WE THERE, YETI!? by Paul Chandler - which was published in Spring 2013. This post and all content is Copyright Paul Chandler 2013.