MORE OF WHAT I GOT UP TO OVER EASTER... 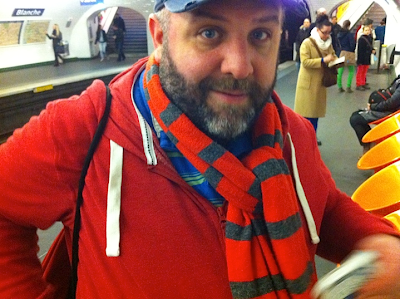 BONJOUR... JUST BACK FROM PARIS!!

Well! My holidays are all over now - but I still have things to report from the Paris trip! Not only that, but there's a new SHY YETI ON LOCATION video too - so we'll begin with that!

AN EPISODE WITHOUT A THEME has just burst out of the Yeti Archives and contains a number of pieces that have never appeared online before - a couple of them from the next collection, NOT AS SHY AS I WAS... Poems include: WHAT'S YOUR PROBLEM?. BEE-SOTTED and I'M A JELLY FISH... There is also plenty of daftness and a yeti dance! This episode was filmed in Surrey, during July 2012 and features a guest appearance by Mr Dominic McCauley. Camera: Paul Chandler and Dominic McCauley. Editing: Paul Chandler. Music: Luca and Spooky Yeti. This film and all contents are Copyright Paul Chandler 2013.

There is also a sequel to this episode, filmed in back in September 2012, but I'll be saving that for a while before releasing it - probably sometime during the Summer.

I am also glad to be able to announce that the first episode of our new two part Venice series is now completed and will probably be released in a couple of weeks time. That said, from the look of our ratings recently there are quite a few videos that people still have to catch up with - so I won't hurry. As it is, I'm currently working on the 2nd episode of this two-part series and have had a bit of a change of heart about what I am going to include and leave out of the final edit. Originally I had intended A YETI IN VENICE to be a sort of giallo / slasher film serial and had begun to reveal a few mysterious truths about "Shy Yeti's manager..." However, when I was out in Venice the episodes didn't quite come together as I had imagined them, so I may play the long game with the "manager" character in the show - especially since I got the thumbs up about the casting of said character. One of my former SUTTON PARK cast members has agreed to play him! More on that when it happens. The long and the short of it is that I did film a few rather bizarre scenes in Venice which were meant as "flashbacks" or visions and sort of replaced the slasher element of the episodes - but I'm not really sure they worked, so probably won't appear in any great detail during the finished edit; although you will hear at least once from the "manager". Anyway, more on future videos at the end of the post...

Now, as promised I'll update you on how I got on whilst filming in Paris with my trusty partner-in-crime, Mr Toby Warburton. Toby has helped direct a number of segments during more recent SHY YETI ON LOCATION episodes, most recently the poem TWO VAMPIRE HUNTING YETI which appeared during my recent A YETI BACK IN DORSET episode. 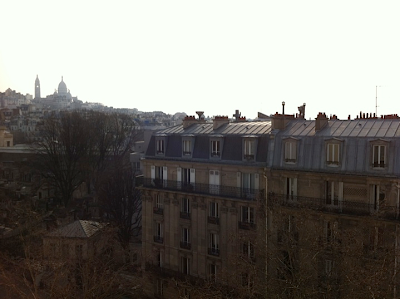 In the end I didn't do any filming at all today, I spent the day in London with Calum - but only took photos and had a very good lunch in Hoxton Square at an American diner called The Red Dog Saloon, which I highly recommend. In the late afternoon I met up with Toby and we travelled to Paris on the 6.30 train - but we didn't arrive until after ten, so no filming that day. One thing I did forget to mention was that when Calum and I were travelling to Hatfield Forest on Thursday I wrote a new short story called A HARMLESS PRANK, which I'm pretty pleased with and which I may well post online relatively soon. 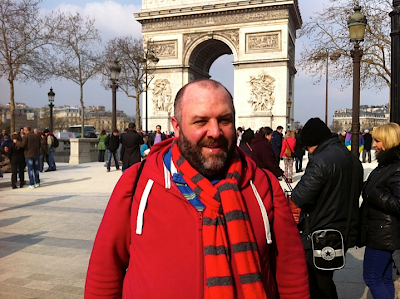 Today, Toby and I visited a number of Parisian locations, The Eiffel Tower, Arc de Triumphe, Louvre etc and I began filming the first two verses of an old poem called HE WAS JUST AN EVERYDAY WEREWOLF. At this stage I had already decided that I probably wasn't going to be filming a complete episode in the city on this occasion. In the late afternoon, whilst Toby took a nap, I visited Monmartre Cemetary, which was very close to the hotel - and completed the poem in that area. 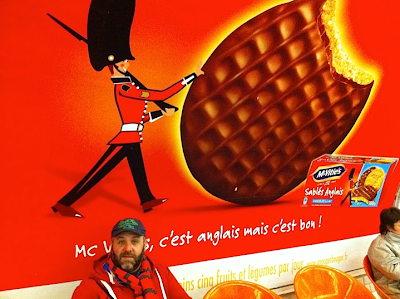 Today, I mostly just filmed footage for the episode around the Sacre Coeur and also near both Monmatre and Pere Lachaise cemetaries. The weather was lot brighter, but I was loaded down with bags - but it was definitely a successful trip all in all.

I have decided to include the Paris footage during an, as yet-untitled and unfilmed yeti film - as a bit of a surprise; in the same way as I used footage of my 2010 trip to Venice.

Now, to finish with I'm going to be concluding with a schedule of roughly when I hope to be putting further SHY YETI ON LOCATION episodes out up until the end of the summer...

SHETLAND EPISODE
AN EPISODE WITHOUT A THEME 2

Next week, we'll be looking forward to the next Poetry Cafe show and I may have a new poem or prose piece to share with you all...

PS Thanks again to Toby for letting me use his Paris photos - there will be more when I decide which episode the Paris footage will be going into! 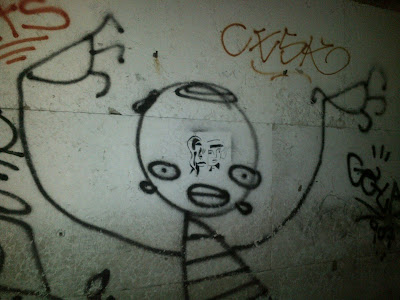 All photos, except for the last, are copyright Toby Warburton, 2013. All other content of this post are Copyright Paul Chandler 2013.
Posted by Paul Chandler at Wednesday, April 10, 2013