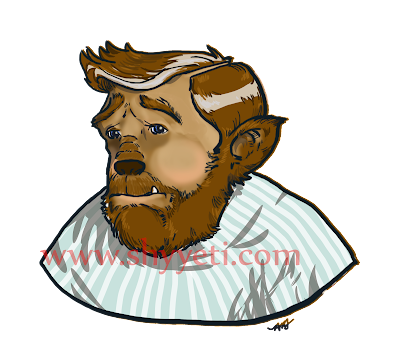 Don't be afraid of the fellow in our drawing; that's just the illustration that Adam M Botsford (from: http://adammbotsford.blogspot.co.uk/) has drawn to go with my poem SHAVING WEREWOLVES from my forthcoming NOT AS SHY AS I WAS collection. He won't hurt you... He's about to have his hair cut! The werewolf, I mean - not Adam. Adam's nice too and I'm pretty sure that he wouldn't hurt you either, but that's beside the point!

But that's fine - there's never been any rush!

So what are we going to discuss this week?

Well, having launched a new book a couple of weeks ago:

Not to mention launching a new episode and passing our 20,000th hit on the MRSHYYETI Youtube profile last week...

This week I'm afraid all I have to offer for this anniversary post is some news and a new and as-yet-unpublished poem about a pig called Augustus. Oh, and maybe a little bit of nostalgia too as we look back at a few of the daft ditties that I have posted at this time of year over the last 250 posts.

So anyway, what's this news, you may ask?

Well, the first piece involves which SHY YETI ON LOCATION video I'm working on editing next, having finished the A YETI BACK IN DORSET video last week...

Originally I had thought about moving on to the Venice episodes that I filmed back in November 2012, but instead I have decided to work on those as the weather improves - releasing some sunny episodes as it begins to get more springy and sunny here in the UK seems like a good idea to me.

Instead I've started work on the two part special that was filmed in Brussels and Ghent during early October 2012. The trip was a bit of a mixture of rainy and sunny - so I will do my best to mix it around a bit so one episode doesn't appear completely drenched whilst the other remains crispy dry! I'm doing pretty well with the first episode and so I'm pretty confident that it'll be posted sometimes early in March.

Following the release of this two part series, here is a provisional release schedule of episodes that will follow it:

Of course there is also the snowy summer episode that I have already begun filming and any other new episodes that I film once the holiday season begins. I'm not entirely sure what I'll be up to during my Easter holiday or where I'll be spending all three weeks of my summer holiday - although I may or may not have mentioned that I'll be returning to the Lake District again at the start of August. This still leaves a trip somewhere in early October and potentially a couple of others in November as part of my 40th birthday holiday. I'm also hoping to go back to Dorset or somewhere similar at New Year... Ahem! Yes... I know! I plan FAR too far ahead... And yes, I DO already have ideas for where I want to go for my holidays in 2014 too...

Anyway, whilst I theorise over a number of potential trips that I'd like to make there is actually one location that I am now pretty much sure that I will be heading to; a holiday that I haven't mentioned to you yet...

It is my flatmate Calum's 40th birthday on the 31st May and, as of last week, we booked a trip to celebrate that which will be taking place over the first week of June... The location's a rather interesting and obscure one - not to mention a potentially scenic and interesting one - but goodness knows what the weather will be like...

So where are we going for that week?

The answer? The Shetland Islands...

As I say, I'm not sure how breezy or rainy it might be up there - or, for that matter, how many episodes I will manage to put together; although at worst I can always record the poems inland or indoors or dub the sound over some pretty views! We'll see... It should be an interesting trip, at any rate! 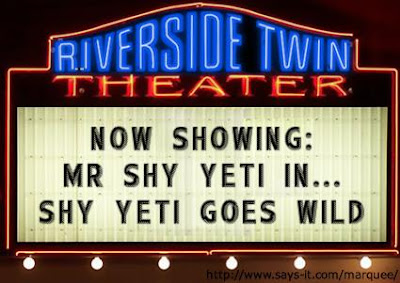 I thought I'd end this post by looking back at what I was sharing with you in a scattering of posts over the last 11 or so years and across the 250 posts that have gone up in that time... It is only over the last eighteen months that I have made a concerted effort to blog every week - so these are just a few choice cuts from posts that contain a poem or something particularly of note; in some years there are no posts for late February / early March.

Here's a look back to what I was posting almost exactly ten years to the day on this blog...

At around the same time the following year I posted a poem called CRASHING BORES which is from my LOVESONGS collection, which is due the 10th anniversary treatment next year...

Whilst four years later in 2009 I was considering the statement, IF POEMS WERE PIES...

...and was also just about to do my first solo Poetry Cafe show...

Whilst around this time in 2010 I posted a new poem about a CUPCAKE...

and then the following week shared a rather daft prose piece about animal rights...

Moving on now, before I sign off I'd like to tell you a bit about the new poem that I'm about to post and what exactly inspired me into writing it. Obviously, at first glance it's a pretty silly piece - and yes, it is a pretty silly piece, you're not wrong... But it was a particular piece of grafitti in Venice that inspired it - in fact it's the photo that appears just above the actual poem, below...

The poem is called AUGUSTUS THE TRUSTY GUIDANCE PIG... which probably comes from the fact that I took the picture when Dominic and I were getting lost around the Venice streets late in the afternoon in November 2012, during my most recent trip to the city.

Next week I'm going to be looking ahead to what is going to be happening over the next couple of months, including the first of 4 visits to The Poetry Cafe in 2013, some new Yeti videos and hopefully a number of location trips...

That's all for now - more soon!

PS I also finished two or three new poems in the last week - the titles are YOUR NIGHTMARES (formerly THE GIRL OF YOUR NIGHTMARES), INFAMY AND CURRANT BUNS and IT ONLY TAKES A MOUSE TO SNEEZE, all of which have been titles that I've been slowly working on since last year.

PPS I should also mention that just this weekend I filmed a version of the following poem, which I hope to include in my wintery summer special - due out, most probably, in July. 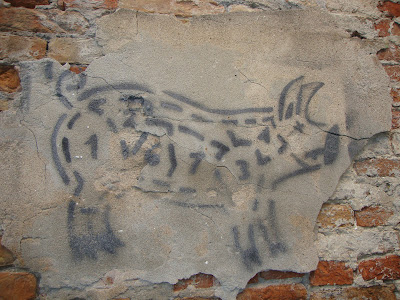 Augustus the trusty guidance pig -
He is quite the tourist's dream!
No matter quite how lost you get;
He makes things closer than they seem!
He is a navigatory expert,
He's got your future neatly mapped!
His oink is really kind of cheeky -
Yet seems it never gets him slapped!
Raised on ordnance survey maps;
Each day he studies a selection!
He keeps an atlas in his bed -
It's why he's got such good direction!


Augustus the trusty guidance pig -
He is the saviour of the lost!
Of all those who took a wrong turn;
All those who simply never flossed!
He is a fine and learned scholar -
He will ensure you're path is laid!
That you will know which way to go -
When no directions are displayed!
He's always off on some adventure;
He's not the tired nor lazy sort!
In the dark, can find his way -
Around the tube with just a snort!


Augustus the trusty guidance pig -
He is the hero of the hour!
He has the training of a tour guide -
The city streets are in his power!
He is a champion of the needy;
He'll set you on your merry way!
In the detail he's unbeatable;
An aid for when you've gone astray!
Always first to find the way out -
Of the longest, hardest maze!
He always knows which way to turn -
Augustus, you we duly praise! 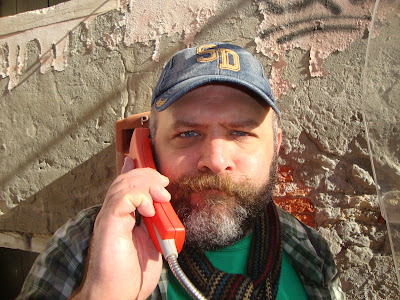