NOW IT'S TIME TO TELL YOU ABOUT... 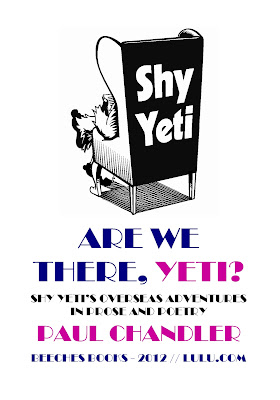 NOT AS SHY AS I WAS!

A new book? What, you say, already? Didn't ARE WE THERE, YETI? only come out last week?

ARE WE THERE, YETI? contains over 100 pieces, mostly short stories, a few sketches and a dozen or so poems. Some of them are funny, some sad, some quirky, some plain creepy. They are stories that Paul Chandler (a.k.a. Shy Yeti) wrote between July and December 2011; much of it during his summer and autumn trips to the States. Poems include: GLUE TO MEND A BROKEN HEART, NEVER TRUST A SKINNY FISH AND CHIP MAN, INVITE A YETI ROUND FOR TEA, IS IT CHRISTMAS ALREADY!?, JOHN – I’M ONLY RHYMING, MY LONG LOST FRIEND and the title verse. Stories include: THE CREEPY SHOW, A CUP OF SUGAR, RATTLESNAKES, SANTA’S BIT ON THE SIDE and A YETI HISTORY LESSON OF HOLLYWOOD.

Just so you know, the cover that appears at the top of the page isn't the finished cover, but an earlier version that I had considered when the book was originally due to be released back in autumn 2012. In the end I decided I wanted more colour photographs of me pulling daft faces - photos that appeared in the book and had been taken in the States where a lot of the poems and prose had been written too. The awesome cover artwork that appears on this earlier version by Pete K has appeared on a number of my other projects and is a regular title picture used during the end credits of many of my SHY YETI ON LOCATION episodes over the last few months.

I'll probably still post a couple more bits and pieces from the book nearer the time of the Poetry Cafe show to celebrate it in April. However I would like to begin telling you a bit more about the next collection now, which is nowhere near ready to be published, but is all written and will hopefully be available by the autumn...

Before we move on to the next collection I have a couple of other nice announcements...

On Wednesday 13th February 2013, our MRSHYYETI Youtube channel finally passed the 20,000 hits mark - needless to say I'm very pleased; this doesn't even include all the hits that we have on Vimeo too! We've already got another 300 + hits on top of that since reaching that landmark... To really take on board what an achievement for us this is let me just put it this way. Basically we have doubled our viewing figures in six months. We reached 10,000 hits back in August 2012 and it took two and a half years to reach that figure and only six short months to double it! Well, done viewing beasties - you've made me a very happy yeti fella, indeed. Keep watching and let's see how long it takes us to make 30,000 hits!!

Before I tell you about the next book I also have a new video to announce... 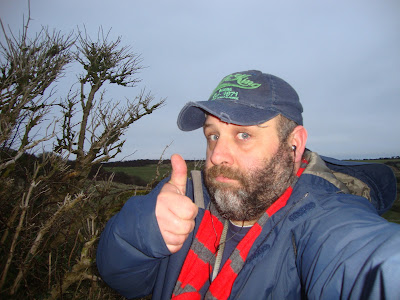 A YETI BACK IN DORSET was the last SHY YETI ON LOCATION video filmed in 2012 and the first to be filmed in 2013. In this episode Mr Yeti returns to the location of the very first SHY YETI ON LOCATION episode, that he posted back in January 2010. The episode includes 3 older poems, FROM THE MIND OF A TURNIP, DARK HORSE and A GAP IN THE MARKET from the forthcoming 10th anniversary edition of his fourth collection, GO 4TH AND DIVIDE - and one new (as yet unpublished piece) TWO VAMPIRE HUNTING YETI. The episode was mainly filmed on the Dorset coast near Swanage, with a couple of short interludes back in Surrey. There are more yeti dances in this episode than in any previous edition of SHY YETI ON LOCATION. Camera: Paul Chandler, Calum Williamson Harry Fulton, Paul Hillier and Toby Warburton. Editing: Paul Chandler. Music: Luca and Spooky Yeti. All Copyright on this episode belongs to Paul Chandler, 2013. There will be more Yeti episodes coming soon!

This new episode is also our 100TH on the MRSHYYETI Youtube page - there are a few more included on the SHYYETI Vimeo account, as this site was the original home of yeti videos, as established back in the Summer of 2008.

Anyway, now it's time to turn back to NOT AS SHY AS I WAS... All I intend to share on this occasion are the titles. The writing for the collection finished back in the autumn, but there is still a lot to be done before the book is published. Some of the titles you may recognise as a number of the pieces have been posted here on this blog during 2012 when they were new - a number of others have appeared (or will appear soon) in SHY YETI ON LOCATION episodes too! I'll discuss them all in detail closer to the time, of course - but here is the line-up in full. At least as it stands at the moment. There aren't as many as 100 pieces in this collection, but there are a fair number, with a mixture of poems, prose and stories; with a little more of an even balance on this occasion between each type.

Here are the titles:

ANOTHER YETI POEM
AUNTIE ASTRID GOES TO GERMANY...
AT THE STRIKE OF MIDNIGHT...
AUTUMN’S COMING
THE BALLAD OF DEAD-EYED BOB...
THE BEAST OF FRIENDS (A POEM)
BEE-SOTTED
THE BRIDGE
BRITISH SUMMERTIME IS HERE
COME FOR TEA
COMING UNRAVELLED
CRACKING THE CRACKLESS EGG
DANCING KEEPS YOU YOUNG
DIFFICULT SECOND ALBUM
A DOLL’S LIFE
DRUNK ELK
AN ELEPHANT IN THE ROOM
EVIL IVY
THE FALL-OUT SHELTER
FOR ALL TO SEE...
FROM WHERE I STAND...
GLAMOUR, AT ALL TIMES
GOTH’S DAY OFF
HELLO! HELLO! I’M HALLOWEEN...
A HUGE DECISION
I AM SICK (BUT DO I WANNA BE CURED?)
I’M A JELLY-FISH...
I CLEANED OUT MY DIRTY MIND...
IF I CAN’T HAVE A BULLDOG...
I LOST MY HEART TO A CORNISH PASTY (A SONG)
I THINK I USED TO BE A DOG
IT WAS ME...
JACK FROST’S CHILLI DIET
“JIIIIIIIIIIIM!?”
A JOB AT THE COUNCIL
THE LEAK
A LITTLE COMPANY
LOVES A GOOD CURRY
THE MAN-EATER OF SURREY GREEN
MANDATORY TRAINING
THE MELTING SNOWMAN
MINE OWN MINOTAUR (A SONG)
MISTER MOSQUITO
MIST YOU
MORE IS NOT ALWAYS MORE
MY BAGGAGE AND THE BEAST
NATIONAL TREASURE
A NICE HOT BATH
NOT AS SHY AS I WAS...
ON THE EDGE
PATIENCE IS THE KEY
QUEEN OF THE CHRISTMAS SEASON
SAMSON’S UNRULY STREAK
SHAVING WEREWOLVES
SHE’S OUR BOSS
SOMETHING’S UP WITH ROCKY LOBSTER
SPRITELY AND STATUESQUE
A TART IN PRUDE’S CLOTHING
TOUCHWOOD (A MONOLOGUE)
THE TRUTH ABOUT CAKE
A UNICORN AT BREAKFAST
VISION
A WAKE-UP CALL
THE WALKING SEQUIN
THE WEDDING BREAKFAST
WE’RE ALL JUST BRAINS...
WHAT LIES WITHIN...
WHEN TODAY’S MODERN ARTISTS ARE NO LONGER MODERN
WIGS AND CO...
THE WORLD’S BEST WORSTEST DANCER
THE WORLD IS FULL OF BULLIES
A YETI IN A HAT
A YOUNG HEAD ON OLD SHOULDERS
YOUR CAKE-ADDLED MIND
ZOMBIE FLICKS ARE THE NEW ROM-COM

As well as the usual photos, this collection also contains artwork by two - hopefully three illustrators. But more about that nearer the time of publication.

Next week we'll be celebrating our 250th post and I'll be sharing some photos from a recent filming session, not to mention posting a recently completed poem... I will also have news about which yeti series I'll be editing next and details about a new filming location for later in the year! But that's it for now - more soon!

P.S. Who could this person on the right be? Yes... It's me and my friend Nick Goodman when I was in the sixth year at Salisbury's Bishop Wordsworth's School - circa 1991. I'd better ask Nick, he would know exactly to the day, most probably! 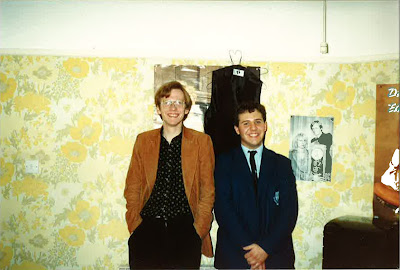