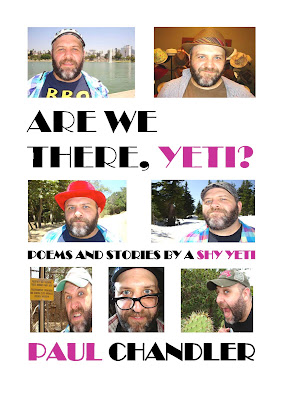 This week we have a whole load of nice things lined up for you; including giving you all the details that you need to know about the new book, ARE WE THERE, YETI? (including a piece from it!). I'll also be concluding my preview of the new collection by looking at all the poems included in the volume.

So, without further ado let me just say that I am proud to be able to announce the publication of my new collection, ARE WE THERE, YETI!? which has been over 18 months in the making... Here's some information about it!


ARE WE THERE, YETI? contains over 100 pieces, mostly short stories, a few sketches and a dozen or so poems. Some of them a funny, some sad, some quirky, some plain creepy. They are stories that Paul Chandler (a.k.a. Shy Yeti) wrote between July and December 2011; much of it during his summer and autumn trips to the States. Poems include: GLUE TO MEND A BROKEN HEART, NEVER TRUST A SKINNY FISH AND CHIP MAN, INVITE A YETI ROUND FOR TEA, IS IT CHRISTMAS ALREADY!?, JOHN – I’M ONLY RHYMING, MY LONG LOST FRIEND and the title verse. Stories include: THE CREEPY SHOW, A CUP OF SUGAR, RATTLESNAKES, SANTA’S BIT ON THE SIDE and A YETI HISTORY LESSON OF HOLLYWOOD.

This week we look at the poems from the collection; less than 20 of the 100 items in the new book are pieces of rhyming verse, the rest - as we've already discussed are either full length short stories or prose pieces which are somewhere between poetry and a short story.


ARE WE THERE, YETI?

The title track! Every Shy Yeti book needs at least one yeti piece in it... This collection has, at least, four - but that's beside the point! This one is about taking a ride with a yeti and it not exactly going well!

This originally intended to make its debut in this collection - but actually managed to sneak out and became the title-piece of a compilation of lost poems for lost loves. The "cactus heart" in this poem definitely sounds like a nasty piece of work!

GLUE TO MEND A BROKEN HEART

This is another poem that actually made its debut in the CACTUS HEART compilation that I released in the summer. It's quite a sad little piece and was written in a kind of verse/chorus fashion which could lend itself to a song, if the right tune came along.

INVITE A YETI ROUND FOR TEA...

Another yeti piece and one that I performed quite a bit during 2012, partly in shows - but also for one of my SHY YETI ON LOCATION episodes. This is basically about inviting a yeti around for tea, but very soon regretting that you did!

IS A TOADSTOOL A TOAD’S TOOL?

This piece was written as a play on words - a bit of a tongue twister. It does kind of make sense... Ish.

IS IT CHRISTMAS ALREADY?

One of my favourite poems from this collection - as it's a bit of a petty niggle of mine! I do hate that we start to hear about Christmas earlier and earlier each year. I don't really care for it anyway and I certainly don't want to be hearing about it in September or whenever! I recorded a version of this down in Broadstairs for one of my summer episodes.

Possibly my favourite piece from this collection - certainly my favourite of the poems. It's all a sort of reply to all the poetry snobs that I've met over the years who seem to look down on rhyming poetry and seem to think that their world view of poetry is the only view that matters. This is my call to do whatever the hell you want!

One of three love poems - this one about being a tad besotted with a minotaur...

KRAKEN YOU HEAR ME?

The second of three poems in a series - this one about falling in love with a Kraken; as you do.

CTHULHU, YOU ARE HOT!!

The third and final love poem about falling for a mythical beast; don't ask... It's just plain odd!

Another Christmas themed piece that I also included in

A silly little piece about "murdering" a song - taking the phrase literally!

Another of my favourites from this collection, parly because it's partly inspired by a true story! Sometimes when you meet old friends again you really wish you hadn't!

A more serious piece that was written in memory of a friend's mother who died in 2011. That said, I hope the piece works for anybody who finds themselves in that situation.

Another favourite from this collection - a completely daft one, but one that I enjoy reading aloud. I filmed it in August 2012 for one of my SHY YETI ON LOCATION episodes set down up in the Lake District, which is yet to be edited.

Another yeti piece - about an especially sweaty yeti. I also recorded this when I was down in Broadstairs during the summer.

TOO SHORT TO BE A YETI

This piece mentions yeti - but isn't really about them... I'm not convinced that I DO know what it's about for that matter!

YOU’RE NO FRIEND – LET’S BE ENEMIES!!

Another poem about friendship - or the decision to quit being friends and just start being enemies. Sometimes the line between the two can be very close.

YOUR NEW BOYFRIEND’S A MINGER

A nice catty piece which slags somebody off... They're not going to be pleased when they hear it!

So, here ends our preview to ARE WE THERE, YETI? I'm sharing another piece from the collection with you - a story called THE DAILY GRIND. I hope you enjoy it; it appears at the very end of the post.

Next week I'll be moving ahead to the next collection, NOT AS SHY AS I WAS, which I finished writing back in the autumn - and which I have begun to do some formatting and proofing work on. I'm hoping that it'll be ready by the autumn along with the 10th anniversary collections of GO 4TH AND DIVIDE and THE AUTUMNAL E.P. - but for now I'll just be sharing the titles with you. With a bit of luck the new SHY YETI ON LOCATION video will also be ready by next week - but I make no promises!

That's it for now - all except for a piece from the new book, which appears below! 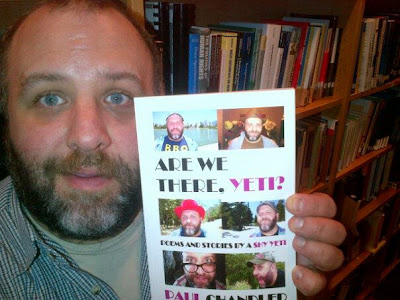 Jeff Murray worked in London. Everyday he commuted the 45 minutes into Waterloo; always at the same time and pretty much with all the same people.

It was odd, but over the ten years that Jeff had been doing that journey, none of his fellow travellers had ever engaged him in conversation; not that he had instigated any potential discussions of his own other than a daily insincere “Good morning!” to one or two familiar faces that he couldn’t avoid acknowledging. It was strange – for technically the majority of these people were his neighbours – but the whole lot of them might as well have been strangers for all the attention that they paid one another. It really was most peculiar when you considered it.

If he admitted it to himself Jeff realised that in a way he was almost afraid of those people that lived in the flats around him; genuinely fearful of interacting with them. The same went for those commuters on the platform. The general consensus seemed to be that you were somehow allowing strangers into your private world – strangers who might somehow try to harm you. It almost petrified Jeff now to even consider actually starting up any meaningful form of conversation with any of them.

It probably all appeared quite calm and convivial to any outsider who didn’t know the truth; but Jeff knew what these people were really like. He was always careful to stand at the far end of the platform, which only allowed people to stand on his right side just in case a quick escape was required. Just when they thought he wasn’t looking, he would turn and catch their true sneering expressions.

Mrs Smith was adjusting the deadly blade on her stiletto heel. Old Mr Richards was reloading the small pistol that he always carried in his briefcase. Meanwhile, Reverend Stanley glared at them one by one, fuelled by fury – bubbling with a madness that was bound to overflow at some stage. One day he would snap and shove somebody clean off the platform and into the path of a speeding train…

Not today perhaps, but soon…

“Well, it won’t be me he gets!” vowed Jeff under his breath, for he always came prepared – always carried his poisoned tipped umbrella clasped tightly to his breast. “I’m ready for you! All of you!” he snarled. “BRING IT ON!”

THE DAILY GRIND is one of 100 pieces just published in Paul Chandler / Shy Yeti's new book, ARE WE THERE, YETI? which is now available from www.lulu.com at £9.99 for the paperback and £15.99 for the hardback edition. Links to this book appear at the top of this post. 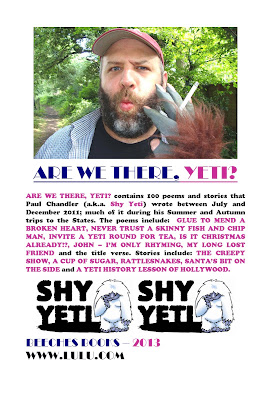