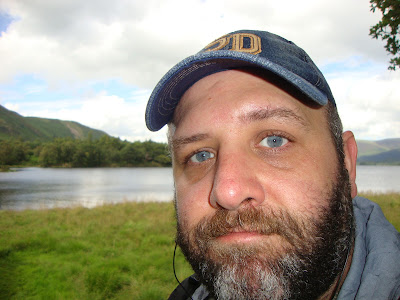 I'm going to talk about quite a number of subjects this week. First of all there is a new video!! It's a live one from the last Poetry Cafe Show and here's a little more about it...

This is a live video from Shy Yeti (a.k.a. Paul Chandler)'s show at The Poetry Cafe on Friday 16th November 2012. He reads a number of pieces, an extract of a new poem called ANOTHER YETI POEM and some older pieces from his THIRD TIME LUCKY collection which celebrates its 10th anniversary in 2012. The poems from this collection include: ANOTHER PATHETIC ASSASSINATION ATTEMPT, BALLAD OF A CHILD ACTOR, BETTER BY FAR and DOWNSTAIRS FROM UPSTAIRS. But Mr Yeti was not the only poet on hand during this show, there is also poetry from Mr John Smallshaw and Sally J Blackmore, reading from from her collection DEPLOYED. This video was filmed by Dominic McCauley and edited by Paul Chandler, music is by Luca. The copyright of this film remains with the performers, Paul Chandler, John Smallshaw and Sally J Blackmore, 2012. There will be more from this show during Spring 2013.

Please note that some of the footage is a little dark, but quite watchable. 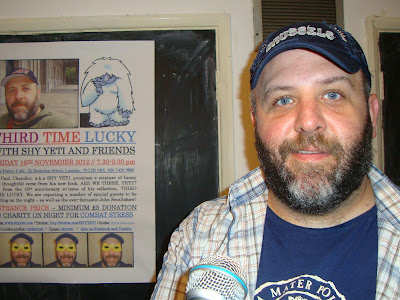 Moving on now - as I've not posted about them in a while, here's an update of the ratings for all the SHY YETI ON LOCATION videos up until Monday 10th December 2012.

Some of the films posted earlier in the year achieved very good ratings over the summer, in fact one of them is currently in the top 10 list of all time. We're still getting over 1500 hits a month, which is about three times as many as the profile was receiving this time last year! Needless to say I am very pleased! So thank you, thank you, thank you to all of you who watch the films and have also tweeted about them or shared the links. There are many more videos still in the can ready for next year.

So, this is the point where I ask which of the videos posted in 2012 was your favourite? If you're not sure which videos came out this year they are the ones marked in red above and here follows a bit more of a reminder...

The year began with me posting the finished videos of episodes that I'd filmed late in 2011 in Brugge and Lille and back in the States; not to mention films from the last live show of the year and a return to Radio Wey. By March we were getting onto those that I'd worked on in January and February which were among some of my favourite of the year; especially SHY YETI GOES BUSHY which was one of my most enjoyable filming experiences so far in the series and one of the first which Dominic and I filmed together after he moved over from L.A. By May I was beginning to put out videos from the first live shows of 2012, as well as my first overseas trips of the year and by the summer got a chance to edit BEWARE THE VAMPIRE COWS, one of two films left over from 2011. Around this time I also made a return to Radio Wey and also filmed my own Jubilee Two-part special! My only regret about 2012 is that I filmed a number of series from August onwards, that I did not have time to edit, including episodes from The Lakes District, Brussels and Venice - not to mention a number of other sequels to earlier episodes. However these are all safely archived and I'll get around to editing them in the Spring. Of the episodes filmed in the last third or so of the year, which I did edit, my episodes from Broadstairs and my two Halloween episodes came out in the autumn and allowed me to test a few different skills, song-writing in the case of the Folk Week episodes and cookery in the case of the first of the two spooky-themed installments.

Early in the New Year I'll reveal which of the following videos got the highest ratings, so if you have any particular favourites then you can influence the final result by watching it as much as possible over the next few weeks. Don't forget, we're less than 3500 hits away from 20,000 on the MRSHYYETI Youtube page - not that I'm expecting us to reach that anniversary before January 1st... Unless people are really keen! ;)

Here is the definitive list of episodes loaded onto Youtube and Vimeo during 2012, although please note: this does not include those migrated from VIMEO which were originally released in 2008, nor any new SUTTON PARK episodes; although all those SP episodes are still doing very well in the ratings, which is very pleasing... Anyway!

Last weekend I was putting the finishing touches to the Christmas episode and having edited the live video I'm going to move straight on to editing the Christmas show whilst I still have ten days or so to post it. This last piece of location filming took place around the Christmas trees at my work on Friday 7th December in London and then also up in Derbyshire in the town of Belper over the weekend. I had also expected to record footage in Lincoln at the Christmas Market; despite the market there wasn't a lot of visible Christmassyness that really fitted into the episode. No matter! I have plenty of footage to sift through and only until a week on Friday to edit and post it before I finish work!

Now, there is also news about ARE WE THERE, YETI!?

After much thought on the subject, I'm afraid you're going to have to wait until January now for this book to be released! WAIT! WAIT! Please... Stop your sobbing! There are good reasons for this! As much as I would have loved to be able to have published it in 2012, there is very little sense in releasing a new book the week before Christmas. I've released plenty of other books during 2012, so it really doesn't matter if this one is held back until the start of 2013, better to wait until the Christmas horrors have passed! I'll be focussing on this book during my first show of the new year, in April - so there really is no real rush.

I want to end this post on a fun note... B Flat, isn't exactly a ball but it'll have to do! Talking of which, I have to rush as I need to get busy creating some music for the Christmas video. The Halloween videos had music composed by SPOOKY YETI, so the Christmas band should be christened... BAUBLES YETI? TINSEL YETI? I'm not sure... Any suggestions, please DO let me know!

That's it for now... Next week I'll be sharing with you some photos from the forthcoming Christmas episode and maybe posting a Christmas themed piece; although not the one that I've written specifically for this Christmas. THAT will be up on Christmas Eve, most probably! 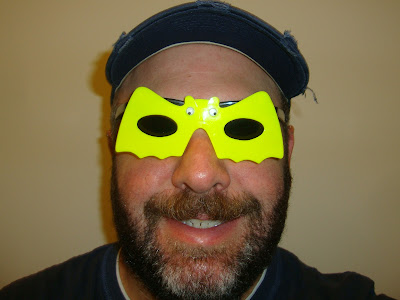