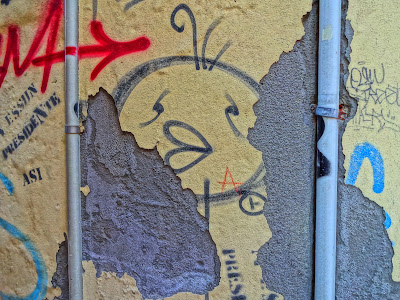 OUR FINAL FURRY FLOURISH FOR 2012

This week's post is basically me setting out  what I have in store for you between now and the end of the year... *looks through goody bag and hope that some or all of it appeals!*

With only just over a month to go until 2013 there is a lot that I'd like to get done, but I know that - realistically - I won't get it all done! Not unless somebody would like to pay me to edit my backlog of yeti videos!?! Nope, thought not...

Before I go on, what's with the photo above? It's pretty much all that's left of a bit of grafitti that I first spotted in Venice back in late 2006. It was a bird with very long legs and I have a photo of it somewhere when it was fully intact. So, I was a bit sad to see what was left of it - which isn't much! The same had happened to the cat that was on the cover of RHYMES BEARS STEAL PIES FOR, which is now long lost beneath posters; it could be seen back in 2010 when I was last in Venice - but was totally obscured two years later.

Here's how it used to look: http://www.lulu.com/shop/paul-chandler/rhymes-bears-steal-pies-for/paperback/product-6410295.html

What happened to the Halloween episode? Is it still going to be posted?

Indeed it is... It's pretty much done, although it probably won't be loaded up until the end of this week or early next, so the links will be in next week's post. There was a lot of footage that was potentially filmed for this episode that I decided had to go by the wayside because it was just going to make the episode far too long... There's about 4 poems in this episode as there is and quite a lot of yeti dancing and silliness - so some of it just had to go. Who knows I may be able to use it in the 2013 Halloween special, if there is one. Actually some of the footage in this new episode was actually filmed in a foggy wood in Camberley back in November 2011 long before I knew when I was going to use it. It was just one of those opportunities when you have the spooky setting and think "I've got to get some footage of this, even if I don't know when exactly I'm going to be able to use it!" The only other change about the new episode is that despite the references to Halloween (which it was originally filmed for) I am have retitled it from SHY YETI'S HALLOWEEN HOO-HAA to SHY YETI'S SPOOKYCREEPY SHOW. I just didn't have the time, what with going to Venice, to get it done closer to Halloween itself; but I didn't want to leave it on the shelf until Halloween 2013. At least I was able to post our Halloween cookery episode up exactly on the day as that was quicker to get completed; SPOOKYCREEPY SHOW had a lot of footage for me to choose from as I've already been going on about. Okay now... I'll stop... Let's move on.

What will you be editing after next week's new episode?

Time is running out for editing more films in 2012, so I'm going to have to focus on possibly just 3 more episodes before the end of the year; another Sutton Park instalment, a live video from the THIRD TIME LUCKY show and obviously the SHY YETI ON LOCATION Christmas episode - with the emphasis on that last film over the other two. It's bad enough that I'm so late with the second Halloween episode, but I'm not going to allow myself to dish up the Christmas episode in April! Talking of which...

How are we doing with the Christmas episode? What comes after that?

Very well, thank you - I was just filming footage for it on Sunday at the Winter Wonderland in Hyde Park, in fact I, as good as finished it today. I filmed a few comments, lots of Christmas images and also recorded the poem ALTERNATIVE SEASONS GREETINGS. I recorded a few more scenes on Monday 26th November - a silly piece about why I have problems with the festive season and that episode's yeti dance (decked in tinsel!) This makes that episode now pretty much complete; except for perhaps a bit more footage that I hope to film at a Christmas market in Lincoln in a week or two. Once this episode is filmed and edited I'm going to aim on focusing on another cooking episode that I filmed with Dan back in October. After that I have a whole heap of other episodes to edit - those filmed in the Lake District during the Summer, those filmed in Brussels in October, those we made in Venice earlier this month and one or two others that I filmed locally! Even if I don't film very much during the spring there are still loads more films that I have to edit and post!

What new poems /stories have I been working on?

I've been working on quite a lot of new poems on my Blackberry - some are just titles, some just a verse or so. I've been pretty busy finishing off some of my other projects, so I'm just writing new stuff as it comes to me, but I'm hoping to have a few more of them completed before the end of the year for inclusion in my GRANNY ATE MY AFTERBIRTH collection, which probably won't be out until late 2013. Here are some of the titles that I've been working on, the ones in bold are those that I've finished and the ones in italic ones I have only just begun...

ARE THEY AWARE I'M A WEREWOLF?
GRANNY ATE MY AFTERBIRTH
ON FIRST NAME TERMS WITH LOVE
THE BEAUTIFUL PEOPLE
THE MORNING AFTER HALLOWEEN
THE ONE

A SPIDER IN MY BATH
AUGUSTUS THE TRUSTY GUIDANCE PIG
BAD CATTITUDE
CAT ISLAND
DEAR CARMEL
DRINKING YOUR TEARS
ENOUGH OF YOUR SAUCE
GIBLET THE GORILLA-LA-LA-LA
HAPPY BIRTHDAY CAT-FACE
HIS CHRISTMAS CARDS
I WOULD MAKE YOU STAY
LAZY FIRE-EATER
MEERCATS
NO-ONE NEEDS YOU MORE THAN ME
NO-ONE TREATS NEW YORK LIKE THAT...
PICCADILLY IS A RUBBISH CIRCUS
SET IN STONE
SMITTEN FRIENDS
SO IN LOVE...
SPACIAL AWARENESS
STARS
THE DANCEFLOOR BEASTS
THE GIN GOBLINS
THE NAUGHTY 40S
THE SERENE REPUBLIC OF SLOTHDOM
THE SHARP END
THE SHRINKY IMPS
THROWING SALT
TWO VAMPIRE HUNTING YETI

Big thanks to Toby W for inspiring a number of the above titles, one of which he referred to directly in a text! That would be The Serene Republic Of Slothdom, as you asked so nicely...

What's happened to the ARE WE THERE, YETI!? collection? Will it be out soon?

I am pretty sure that I will be able to announce the publication of this collection during the first couple of weeks of December. I've just got the last couple of stories to finalise and a few changes to see to in the Making Of... section of the book.

How are the ratings for the Youtube videos doing?

Very well - in fact I'm about to do a post on this very blog in a week or so about that very subject as a lead up to the annual new year announcement of which video of 2012 was the most viewed... I'm also looking forward to hitting my 20,000 hit on the Youtube channel, although I doubt that I'll reach that milestone before the end of 2012; but not too much after, I reckon. 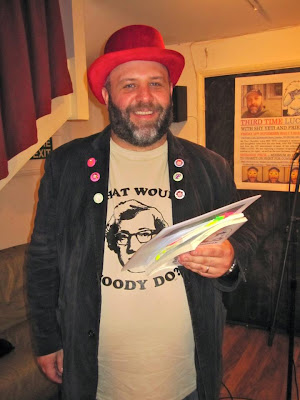 The photo above was taken by my friend Glyn Green during my THIRD TIME LUCKY show at The Poetry Cafe. Thank you, Glyn! The three photos that end this post are from my recent Venice trip. There will be a lot more photos from there once I get closer to editing those episodes. 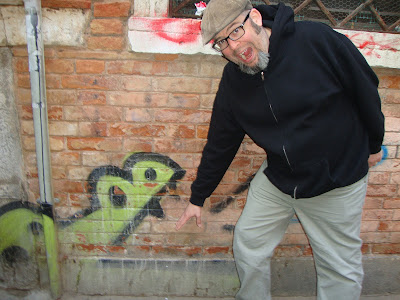 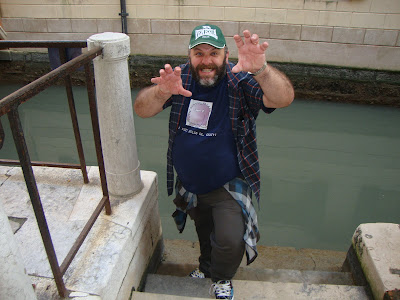 That's about it for now - our next post should be all about ARE WE THERE, YETI!? and will also contain the links to the SPOOKYCREEPY Show Youtube film. 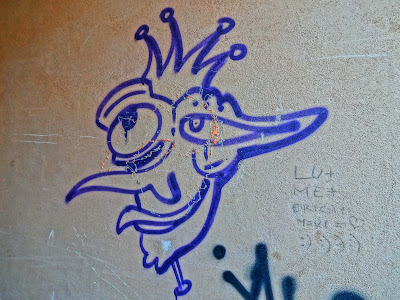