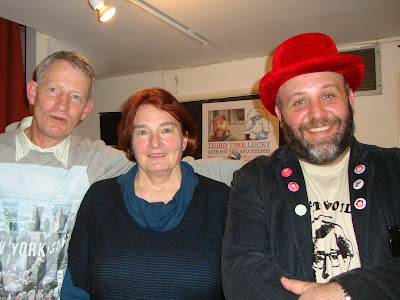 MR YETI AND FRIENDS...
BACK AT THE POETRY CAFE!!

So, you may ask... How exactly did the gig last Friday go?

Well, it may have been chilly and damp outside, but down in the basement at The Poetry Cafe the atmosphere was warm and cordial and despite the smaller crowd than usual we had a great night. The event was partly to celebrate the 10th anniversary of my third collection, THIRD TIME LUCKY, which I released at the start of November on Lulu.com.
All the links to that collection can be found in the following blog post:
http://www.thedaffypoet.blogspot.co.uk/2012_11_04_archive.html
For the first time, in a while, we had two other poets at the show, the first of these being Mr John Smallshaw - of course, who has been involved in all my shows since Summer 2011. You can read about John at:  http://pantechniconpoet.wordpress.com/ or http://johnsmallshaw.com/ John read a number of pieces, among them Requiem, Dead Heat and several new poem that were untitled...
Our second poet was Sally J Blackmore who you can read more about at: http://sallyjblackmore.co.uk/ Sally read from her latest collection, "Deployed", amongst the pieces that she read were the poems Soldier, New Ways, Sense Of Home, Translators, Homecoming and a number of others. In the second half she read from her collection "Random" the poems, Enough Excitement For One Day, Of A Certain Age, Flake and Waiting Game.
Hopefully I'll be including some of these pieces in one of the films from the night, if I've time at some stage I'd love to do dedicated videos for both poets - but we'll see as I have quite a backlog at the moment; although the live videos are quicker to edit than most. I've checked pretty much all the footage from the night and it appears that most of our performances were successfully recorded. Big thanks to Dominic M for being the cameraman on the night and to all those that came along to support the three of us. 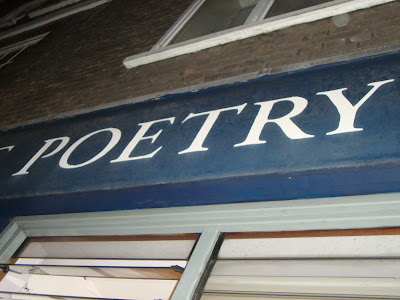 So, let's look a bit more at the specifics of the show from a yeti point of view...
THIRD TIME LUCKY - WITH SHY YETI AND FRIENDS
FRIDAY 16TH NOVEMBER 2012, POETRY CAFE, LONDON
The poems that I read were mainly from two collections, the 10th anniversary edition of 2002's THIRD TIME LUCKY and 2013's NOT AS SHY AS I WAS, which I've finished the writing work for, however there is still the proofing and formatting to be done. It was very much a case of then and now with my selection of readings, as follows:

Please note: All old poems with an asterisk (*) from THIRD TIME LUCKY

All other poems from NOT AS SHY AS I WAS, except for John... from ARE WE THERE, YETI!?

* Party Girl
* On This Very Spot 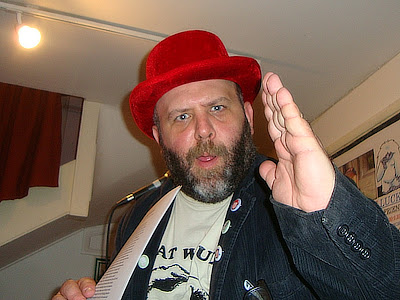 The first three poems were reasonably new ones from next year's NOT AS SHY AS I WAS collection. The first I'd never read before and was written for a live opportunity, the second I'd read at my last show in September, but it's one of my recent favourites so I thought I'd give it a second airing. The third of these pieces I'd originally read in late April at my friend Glyn and David's civil partnership. Glyn was there on Friday, which is why I chose to re-read it. All these poems were recorded in full by Dominic except for Another Yeti Poem of which only the first verse was captured.

The next six poems were from THIRD TIME LUCKY, the first (and, I think, the third) being ones that I've read on a number of occasions - whilst the other five are ones I think I've probably never read, although I've recently recorded versions of Butterfly and Fortnight during my recent Venice trip. This is one of the nice things about revisiting my early books - I keep finding pieces that I've not read before that are ripe for revival!

After John and Sally had read (as detailed at the top of the post) I moved on my usual slot of performing a song as a spoken word piece. This time I chose a recent song Last Friday Nite (TFI), as sung by American songstress Katy Perry - but this time I did it with a twist and performed it in teh style of Noel Coward! It seemed to go down well and now I need to consider another possibility to perform this way at next April's show. Plenty of time to consider what to select!

The final two pieces were from the THIRD TIME LUCKY, the first which I've never performed and the second which I've performed quite a bit on and off over the years. It is also included it in my 2009 SHY YETI RULES OK compilation.

The first four poems of the second half were all quite recent ones from NOT AS SHY AS I WAS collection, due out next year. The first three have all been recorded for Shy Yeti On Location episodes, although only the first has seen the light of day on Youtube, so far. The 4th piece I've not made a video for yet, although I may record it down in Dorset for my new year film, as that would suit the theme of the piece.

Party Girl
On This Very Spot

After Sally's second set, from her Random collection, I read a couple more THIRD TIME LUCKY pieces, the first an old favourite of mine and the second which I have never read live, but have recently considered recording a video for.

After John's second set I read three more pieces from THIRD TIME LUCKY, the first piece being one of my favourites, the second being a piece that I last read at The Cobalt Cafe in LA back in Summer 2011 and the third being the title track which I recently recorded a video for during a trip to Ghent in October 2012. The final piece of the evening was a poem that I've performed a number of times this year, most notably at the Broadstairs Folk Festival during the summer.

There were a number of poems from THIRD TIME LUCKY that I had intended to read, but which I missed out for timing reasons. They were, as follows:

Break My Heart, Computer Dating, Get Over Yourself, A Girl Like You, Herbal Teabags, Instructions To Life, Keyholes, The Park, Reincarnation, Soon On Your Way, They Found Him Wandering..., Things Ain't What They Used To Be..., Unfulfilled, Xmas Shop-lifter, I Love You Less

My first show of 2013 will probably focus on my ARE WE THERE, YETI!? collection, which has taken rather longer to be completed, but which hopefully should be out as the start of December.

Thank you to every one who came along, a total of £36 was raised on the night for the COMBAT STRESS charity. 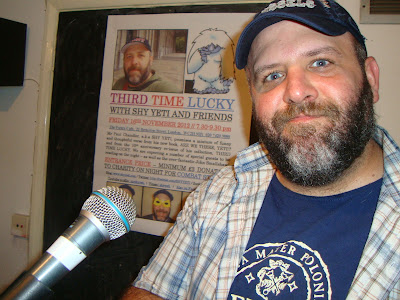 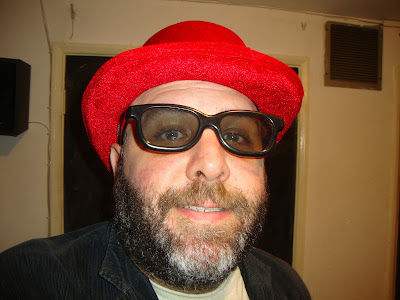 Next week, hopefully, we'll be looking at the next Shy Yeti On Location video and I am also hoping to be able to announce the release date of ARE WE THERE, YETI!? There may even be one or two more photos from the Venice trip!
More soon! 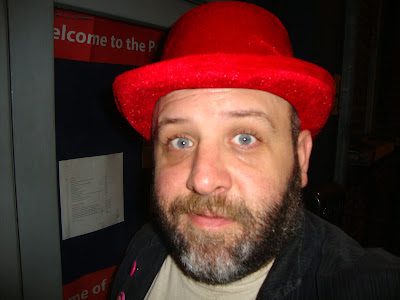