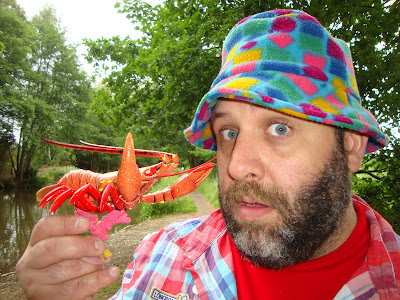 A DIARY OF A YETI AND ROCKY LOBSTER PHOTOS!

Seeing as we are hurriedly nearing the third week of July, with only a week or so more to go before my annual leave it probably about time for you to meet Rocky Lobster, star of my forthcoming SHY YETI BOTTLES SUMMER video.

Before we continued, I have some other news... The first episode of SHY YETI'S BEST OF BRITISH is up and ready to view; so here's some details and the necessary links:

SHY YETI'S BEST OF BRITISH is the first part of Shy Yeti's celebration of all things British, including some of the bad stuff too - in honour of the Queen's Diamond Jubilee. It was filmed in late May and early June around Norfolk and Surrey and contains two poems filmed on location, REVOLUTION ON THE 8.15 and KISS ME QUICK and one piece, JEALOUSY DID HIM NO GOOD that was filmed at my ROCK 'N' ROLLERCOASTER SHOW at The Poetry Cafe, London on Saturday 5th May 2012. There is also much silliness, a yeti dance and lots of gratuitous shots of tea and cake. The 2nd part of this two part series will be up before the end of the month. This episode also briefly stars Mr Calum Williamson who also acts as cameraman, alongside myself. The live footage was filmed by Mr Dominic McCauley. Music is by Luca. This film is a Shy Yeti Production, its contents are Copyright Paul Chandler, 2012.

I also thought I'd give you a look into exactly what I've been up to in a diary-stylee this week - which is probably how I'll be blogging throughout my time off in August anyway.

Up at 5.45a.m. for work and before breakfast I managed a few minutes editing on SHY YETI'S BEST OF BRITISH - PART 1 which is currently around 12 minutes long and entering its 2nd edit. I also worked on the covers of both TALES FROM THE MCWHISKERS' ARCHIVES and put the finishing touches to the cover for the next book I'm about to discuss, THE BEAST OF FRIENDS... During lunch I focussed mostly on the script-book for this project, doing finally proof changes on Script 5. Dominic has been acting as my proofreader on this one. My friend Dan Hodges also did some proofreading on pieces called AMNESIA and BEE BUSINESS from ARE WE THERE, YETI!? I also did a little bit of work on a couple of Mouse books and on some of my 10th anniversary re-issues of my early poetry collections, the next one, due out in November, being THIRD TIME LUCKY. In the evening I continued editing, although had a few crashes with the software - all the same, I'm getting nearer completion! Dominic also completed proof-reading Script 7 of BEAST OF FRIENDS, so only one more script to go!

I started Tuesday with a bit more editing before breakfast - every little bit helps; in fact I've now pretty much reached the end titles of the new episode. Still, a long way to go yet! Once in work I loaded up the Vimeo version of my previous episode SHY YETI GOES WILD... ON THE RADIO!!! PART 2, the links of which I posted last week - but you might as well have it again: https://vimeo.com/45491552

Other than posting this week's blog I also tinkered with the cover pages and put the finishing touches to Script 6 and 7 of THE BEAST OF FRIENDS, not to mention writing some lines for Series 2 and some paragraphs for a future Mouse Of Commons novel. I pretty much did a bit of everything that I'm working on and Dan H continued to help with the proofing for ARE WE THERE, YETI!? It's a long book, almost 400 page and 100 poems/stories, but we're getting there, slowly! After work I continued working on the latest video - deciding that part 1 was probably going to be too short, so I took the opportunity to add a poem that I'd not previously posted from my ROCK 'N' ROLLERCOASTER SHOW at The Poetry Cafe in early May 2012.

Today, along with working on the other projects and pretty much putting the finishing touches to the first proper edit of of the next yeti film, I also managed to complete two new prose pieces. One is called A YOUNG HEAD ON OLD SHOULDERS and it's a pretty autobiographical piece - sort of looking back aged 38 and a bit and wondering how you got to be where you are now; but in a good way! It's also a call to never completely grow up and a reflection that when I was a teenager I was a bit of an old head on young shoulders, but how I now feel like I'm going in reverse as I get older; but on my own terms. The second piece is called WHEN TODAY'S MODERN ARTISTS ARE NO LONGER MODERN and it's all about wondering how today's modern art will fit in with the Old Masters in a 100 years time and also proposes that almost anyone with a bit of imagination could probably fill an art gallery should somebody decide give sponsorship to the tune of a million quid! Both of these pieces will probably end up in my NOT AS SHY AS I WAS collection, which I expect to be out late this year or early next.

My evening was spent putting the finishing touches to the new yeti video - titles, music etc and it came in at exactly ten minutes, which is kind of nice after the last few episodes have been slightly longer. During the day I was musing a bit about adding the live poem to the SHY YETI'S BEST OF BRITAIN episode as far as whether the poem that I chose fitting the theme. The poem's called JEALOUSY DID HIM NO GOOD and I've never posted it online, until now. It's about a jealous man resenting everything - although that's not an exclusively British trait there is certainly a bit of a history of the Brits liking to moan - so I guess this poem does fit the episode after all!

The new episode was all ready to go when it suddenly occurred to me that Dominic deserved a credit as he actually filmed the footage from the Poetry Cafe. Thankfully it didn't take a lot of work to alter that - just changing the credits on the master project and reprocessing it! All done... Stranded at home a boiler malfunction (no, that's not a euphemism!) I tried to load up the video here, but came up against the usual problems that I have with my internet speed at home. So, it'll be debuting on Friday... Today, I also began work on  part 2 of SHY YETI'S BEST OF BRITISH - I think it'll be a pretty easy edit and there are a few very silly bits by the seaside and lots of out-takes from what I filmed with Nick Goodman in Salisbury in mid-June. 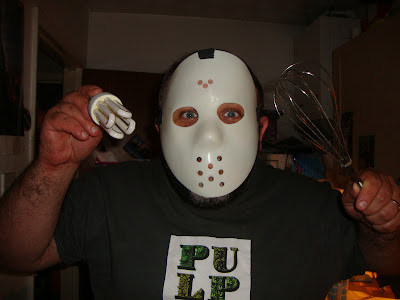 I began the day with a little editing of part 2 of SHY YETI'S BEST OF BRITISH and also, once in a better location internet-wise, loaded up part 1, which this time loaded first time... I also did quite a bit of Part 2 in the evening after work - but currently have over 25 minutes of footage for that episode - so there's still a long way to go yet.

What can I tell you about Part 2?

Well, at the moment - unless I decide to add any further live footage - it contains two poems, one - POLITELY ENRAGED, filmed in Wimbledon with Dominic and Mauro making cameos and the other filmed in Salisbury, partly in my parent's garden - partly in the Cathedral Close where I used to go to school and partly at Nick G's house. This second poem is a proper "on location" version of my new-ish piece BRITISH SUMMERTIME IS HERE!! which I first debuted on Radio Wey at the start of June and also at my Poetry Cafe gig a week later. The video for this poem was a co-directed by myself and Nick G.

As for other projects, Dominic finished off the 8th and final script of BEAST OF FRIENDS last night and so I made all the necessary changes and now all we have left to proof is the little behind-the-scenes essay on the first series - and then it's done! Dan H has also been doing a fine job at proofing bits and pieces of ARE WE THERE, YETI!?! and I also had a brief discussion with my mum who is currently proofreading the last couple of stories of TALES FROM THE MCWHISKERS' ARCHIVE and is hoping to get those back to me next week - meaning that hopefully all three of the new books will be ready for release at the start of September, just before my next POETRY CAFE show.

Today I was out and about with Calum in the Syon Park and Richmond area of London; I did film a little bit for a new episode that is provisionally entitled THE EPISODE WITH NO THEME, although it was mainly introductions as the weather wasn't so great and it was very wet under foot. The poem I began to film is one that I've only recently rediscovered from my LOVESONGS FOR THE BITTER AND TWISTED collection from 2004, whilst working ahead on the 10th anniversary edition of this book. It's called WHAT'S YOUR PROBLEM? and it's one I'll definitely record and probably perform live at some stage. I also wrote a new poem today, inspired by something that Calum said to me after I'd almost been attacked by a bee in Surbiton. The finished poem is very silly, but called BEE-SOTTED. As for part 2 of SHY YETI'S BEST OF BRITAIN, I'm doing very well with this and have currently got it down to just under seventeen minutes.

...And so we come to the end of this particular yeti week...

This morning I finished the changes on my GLAMOUR, AT ALL TIMES poem - that I typed on Friday and did corrections on whilst out and about on Saturday. The original plan of going to Hampton Court and Bushy Park went out the window because of engineering works on the trains - although we might get down that way on Tuesday as I have a day off. Instead, Dominic and I nipped down the road and filmed the end of WHAT'S YOUR PROBLEM? by the river, not to mention a silly head-to-head sketch. Useless fact #1... When this episode is eventually edited, if you look carefully you may notice one particular difference between the first verse and the other five and that is that I had a haircut and beard-trim between the two filming sessions! Part 2 of BEST OF BRITAIN is also doing well and as I sign off on this it's down to just under 13 and a half minutes and I've still the credits and out-takes to do; with a bit of luck it'll be finished and posted by the end of the week.

Anyway, as promised here are some of thos photos of Dominic, Rocky and I from our SHY YETI BOTTLES SUMMER episode, which I'm saving for September/October time. 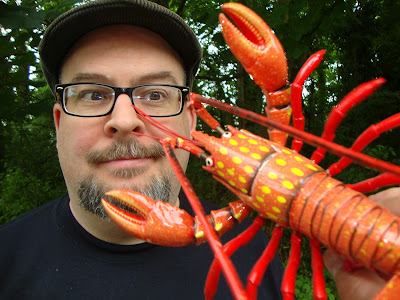 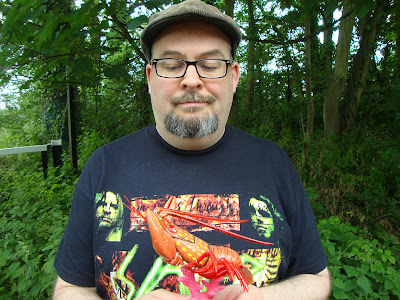 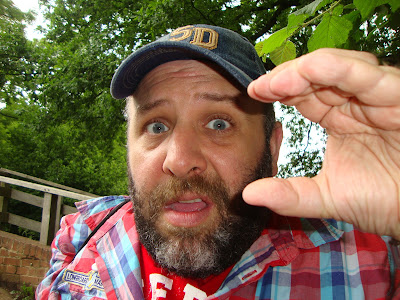 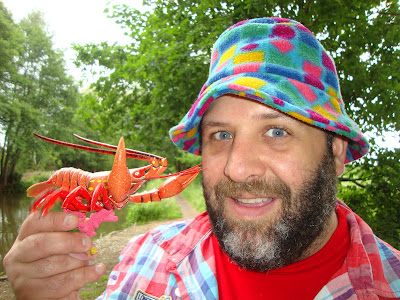 We're approaching 9000 hits on the profile - at the moment about 150 off that amount, but hopefully by next week's post we'll be well past it and who knows by the end of August we might have reached 10,000 hits... Hoorah!

Next week I'll post the Rocky Lobster poem which goes with these photos and finally update you on those ratings, as we stand - every video that I have posted on Youtube up until those posted in mid-June have already gained over 100 hits, which is a big change since I last blogged the ratings. 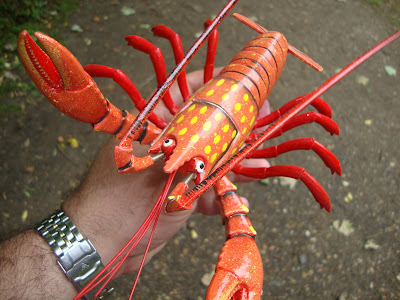