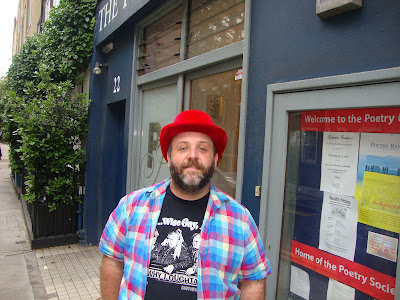 So, this week's post is mainly all about last Friday's Poetry Cafe show - but first I'd like to announce another SHY YETI ON LOCATION video - the second part of the two part German series that I filmed back in April. Here's the information and the links...

This is the second part of a 2 part series of SHY YETI ON LOCATION... The second episode of A TALE OF 2 CITIES, 1 YETI is set in Cologne and features a couple of Paul Chandler (a.k.a. Shy Yeti)'s furry poems - RABBITS DON'T REALLY LIKE LETTUCE and WE DON'T DANCE TO LOVESONGS. Other than the verse there is a yeti dance, a bit of a look around the city and plenty of other daft chitter-chat. Special guest starring Dominic McCauley. Music by Luca. Camera by P.C. and D.M. This film and its contents are Copyright Paul Chandler, 2012.

When it came to editing this one I did make a few cuts along the way; there was originally more with the duck, where he was offered a contract by a big Hollywood Producer - but instead chose to come back to the UK with us. There was also a bit more about why he is called what he is called; but really - it was a bit too distracting and would have made the episode even longer!

I currently have about half a dozen episodes in the "can" waiting to be edited - including footage still to post from the ROLLERCOASTER show, footage from the BLOG BONANZA/INTER-WEB show, the two episodes I filmed whilst off last week, the "lost" Hollywood episode and my recent trip to Radio Wey. There's a video of last week's show coming up and there should be links to that after the review of the night. Before I start working on the second SHY YETI GOES WILD episode I am currently focussing on the VAMPIRE COWS OF SCUNTHORPE SPECIAL. This is an episode that I filmed last summer with the possibility that it would end up as a 2011 Summer Special to come out around the time that the VAMPIRE COWS book came out... Anyway, it's 100-word stories rather than poems and I'm working on it now.

I also have some links to three new SOUNDCLOUD posts that have gone up this week...

THERE'S SOMEONE FOR EVERYONE - PG VERSION

The "polite" version of this piece from my "lost" 2009 album, PIETRY IN MOTION... http://soundcloud.com/shyyeti/theres-someone-for-everyone-pg

THERE'S SOMEONE FOR EVERYONE - X VERSION

The terribly x-rated version of the same poem. Actually, it's not really x-rated, but I do say arse.

Ah yes... It's the moment you've all been waiting for! At last you can listen to the full version of Luca's Shy Yeti theme!

Anyway... And so to last Friday's BIG BLOG BONANZA INTER-WEB SHOW (it started off, somehow, with two titles - so I've merged them together here!!) I haven't yet watched back every piece of footage from the night, but I am reliably informed by ace camera-man of the night, Dominic McCauley - that he filmed pretty much everything; so hopefully we have versions of all the poems listed below.

Beginning at around 7.30 I began the evening with a piece I first posted on this blog back in May 2006 from my POEMS TO MAKE BEARS GROWL collection.

The next 3 poems were all new ones from my forthcoming NOT AS SHY AS I WAS collection, which will be out later this year or early next...

The next batch of poems were debuted during the first couple of years of my blog and come from my THIRD TIME LUCKY, GO 4TH AND DIVIDE and AUTUMNAL E.P. collections. At least one of them, OWN GOAL? I had never read at a show before - and it also turned out to be the only prose piece of the evening. It was only whilst I was actually performing the show that I realised that I do tend to post my rhyming poems on the blog - but having to choose from the 120 or so pieces that I've posted on here in 10 years meant that I was also aiming to read work that I hadn't read live before.

John Smallshaw read at this point for the first of two ten minutes sets that evening.

2, NIL (Kirsty MacColl)
I WANT THEM TO SEE ME (ON TOP OF THE POPS) (2006)
THERE WAS AN OLD LADY OF BUDE…
The first half ended with my now traditional spot where I read a song lyric by a singer or group that I admire, as a poem - that and a poem about being on Top Of The Pops, which rather dates it although I suppose it's still on at Christmas. This poem was actually first published on the blog a while after it was written on the day of the last original Top Of The Pops episode in July 2006. The last poem of the first half was a limerick!
SECOND HALF

The first poem of the second half was a yeti-flavoured piece from DO YETI WEAR PYJAMAS?, whilst the next two are both pretty new ones that will eventually appear in my NOT AS SHY AS I WAS collection - and the 4th piece was one of the first poems that I ever read at The Poetry Cafe almost four years ago and which is also included in my IF POEMS WERE PIES collection, not to mention 2009's SHY YETI RULES O.K.

The next four pieces were from 2007 and 2008 around the time of SHY YETI'S INCREDIBLE PIE-CRUST COLLECTION, three of which I recorded videos for on Vimeo back in 2008, but which I've rarely or not ever read live before.

John Smallshaw read at this point for the second of two ten minutes sets that evening...YOU ARE

The next five poems were written between 2008 and 2012 and included in the books released during this period. I did have to trim a few of the intended poems in the end and so a poem from the blog in  2011 was missed - although I think it was probably represented amongst some of the newer poems read during the evening.

The final three poems were two that I've always liked and which I've recently recorded versions of for SHY YETI ON LOCATIONS episodes this year. The final piece was the newest poem I've written, to date - one that I also performed on Radio Wey the day after it was written, last week.
As mentioned, I cut out three or four poems from the second half, IF POEMS WERE PIES, CUPCAKE, JUST TO GET MYSELF TO YOU, WE'RE AN ITEM NOW and decided that BRITISH SUMMERTIME IS HERE, although new, was strong enough to use as my final poem of the night, rather than my traditional ending of I WILL EAT PIES...

I've been busy editing over the weekend and on Monday and Tuesday I posted up the first video from the evening on Youtube and Vimeo - 4 poems of mine and 4 of John Smallshaw. Here's some more information about it...

This is the first video from my recent Poetry Cafe show, Friday 8th June 2012 and includes 4 poems by myself and 4 poems by the fantastic John Smallshaw, my special guest of the night. My poems include: MAKING TOAST FOR THE ENEMY, FROM WHERE I STAND, MY LONG LOST FRIEND and a very new (and topical!) piece indeed, BRITISH SUMMERTIME IS HERE... John's poems include: BUTTERFLIES, THE SUCCUBUS, INSIDE OF ME and A FLY...  Music is by Luca. This film is Copyright the performers, 2012. There will be another film of the night released soon.

Thanks again to John Smallshaw for performing on the night, to Dominic McCauley for filming, to The Poetry Cafe and, of course, to all who came along and donated to the MS TRUST charity on the night. John and I will be back on Wednesday 5th September 2012. I'm expecting that, thematically, it'll be a show to celebrate my recent SHY YETI GOES WILD compilation - meaning lots of daft animal poems. My new book ARE WE THERE, YETI!? should also be ready at around that time - so there are bound to be some pieces from that, along with one or two new ones.

That's it for now, next week I'll probably share with you some behind the scenes photos from the SHY YETI GOES WILD 2 and SHY YETI'S BEST OF BRITISH episodes that I filmed late May/early June; not to mention posting one of the new poems that I wrote during that week.

There's a lot more to come! See you next week... 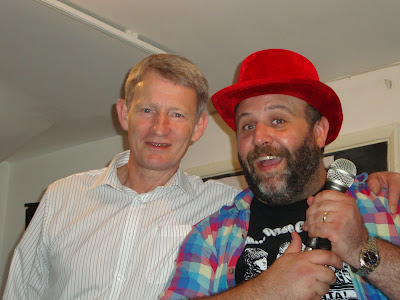 This post and its contents are Copyright Paul Chandler, 2012.
Posted by Paul Chandler at Tuesday, June 12, 2012