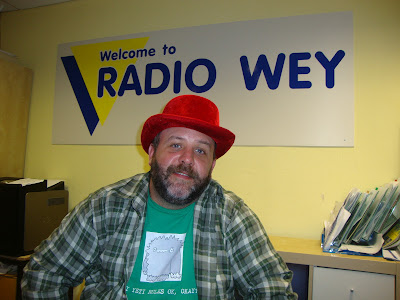 WEY TO GO: SHY YETI GOES WILD ON THE RADIO!!

Well, it's been a busy week - so there's a lot to get through. Which means, that I've had to postpone the ratings update once again - and what with the BIG BLOG BONANZA gig on Friday, it may be a week or three before I get around to doing that now... Eagle-eyed readers may have noticed that the next Poetry Cafe show has 2 titles - although I'm not sure which I prefer. The title on the poster is SHY YETI ON THE INTERWEB, but the Facebook advert went up as BIG BLOG BONANZA! Not sure how that happened. Oh well. It did, but it's the same show on the same night, so as long as a few people come along we should be fine! One thing that is definitely going right are those aforementioned Youtube ratings, which are averaging out at around 1000 a month, which is very pleasing... Anyway, I will update that list for you soon and I've also been working on a comprehensive list of all the poems that I've recorded for videos so far. I'll post that here soon too; whether you like it or not! ;)

Before I get on to my latest, rather last minute trip to Radio Wey I'll just give you a quick update on what I was busy filming during the second half of my week off. There will be some photo gallery posts when I get around to editing the actual films, but for now I'm focusing on getting the 2nd TALE OF 2 CITIES, 1 YETI episode completed; but I can assure you that there's a lot more to come, including everything that I read on Radio Wey on Saturday night... More on that in a bit...

So, between Thursday and Saturday Calum and I were up in Norfolk and area for Calum's birthday. Thursday saw a little filming around Colchester, including some shots that I'll be incorporating in the SHY YETI GOES WILD (ON THE RADIO) video. Having stayed over night in Norwich on Thursday, Friday saw us jumping on trains and buses between there and Sheringham - and then out to Holkham. Whilst travelling about I took in, for the first time, quite how many decorations were up for the Queen's Diamond jubilee and so I decided to work on an episode of SHY YETI ON LOCATION which is provisionally entitled SHY YETI'S BEST OF BRITISH. With the second of my SHY YETI GOES WILD videos completed mid-week it made sense to choose a new theme and so I've lined up 4 poems that I would say are reflect on a number of quite British institutions. This episode isn't completed yet, but should be by the end of the Jubilee bank holiday - I won't reveal all the titles of the poems just yet - but one of them is an old piece about the problems of travelling by rail; moaning about such things being a very British pastime! In addition to this let's just say that visually there are plenty of flags and bunting, ice cream, cups of tea, fish and chips, cakes and shots of the Norfolk coast around Holkham.

On Saturday I completed another poem whilst walking near Manningtree in the area where Constable grew up and first painted; in fact we visited exactly where he painted The Hay Wain. It was in this area that I read the poem KISS ME QUICK - a piece that would have worked best by the coast; but with the weather being what it was all you'd have heard was wind, so I decided it was best to read it in-land! Still, there are plenty of seaside shots to balance it out...

I also managed to finish a number of poems and stories during this part of the week off - on Thursday a daft piece called THE WALKING SEQUIN about a girl who dresses so brightly that she dazzles everyone. On Friday I wrote a poem about the British weather called BRITISH SUMMERTIME IS HERE, which even made its debut on Radio Wey less than 24 hours after being completed. I've also been working on a title piece for my NOT AS SHY AS I WAS collection and am 3 out of 4 verses complete on that - not to mention having written some ideas for another poem called THERE'S SOMETHING IN MY GARDEN POND. Finally on Saturday, on the train home between Waterloo and Walton On Thames I wrote a short story called VISION about a man whose fiancee is a contemporary artist. I'll probably post the BRITISH SUMMERTIME poem here on the blog in the next few weeks, but it'll also be in the Radio Wey video once that's done.

So, anyway - my visit to Radio Wey on Saturday 2nd June was a little last minute, but I'd put together my SHY YETI GOES WILD collection especially for my next visit; so I was prepared! In the end not all of the 11 poems that I read on the night were from that collection and one of them was brand new. Some of them you'll have seen in recent SHY YETI ON LOCATION episodes and a couple were older pieces, but the titles were as follows:

I also got to play a few favourite and obscure tunes, that either went with the poems or fitted in with certain other themes of the programme and these were...

They'll be a few more photos nearer the time that the video is edited - which reminds me; here is a rough list of forthcoming SHY YETI ON LOCATION episodes, roughly in the order that they're being edited.

I think that's all that is in the can or almost in the can, for now... As of Bank Holiday Monday, 4th June I have been filming out on Wimbledon Common, which leaves just one final poem for the BEST OF BRITISH episode. Following the completion of this and the live show on Friday, my next big filming session will be in August, when I'm off work for 3 weeks and hope to be filming in both The Lake District and Broadstairs (once again); along with a couple of other locations.

I'm hoping to have another video out late this week/early next - but more on that next week when I'll alsol be reviewing our BIG BLOG BONANZA show (a.k.a. SHY YETI ON THE INTERWEB) - which features not just me and John Smallshaw but another special guest! I can't believe it's all come around so quickly! 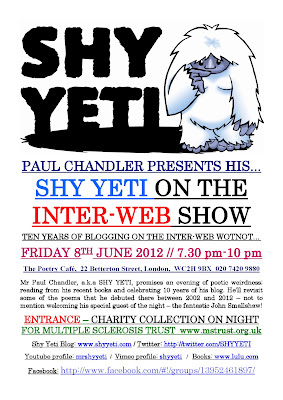 This post and its contents are Copyright Paul Chandler, 2012.
Posted by Paul Chandler at Tuesday, June 05, 2012