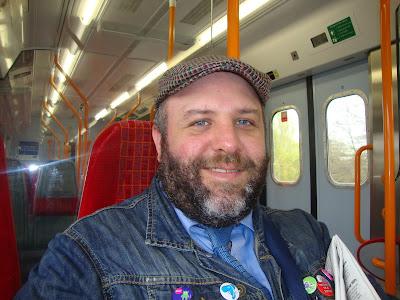 MORE LIVE YETI AND STUFF ABOUT THE NEW BOOK...

This week I'm here to unveil another live video from my ROCK 'N' ROLLERCOASTER SHOW and to share with you a piece from my forthcoming collection, ARE WE THERE, YETI!? It's looking to be my longest collection yet - but then it is chock-a-block with 100 short stories and poems; in fact there are probably more stories, which is why it's ended up so long. The publication date is still provisional at this stage, but I'd like it to be out by July/August - a year almost exactly since I began writing it. I'm aiming to read pieces from it at my Poetry Cafe show in early September - so that's roughly the time-scale I'm aiming for. At the moment all I've left to do is to proofread it through, so it shouldn't be a problem.

Anyway, more about that later and for now we'll move onto the next video...

Shy Yeti presents... The second of three visits to The Poetry Cafe, Covent Garden for his ROCK 'N' ROLLERCOASTER SHOW, as performed there on Saturday 5th May 2012. This was a night to celebrate the 10th anniversary of Shy Yeti (otherwise known as Paul Chandler)'s 2nd collection, ROLLERCOASTER and also to raise money for charity - on this occasion MS TRUST. Poems include KEEP ON GETTING IT WRONG, EIGHTEEN HUNDREDS EASY RIDER, WHY AGNES YOU'RE LOVELY and I AM A JELLY FISH. His special guest on the night was the fantastic John Smallshaw - and two of his poems appear in this film: LATE NIGHT CALLER and A FISH CALLED PYTHAGORAS. There will more footage of the night released over the next few weeks and this film even includes a specially recorded yeti dance! Cameraman for the evening was Dominic McCauley and he also appears during the links. Mr Yeti recorded a few bits too and edited it all together. Music is by Luca. This film and its contents are Copyright Paul Chandler/John Smallshaw, 2012.

The linking pieces in this video were actually filmed back in late February when I thought I was going to be doing the ROLLERCOASTER show back in March - and the links were filmed quite near to my home in Weybridge. Luckily there was only one small comment about the original date of the show, so I was able to use everything else. As I've mentioned before I'll now be moving onto the second and final part of my German trip, before editing a third and final live video from ROLLERCOASTER... Any footage left over will pop up in any videos that I film over the next few months.
Next week I'll hopefully be posting another video and taking a look at how the online videos are looking - we're getting up towards 7000 hits on Youtube, so I'm kind of hoping that we may have reached 10,000 by Christmas. We're also drawing closer to my next Poetry Cafe show, so they'll be more live footage. I'm lining up a completely different set - selected from poems that were first posted here on this very blog to celebrate the 10th anniversary.

To finish with I'm posting something from the next book - it's another rather gory short story called CLEANING UP AFTERWARDS... Enjoy!!

That's it for now - more next week,


Zak regarded the contents of the skip with a frown; he was the caretaker of a big block of expensive flats at The Barbican, and it was part of his job to keep an eye on what was going on with the salvage for the building.

Sometimes he’d uncover some quite choice pickings amongst the waste – the people who lived in the block were rich and often disposed of perfectly edible food on the day it was “technically” meant to expire. It wasn’t unheard of for Zak to end up dining on caviar or the remains of a joint of beef, if he kept his eyes open.

He was used to seeing all manner of things; false teeth, hearing aids, oddly shaped vegetables; not to mention embarrassing school photos and private letters.

…And then, sometimes, there was worse – much, much worse…

As on this particular day…

Generally Zak tried not to mind as long as protocol was observed; but today someone was really taking the biscuit…

Zak stared disapprovingly into the black sack that slumped before him. It was full of miscellaneous body parts; legs – severed arms – a couple of heads and all sorts of other discarded organs. It was Mr Sylvester again, their resident serial killer.

“This shouldn’t have happened…” Zak grumbled, not relishing having to go speak to the man again; for Mr Sylvester was an Arsenal supporter and Zak followed Spurs. “That man never listens. He’s had enough warnings! This is his last chance!” he muttered furiously. “Why doesn’t he listen? Really, it’s not difficult… Body parts don’t go in the skip! Body parts go with food scraps in recycling…”


CLEANING UP AFTERWARDS is from the Paul Chandler's next book, ARE WE THERE, YETI? which is due out in the Summer from www.lulu.com. All content of this post is Copyright, Paul Chandler 2012