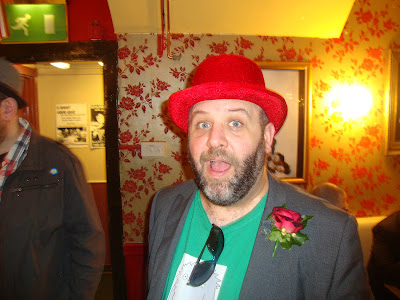 
I'm hoping to get THIS anniversary right! You see I think the 200th post back in April ended up being our 199th post - it only became evident when blogger changed its format a week or two ago and it became easier to see how many posts had been posted! Ooops. Anyway, this definitely IS the 10th anniversary! 10 years ago on Thursday 2nd May 2002 I began this blog with a little limerick...

There was a young man from Nantucket,
Who kept his wife's head in a bucket...
It would bob up and down -
With never a frown...
And now and again he would duck it! :)

Since then, I have debutted another 118 new poems in my posts, although one or two recently have been to promote my 10th anniversary collections, but anyway - most were posted here first before they were published and some even exist on the blog in slightly earlier drafts that were later altered closer to publication. Not all were poems, more recently some have been short stories or prose pieces - but that hardly matters, what matters is which ones they were.

I'm going to end this post with a list of those poems, but first I want to announce a new episode of SHY YETI ON LOCATION - a slightly longer episode too in celebration of 10 years of blogging. Here's some more information and the links to where you can view it...

SHY YETI GOES WILD is an extra-special episode of SHY YETI ON LOCATION to celebrate 10 years of yeti-poem-blogging on Paul's www.shyyeti.com site. This episode includes 4 poems on a wild-life theme - DIAGONAL CAT, MICE TAP-DANCING, WHY DON'T DRAGONS CLEAN THEIR TEETH and HOORAY FOR BEARS. There are also 3, yes THREE yeti dances in this edition, which was filmed in Surrey, London and the surrounding area between 23rd March and 8th April 2012. This episode guest-stars Dominic McCauley and Mauro MausCat Notch. Camera work by Paul Chandler, Dominic McCauley and Calum Williamson, music by Luca. This film and all poems contained within it are Copyright Paul Chandler, 2012.

You can currently view this episode at:

There is also a special mini compilation available for this episode: 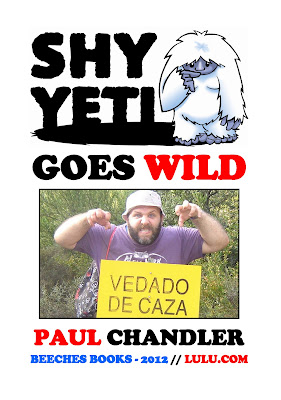 SHY YETI GOES WILD is a mini-collection of over 25 poems that Paul Chandler a.k.a. Mr Yeti has written over the last few years concerning animals or pets. These include: BECOMING MORE CAT-LIKE, THE BLACK-EYED GROWL, DIAGONAL CAT, DO SHEEP MIGRATE?, A FLEA TEA PARTY, A LITTLE MOUSE, A WASP IN A WIG and many more. These are pieces that he’s read at gigs and open-mike events and which appear to get the furriest, most enthusiastic growls from a crowd! Go on, take a peek!

It's available in paperback for £4.99 at the following link: 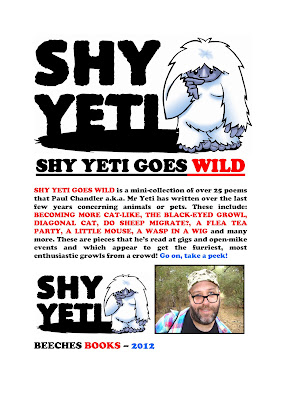 I'll hopefully be doing a Radio Wey show in June or July to promote this mini-collection and celebrate the 10th anniversary too. More news on that when I have a definite date for it.


This isn't the last you'll hear of the 10th anniversary of this blog - I have two shows coming up at The Poetry Cafe, one this Saturday 5th May and one on Friday 8th June 2012. The first show the postponed 10th anniversary show for my 2nd collection, ROLLERCOASTER and the June date is to celebrate the blog. The May show will comprise of some new pieces and pieces from ROLLERCOASTER and the June show will comprise of my favourite pieces from the 118 that I have posted on here since 2002.

Anyway, enough about that for now... I'm busy putting together my next full collection, ARE WE THERE YETI!?, but as I am also working on the next Mouse Of Commons book, due out in July - I don't expect my next prose and poetry book to be completed until mid-August, in time for my September Poetry Cafe show.

May there be many more to come!!!