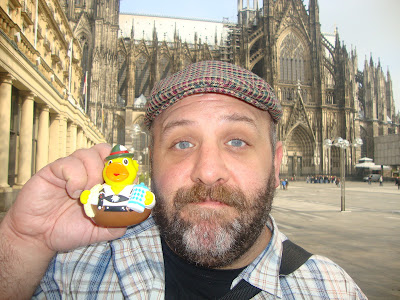 BACK FROM GERMANY AND A NEW YETI FILM...
Hello!

Well, I am happy to be able to announce that on our return from Germany there are now two new episodes in the can - one from Dusseldorf and one from Cologne. At the moment this two parter has been tentatively entitled A TALE OF TWO CITIES - AND ONE YETI! The episodes feature two poems each and lots of the usual yeti daftness; we were reasonably lucky with the weather so managed to record quite a bit - including two yeti dances, one which even caused a car to slow down to view it! Aside from the poems (a mixture of old and new) I hope I managed to get enough footage to give you a bit of feel for the atmosphere and appearance of both cities.

At the moment I'm expecting to start work on these two episodes once I've finished work on SHY YETI GOES WILD - but next week I plan on giving you a bit of a sneak peek behind the scenes on the German shoot... Next week, in a separate post, I'm also hoping on posting an exclusive new poem in honour of two very special people - but I have to keep that one under my hat for now...

Moving on, I am glad to be able to announce that I have just uploaded a new SHY YETI ON LOCATION episode - here's a bit about it...

SHY YETI WELCOMES SPRING is a new episode of SHY YETI ON LOCATION filmed in March 2012 and released the following month. It also includes a couple of "lost" poems filmed in June 2011. The episode was filmed in a number of locations - from a "secret location" in London, to Broadstairs and also up in the Durham area of England. Poems include NOT A HAPPY BUNNY, FLAUNT TRADITION, THE HALF YOU LEFT ME WITH and the new/previously unreleased A YETI IN A HAT. As usual there is also a lot of silliness, a yeti dance and cameos from Dominic McCauley, Dan Hodges and Barry Dunkley. The music is by Luca and this episode's cameramen were Paul Chandler and Dominic McCauley. This episode and all its contents are Copyright 2012.

Before we go here is just a quick update of all SHY YETI ON LOCATION episodes that are currently unedited, but that are "safe in the can", as it were!

These are the episodes I currently have in the can, however I am on leave for a week in late May and also have 2 live gigs coming up in May and June - so there will be new episodes filmed then. I'm also off for 3 weeks in August - so goodness knows what will be going on then!

That's about it for now - more soon!
Yeti hugs, 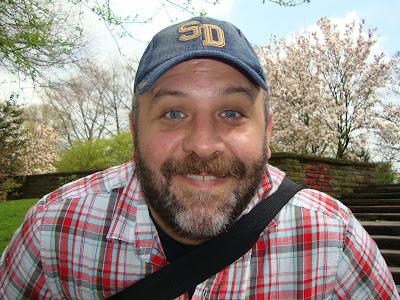