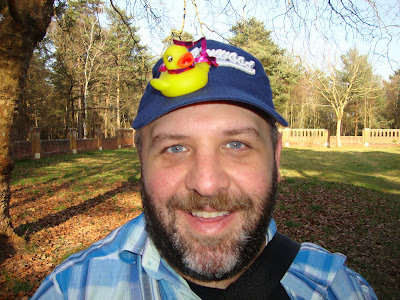 This will be a slightly shorter post than usual, because I'm just about to go away... Yes, it's the German trip, finally! But more on that later...

I've been quite busy on both ARE WE THERE, YETI? - basically getting it in shape so that I effectively have a draft edition to do final proofing on. I've also added a few new pieces to NOT AS SHY AS I WAS... I've been typing up some stories that I've written recently, but during my commutes have been working on a number of new poems - titles include: THE BEST WORSTEST DANCER IN THE WORLD, THE WORLD IS FULL OF BULLIES and WIGS AND CO. So, they sound my usual sensible fare, don't they!? ;)

Filming-wise - and in slow time, I've been working on my SHY YETI GOES WILD episode. This was originally meant to go alongside my next Radio Wey appearance and I've even put together a small collection for this; although as Tim is only doing his show once a month it may take a month or two before we manage to find a date that suits us both. SHY YETI GOES WILD is an animal-themed compilation and so I've been recording animal poems for a forthcoming episode - in fact the Easter weekend has pretty much seen me complete this episode after the initial filming I did back in late March around Horsell Common near Woking. Further filming has since taken place, again near Woking - but also in Richmond Park, in the Alton area of Hampshire and finally up in Highgate Woods on Easter Day. In fact the main question now is do I do one long episode or have I enough for a two parter... As I'm hoping to film around the Windsor area on Tuesday 10th April, weather allowing, it may be that I do record enough for a two-part special. Both Dominic and Calum have been helping me out with the episode and Dominic makes an appearance - but I'll do a longer post on this one in a week or two and show you a few behind-the-scenes photos.

I've also been quite busy working on completing a poem for my friend's Glyn and David's civil partnership poem; which I'm sure I will eventually post here - but for now all I can tell you is its title... THE WEDDING BREAKFAST!! I was specifically asked to write a quite silly piece and so that's exactly what I did; although it does have some rather nice wedding bits too! Anyway, the wedding is on Friday 27th April 2012 and hopefully there will be a video to show you after that date; so watch this space!

I've also been busy editing the next SHY YETI ON LOCATION video - which I hope will be ready for you once I'm back from Germany, as it's almost done. It's called SHY YETI WELCOMES SPRING and was mostly filmed last month in Broadstairs and London; although it does feature a couple of poems that I saved from the "digital cutting room floor" which were filmed in June 2011.

As I've said before, I'm a little reticent to talk about my big trip this week to Dusseldorf and Cologne just in case something goes wrong and I don't get there - or I do get there but I lose my camera or delete the files! It has happened - AND there was snow in Scotland only last week; who knows what might happen! I may even run off to join my yeti relatives... Now that WOULD be some video! ;)

But anyway aside from all that I do hope that we get there and if we do then next week I'll be able to tell you a little more about what I've filmed! But let's not tempt fate, aye!?

Ratings... We're creeping slowly towards our 6000th hit, which - if memory serves me is over 2000 hits since I last mentioned this subject back in late January/early February 2012. Anyway, the ratings are coming up next - bizarrely Part 2 of Sutton Park has overtaken Part 1 by quite a few hits; I have no idea why that is! Meanwhile, some of the other videos are rattling up the chart - I'll leave you to look, should you wish to and leave you with the news that there are now 39 videos with over 100 hits!

This post and its contents is Copyright Paul Chandler, 2012.
Posted by Paul Chandler at Monday, April 09, 2012

Labels: "SHY YETI", ARE WE THERE YETI, NOT AS SHY AS WAS, POEM, POEMS, POETRY, SHY YETI
Newer Posts Older Posts Home
Subscribe to: Posts (Atom)