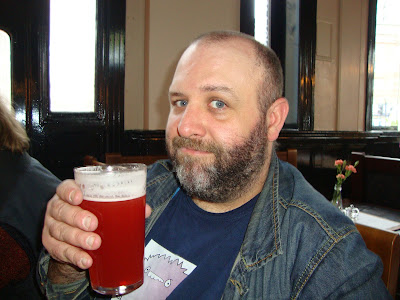 AN UPDATE ON ARE WE THERE, YETI!?

I do hate to begin with bad news... But as the news I have is of the bad = possibly actually good afterall variety I am confidant that it won't bring TOO many tears to the eyes of my collective readers. (All 4 of you!) Basically, I've had to POSTPONE the gig on the 16th March at the Poetry Cafe! (A double booking by the venue, say no more! *sigh*)

SO, what's the good news, you may ask?

Well, we now have TWO gigs - one in April and one in May - not to mention the one in late Summer... Anyway, they'll be more details on all this over the next week or two; but the dates are Thursday 19th April and Saturday 5th May - AND they'll be a special guest for both dates!

This week I thought I'd bring you up to speed on my next full collection, due out in early Summer. You probably already know that it's to be entitled ARE WE THERE, YETI!? So that's a good start...

As of last week I typed the final piece for inclusion in this collection - there are 100 in all - a dozen or maybe slightly more are poems and the rest are either short stories or vignettes...

I haven't shared the titles with you yet, so I'm going to do that now...

ALL SWEETNESS AND LIGHT
AMNESIA

108
AN ASYLUM FOR AUTHORS
ARE WE THERE, YETI?
AUNTIE ASTRID ( SPECIAL)
BEE BUSINESS
BEING STALKED BY THE LETTERS
BEST PANTS
THE BODY IN THE BOG
A BOY’S DREAM OF FLIGHT
BREAKING INTO THE JAIL
CACTUS HEART
CHRISTMAS LIGHTS
CLEANING UP AFTERWARDS
COLLECTING HEARTACHE
COMING CLEAN
THE CONFESSION BOX
CREEPY, EXOTIC
THE CREEPY SHOW
A CUP OF SUGAR
THE DAILY GRIND
DEAR, DEARLY DEPARTED
DEATH WARMED UP
THE DUST OF AGES
AN ENQUIRING MIND
EXCITEMENT IN LIFE
FEEDING TIME
A FLY ON THE WALL
THE FOOD OF LOVE
FRUIT BATS
GLUE TO MEND A BROKEN HEART
GOOD TIMES AGAIN
A HAPPY EX-MAS
HEALTHY LIVING
THE HOODIES NEXT DOOR
HOW MONEY SPIDERS GET THEIR NAME
HUSBAND POTENTIAL
THE HYPOCRISY OF OLD AGE
THE ICE-CREAMING AD-DABS
INK ON HER HANDS
IN THE LOCKER NEXT TO MINE
IN THE SOUP
INVITE A YETI ROUND FOR TEA
IS A TOADSTOOL A TOAD’S TOOL?
IS IT CHRISTMAS ALREADY?
JELLY-BABY
JITTERS
JOHN, I’M ONLY RHYMING
AND I (GET ON JUST FINE, THANK YOU…)
LIFE ISN’T ALWAYS FAIR
LIVING IN
LOSING YOUR MEMORY ISN’T ALWAYS A BAD THING
MINOTAURS AND OTHER EVERYDAY LOVERS
(A TRILOGY)
NEVER MIND THE MINOTAUR
KRAKEN YOU HEAR ME?
CTHULHU, YOU ARE HOT!!
MISTLETOE MANIA
A MOURNING YAWN
MURDERING THAT SONG
MY LONG LOST FRIEND
NEVER, NEVER BE FORGOTTEN
NEVER TRUST A SKINNY FISH ‘N’ CHIP MAN
A NEW BOOK IN THE FAMILY
NOM, NOM, NOM
PART OF THE FAMILY
A PHOTO, FALLEN
RATTLESNAKES!!!
REHAB... FOR CANNIBALS!
RICH PICKINGS
RING, RING
RUNNING LATE
SANTA’S BIT ON THE SIDE
A SEAT ON THE WING
A SENSE OF STYLE
THE SERIAL KILLER OF LITTLE
A SHADOW OVER COVE
THE SHAME OF A MIDDLE-CLASS BONNIE AND
SO IRRITATING!!!
STATUE ESQ.
STATUS SYMBOLS
SWEATY YETI!!
TAKE CARE WHEN GIVING CHRISTMAS PRESENTS
THERE ARE NO RULES
TOAST
TOO SHORT TO BE A YETI
A TRAGIC DEMISE
TRICK OR...
THE TRUE LIGHT (PROSE VERSION)
TURN AND TURN AGAIN
THE UNPUBLISHED NOVEL
A VERY SHY PSYCHOPATH
VIEW FROM A FALLEN OAK
THE WAR AGAINST RED TAPE
THE WEDDING PLANNER
WEIRD WIDE WEB
WHAT GOES AROUND
THE WRONG PEN
A YETI HISTORY LESSON OF
YOU’RE NO FRIEND – LET’S BE ENEMIES!!
YOUR NEW BOYFRIEND’S A MINGER

A few of those you may already be familiar with as I've either been performing them at shows or recorded them for videos or have posted them on the blog - or even in the case of CACTUS HEART named a compilation after them in advance of the publication of the collection; in fact ?? of these pieces appeared as a preview of this book when CACTUS HEART was published back in February.

The poems ARE WE THERE, YETI!?, INVITE A YETI ROUND FOR TEA and JOHN, I'M ONLY RHYMING I have been reading aloud almost since they were written and they have also appeared in some of my Shy Yeti videos; INVITE A YETI... in both a live and location-based version appeared at either end of my YETI HUNT U.S.A. series which I began recorded between in late July and mid-November 2011 and whose 8 episodes were edited and posted between October 2011 and mid February 2012.

ARE WE THERE, YETI!?! itself began life on around abouts the 4th July 2011 when I began work on the title poem - which was completed on the 21st July and was only a few days old when recorded in California... This book has taken a little longer than the previous two collection THE VAMPIRE COWS OF SCUNTHORPE and FUNERAL FOR A SHOE - but that's also been partly because since late November once I reached around 90 of the 100 pieces required I started to experience a bit of an excess of material and then had to decide which pieces went into YETI and which pieces went into the next collection NOT AS SHY AS I WAS. Mostly I chose shorter pieces for NOT AS SHY and tried to keep anything written before the end of November 2011 for YETI. NOT AS SHY AS I WAS is probably a good quarter way through being written as a result of that overflow of ideas.

It's not long until my next gig now... The main focus of what I will be reading is the 10th anniversary reissue of my second collection: ROLLERCOASTER, but I also intend to read from CACTUS HEART, my recent compilation. I've also chosen a few completely new pieces for the night too.

Anyway, there'll be more about this next week... Not to mention news on my next SHY YETI ON LOCATION video which should be posted around then too.

Next week I'll hopefully have more news on the gigs and we'll also be discussing the next video - title as yet undecided - but it's the one I filmed in the New Forest back in January. It should be ready to be posted by this time next week and it's looking to be a fun-packed poetting extravaganza!!

PS ...To all those in the know I can confirm that Friday the 24th turned out to be as awesome a day as we hoped, thank you muchly for asking!