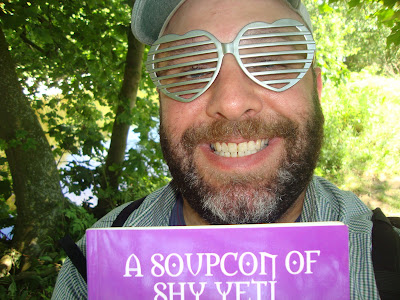 This week I'm here to announce my next appearance on Radio Wey - but also to announce one or two other things! First up I have some links to a new SHY YETI ON LOCATION episode - the penultimate episode of YETI HUNT U.S.A., no less! This week we are also celebrating passing our 5000th hit on our MRSHYYETI Youtube profile - we've had over 1000 hits in less than a month too; the previous 3900-and something hits took us over 2 years! Hopefully we're doing something right; but at any rate it's been a lot of fun seeing the rating charge up day-by-day since mid-January; although we're not quite sure what we've done to deserve it!

YETI HUNT U.S.A. is back for its penultimate episode... In Part 7: MEETING YETI X! the boys finally meet their contact, Yeti X in San Diego - but there is also time for a yeti dance, a poem, a short story and a whole lots of pelicans; not to mention several seals down in La Jolla Cove. The story is called A DAY IN THE LIFE OF A DIVA and the poem is called HALLOWEEN DON'T PAY THE RENT from the 10th annivesary edition of JUNK/FOOD. This episode was filmed in mid-November 2011 and also stars Dominic McCauley and includes music by Luca. There is also footage from Paul's November 2011 Poetry Cafe show, as filmed by Calum Williamson. The copyright of this film and the poems included in it belongs to Paul Chandler, 2012.

Another poem from my 2007 album SHY YETI'S FINEST HOME-BREWED VERSE! It's a silly little piece inspired by my own granny whose name was Ethel! Surprisingly! I'm not aware of her being acquainted with any garden gnomes or teddy bears - but she did definitely draw underwear on Page 3 girls! Well, somebody has to! :) This recording and the poem GRANNY ETHEL KEEPS THEM DECENT is Copyright Paul Chandler 2012.

This poem can be accessed at the following link: http://soundcloud.com/shyyeti/granny-ethel-keeps-them-decent

Not a lot to say about this until it's done - but for those who may want to listen live, I'll be on Tim Mitchell's RADIO WEY show on Saturday evening between 8 and 10 (also repeated on a Thursday afternoon, I believe...) You can tune in at: http://www.radiowey.co.uk/ Hopefully there'll be a video at the end of it; but you'll just have to wait and see...

As I may have mentioned our ratings have been increasing rather speedily over the last 3 weeks and as it's nearly 6 weeks since my last update I've included the new ratings at the bottom of this post... At time of posting we're nearing 5100 hits; so who knows where we'll stand in another 6 weeks! All I will say is that I'm very pleased to announce that over 34 of the films now have over 100 hits! Thanks again to everybody who's been watching them...

That's about it for now - next week I'll tell you how my night on Radio Wey went! :)

This post and its contents are Copyright Paul Chandler, 2012.
Posted by Paul Chandler at Thursday, February 09, 2012