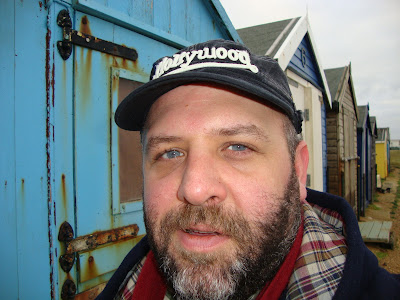 UNEXPECTED FILMING, NEW STUFF AND SOMETHING FOR YOU TO READ...
Hi,

I've been rather more busy that expected since I finished work on Friday - despite having a cold I end the weekend having achieved quite a bit creativily. I credit it all to seeing Hannah And Her Sister at the BFI on Friday; on the train home I couldn't stop writing!

Well, basically I wrote quite a bit this weekend - five short stories and a couple of poems - not to mention writing about half of the poem that I have been commissioned to write for a friend's civil partnership ceremony in April.

You want to know more? Nosey aren't you? Okay then... I wrote five new stories - three on Friday night on the train home and two on Sunday afternoon after a pleasant walk down the old railway line between Finsbury Park and Highgate.

The titles are, as follows:

A short story about a lonely cinema-goer.

A story about what happens to those old friends that you forget...

A story about a man who has faked his death...

A story about a cat who suddenly starts causing havoc... Or does he?

A story about a rather enchanting statue...

There are also a couple of new poems; they were both started last year, but left unfinished. One of them I began last September and is called DRUNK ELK, after a true event that you can read about here: http://www.bbc.co.uk/news/world-europe-14842999

The other one is called I CLEANED MY DIRTY MIND (BUT IT'S STILL FILTHY!) and was one that I began around April last year. I was always rather keen on the title - so I'm glad I was able to make something out of it. Both of these I will probably unveil at my Poetry Cafe show in March, along with a couple of the new stories.

I also made a bit of headway on a poem that I am writing for the Civil Partnership of two friends of mine. But I will say no more about that for now!

A New Episode Of Shy Yeti On Location

I hadn't intended to film an episode this month, in fact I wasn't sure I would have cause to until the Poetry Cafe show or my next appearance on Radio Wey. However, the weather was bright - I had my camera with me and also something to read; not to mention Calum there to act as cameraman! So, off I went! The poems come from my SHY YETI RULES O.K. collection - which I'd just received a copy of with the new cover. I also managed plenty of silly banter and TWO - yes, count 'em - TWO YETI DANCES!!!

It's the same as the Youtube link, only for people who... err... prefer Vimeo, basically!

I'm also doing very well on the next video which will be YETI HUNT U.S.A. - PART 6 - although I'm not sure whether to post the SHY YETI OUT IN THE NEW FOREST video first. I'll see how it all comes together and let you know nearer the time!

Finally, I end this post with a piece that you won't have seen before because it's from my forthcoming ARE WE THERE, YETI!? collection. Still no exact date as to when this will be published, as I'm still typing up the last few pieces and will then have to finish the formatting and proofreading. I'm aiming for May-time at the moment; around the time of my Summer show, if a suitable date can be found for one.

The piece I want to share with you is called COMING CLEAN and was inspired by last Summer London riots and is a short story about what one unfortunate looter who steals the wrong item!

When Mick had joined his friends on the night of the riots he knew in his heart that nothing good would come of it and that most of his mates were only joining in to get as much free stuff as they could lay their hands on. He realised that getting involved was a very stupid thing long before he was handed in to the Police; but losing face before his friends had been the swaying factor. He’d been drunk and peer group pressure had most definitely played a part.


His friends had been part of a gang who had broken into an electrical store. “Just get in there – take the first thing you find and then get right out as quickly as possible…” he had told himself – and so he had.
It had been like some kind of horrible dream; he could barely remember grabbing the box and running with it. It was only when he got home that he discovered that he had stolen an industrial vacuum cleaner – a state of the art one of all things! Although housework was usually the last thing on anyone’s mind in the squat that he lived in, Mick couldn’t help but open the box just to see what it looked like. However, had he managed to wheel it home; it was almost the size of a small wheelie bin – still it was a very nice – very shiny and modern.
He plugged it in. Big mistake.
“YOU DID NOT PURCHASE ME LEGALLY…” declared the machine – there was a whooshing noise and the next thing Mick knew he was heading for the Police Station in the belly of the vacuum cleaner he had stolen.
Really – talk about coming clean…


COMING CLEAN is from Paul Chandler's forthcoming collection of stories and poems - ARE WE THERE, YETI!? which is due out early Summer 2012. The story and the contents of this post are Copyright Paul Chandler 2012. 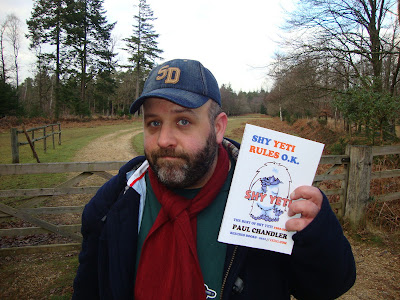