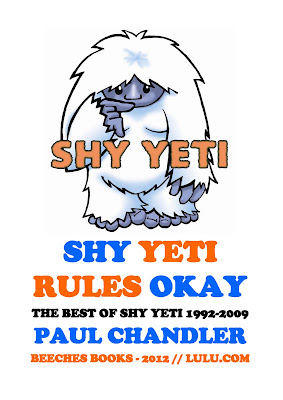 As I promised, this week I'll be giving you a run-down as to what you can expect from me during 2012. To start with, let's talk about yeti films! I want to begin here because I have a couple of new videos to bring to your attention...

This is the second film from the 10th anniversary show for my first collection of poems: JUNK/FOOD which was self-published in autumn 2001. A special 10th anniversary edition of this book was released in October 2011 and this show took place at The Poetry Cafe near Covent Garden on Friday 18th November 2011. Guest star of the night was the fantastic John Smallshaw, who also appears in this video. Other footage from this show is contained in a number of my other SHY YETI ON LOCATION videos from Winter 2011/12. Poems by Paul Chandler/Shy Yeti in this film include: EMPATHY, PEACE OF MIND IN A TEA BAG, ALTERNATIVE ROCK AND ROLL LIFE STYLE and ELEGY AT THE FUNERAL OF A SHOE - PART 1. The poems by John Smallshaw are called TUESDAY and THE OLD MARKET. Thank you for all who came to the show and also to Calum Williamson for filming the events. Music in this film is provided by Luca. The copyright of this film belongs to Paul Chandler and John Smallshaw, 2012.

This second and final part of my visit to Brugge was posted on Youtube last week - but can now be viewed on Vimeo at: http://vimeo.com/34839352

There are plenty more films to come in 2012 - although I don't expect to film any new "location" ones until April. There should be videos from my valentine's appearance on Radio Wey should that happen on the 11th February and also from my show in March; not to mention one further film from my JUNK/FOOD show last November. However there are a number of episodes filmed in 2011 in various locations that have yet to be edited...

The last 3 episodes of YETI HUNT U.S.A., plus one other "secret" episode - although I'm saving this 4th episode for a rainy day. There are also a couple of "lost" episodes from Summer 2011 - including an episode that was meant partly as a Summer special and partly as a celebration of my VAMPIRE COWS OF SCUNTHORPE collection.

There's a new show about to be announced - Friday 16th March 2012. I guess I kind of announced it then; but they'll be a proper announcement on my Facebook group page soon when they'll be more information. One thing I can reveal though is that John Smallshaw will be joining me again on the night and that we'll be holding a collection for The MS Trust. 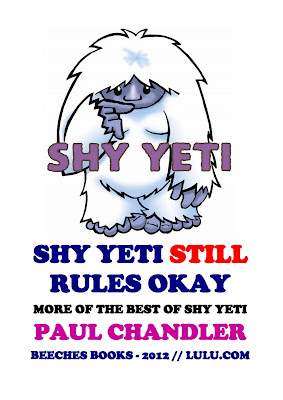 There are going to be a number of new books out this year; a number of them I've been working on for quite some while in the background; but now it's time for them to have their moment. As usual there is a mixture of completely new books and also some re-issues or new compilations. We'll look at the completely new books first. Even though not all of these will be published before the end of the year I will certainly be spending a good deal of time working on them over the next 12 months.

ARE WE THERE, YETI!?

This is my first original collection of 2012 - although I've been working on it since July 2011. You've already seen one or two bits from it on videos and on the blog - but it's now almost finished as far as the writing side is concerned. This collection follows the lead of the last 3 in that it contains more prose than poetry. I am aiming for 100 pieces for this book and am currently typing up the last half dozen or so. After that there's still going to be a lot of formatting and proofing to be done - but hopefully this will be ready by the early summer. I'll guess at May, but we'll see.

NOT AS SHY AS I WAS

This is the follow-up to ARE WE THERE, YETI!? A few shorter pieces that I wrote during December 2011 were kept aside for inclusion in this collection rather than YETI!? - so techinically I have started work on it; however I doubt it will finished until the end of the year. Maybe even early 2012. As with my other recent collections I expect it to be a mixture of poems and prose.

At the moment this is just a provisional title for my first collection of 2012. I'll only start work on this if I finish NOT AS SHY AS I WAS. 2013 is my 40th year and I have other ideas of how I want to celebrate that and another vague idea for a book - but I'd want to have that one out by November 2013. YETI CONFETTI would fill the gap as my Spring/Summer book for 2013 - or might simply be shelved as a title until 2014. We'll see.

These next two are Mouse Of Commons books that I expect to be working on during 2012.

TALES FROM THE MCWHISKERS ARCHIVES

I only really aim to publish one Mouse Of Commons book a year and this is the one that I expect to finish and publish, probably by the Summer. TALES is a collection of short stories that I hand-wrote on holidays between 2007 and 2008 and which have resided in notepads until I caught up with my backlog. There is, at least, one more collection of short stories still to be typed - but those probably won't see the light of day until 2014; although I might type some of those later in 2012 once TALES is published. Once I'm up to date with all those stories that need typing I may even consider writing some more short stories about Gladstone McWhiskers and friends. I'll write a bit more about what's included in TALES nearer it's time of publication - but I can reveal that everything is going pretty well with the proofing and formatting side of this book.

SPLINTERS is the sequel to 2011's COUNTER-CLOCKWISE CONUNDRUM and although I don't expect it to be ready for publishing until sometime in 2013. I'm currently working on Chapter 3 and rather enjoying working on this project. I usually seem to be writing one new Mouse book whilst proofing another - so it's quite odd to be working on 2007 stories whilst also working on this one. Although I have a rough plot outline for this story I am allowing myself to add new ideas and developments whilst I write. It's always fun to not quite know where you're going otherwise the writing process can become rather boring. I like to be able to surprise myself, as it were!

There are a number of anniversary re-issues and a couple of new compilations coming out this year.

This is a new compilation - with a loose theme of "lost love" and covers poems and short stories from 2001-2012. This will be one of the first books out this year - hopefully by my March Poetry Cafe show.

This is the sequel to SHY YETI RULES OKAY and covers poems and stories from my last six books from THE SHY LIFE to ARE WE THERE, YETI!? You'll see some early drafts of the potential front covers for this and the original throughout this post. This compilation will hopefully be ready by May or June, around the same time as ARE WE THERE, YETI!?

This original volume is being re-issued around the same time as the sequel with the same cover branding.

This is a 10th anniversary edition of my second collection and should be out in time for my Poetry Cafe show in March.

This is a 10th anniversary edition of my third collection and should be out by my proposed Poetry Cafe show in November 2012.

This is a 10th anniversary edition of my 4th collection - but isn't due out until Spring 2013, along with re-issues of THE AUTUMNAL E.P. and the other early book that are not currently available as single volumes on www.lulu.com

Next week I'll share something from ARE WE THERE, YETI!? which hasn't previously seen the light of day. The new book isn't due for a while yet - but I don't think that matters! 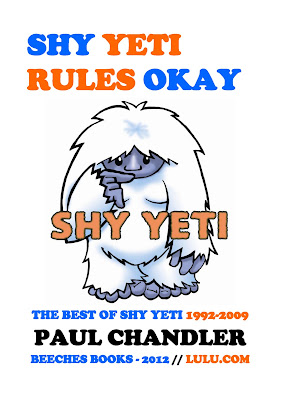