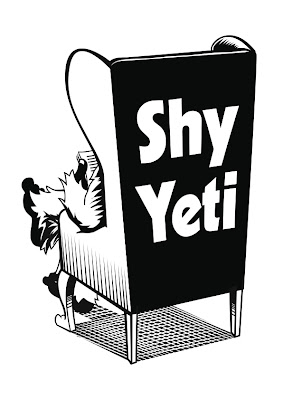 So, what do you think!?! I do hope you like the new logo!

The logo's by Pete Katsiaounis who also did my illustrations for the FUNERAL FOR A SHOE segment of my last collection, which I wrote about on the following blog-entry back in October: http://www.thedaffypoet.blogspot.com/2011_10_23_archive.html

You can read more about Pete and his artwork at: www.inkandmanners.com/

I am also pleased to be able to announce another new SHY YETI ON LOCATION episode. It's the first of two that I filmed back in late October and it's called SHY YETI'S MINI EUROPEAN TOUR 2011 - PART 1: FROM LILLE TO...

Here's a bit more information about it...

Welcome to Shy Yeti's mini European Tour 2011... This is the first part of a two part adventure in time and space... oh, okay... it was actually just filmed in Europe in late October 2011. This episode begins in Lille before heading off to... Well, you'll have to wait and see before I reveal that! Poems include DISCO from the 10th anniversary edition of JUNK/FOOD and performances of EIGHT-LEGGED DISCRIMINATION and YETI SPAGHETTI from my November 2011 Poetry Cafe show. Camera: Paul Chandler and Calum Williamson (who makes a couple of cameos in the episode too!) Music: Luca. This film and its contents are copyright Paul Chandler, 2011. Part 2 follows by new year...

Last, but not least - I present the second of my two Christmas stories; a slightly macabre festive offering called TAKE CARE WHEN GIVING CHRISTMAS PRESENTS...

HAPPY CHRISTMAS YETI FOLK! and thanks for reading the blog this year and for watching the videos. They'll be more from me in the New Year and Part 2 of my mini European tour!

You have to be so careful when you're giving Christmas presents…

I never realised quite how devious people can be; but I learnt the hard way…

When I grudgingly gave my ex-wife a present I had no idea what would happen. All year we'd spent battling in the courts over the divorce and she'd ended up with pretty much everything; including the kids. I’m not quite sure how it ended up that way, as she had left me, still – it did. Anyway… Be reasonable, I thought. It's only a box of chocolates for all she does to look after our kids. Kate seemed surprised - standing there on the doorstep when I took them for the weekend; her new boyfriend there in the hallway behind her, poised to pounce in case of trouble.

“Thank you…” Kate said crisply. “I haven't got anything for you, I’m afraid…”

It was no surprise; but I told her that having time with the kids was enough of a present – that nothing more was required; sickly, I know – but almost true.

Anyway, mission accomplished, I thought. At least I presumed it was so.

Little did I realise then that my present to Kate was opened and discarded and then wrapped again and passed onto her sister. Who did the same and passed it on to her niece, who didn’t like dark chocolate and so wrapped them again and gave them to Auntie Maud who ended up spending Christmas Day at my parent’s house and…

Anyway… It all got very confusing - and unfortunate too.

...And it’s also how in a round-a-bout way that I ended up poisoning my own dear mother, rather than my hated, deceitful bitch of an ex-wife.


TAKE CARE WHEN GIVING CHRISTMAS PRESENTS appears in my next collection ARE WE THERE, YETI!? which is due out in late-Spring 2012. This post and its contents are Copyright Paul Chandler 2011.
Posted by Paul Chandler at Sunday, December 25, 2011