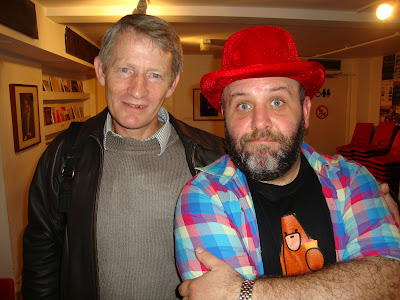 JUNK/FOOD - 10TH ANNIVERSARY GIG!
18th November 2011, Poetry Cafe, London
Hi,
Well - it all went without a hitch and a good night was had by all... Hopefully! Oooh! That was the short review of the night, at least... Wanna know some more? Wanna know loads more? hehe. Okay... Here we go! All you ever wanted to know about last friday's gig, but were afraid to ask... There will be a video, of course - we got a lot of footage, but nothing's up yet... Hopefully by next week!
Okay... First we have the plan of action for the night, followed by what actually occured!

INVITE A YETI ROUND FOR TEA
EXIT PURSUED BY A YETI

THE VAMPIRE COWS OF SCUNTHORPE
GLUE TO MEND A BROKEN HEART

DISCO
THE EUROVISION HERO
THE SORRY TALE OF FRED THE DINOSAUR

SECOND HALF - 8:30pm Shy Yeti continues with a yeti poem

BEE BUSINESS
ARE WE THERE, YETI?


Doors opened at 7pm, with the first half beginning at 7.30. I began with a fair few daft poems for the first 10 minutes or so – with a mixture of old and new pieces. Most of the show was recorded by my flatmate Calum Williamson; doing a good job at short notice when my usual gig cameraman, Dan Hodges, was taken ill.

The evening began with 2 yeti themed pieces – as I usually do, however not DISCO YETI as I’ve done that one quite a bit lately. In fact I began with a completely new one called INVITE A YETI ROUND FOR TEA which is a work in progress from next year’s ARE WE THERE, YETI!? A piece that I filmed on Friday 11th November in Topanga Canyon on my recent L.A. trip. My second piece was EXIT PURSUED BY A YETI, which is from one of my earliest collections – but also appeared in 2009’s SHY YETI RULES OK.

After this I moved on to another couple of recent poems, firstly THE VAMPIRE COWS OF SCUNTHORPE, the title piece from this summer’s collection. I followed this with a very new poem called GLUE TO MEND A BROKEN HEART, which is from ARE WE THERE, YETI!?! Which is also probably one of the newest pieces, along with INVITE A YETI ROUND FOR TEA, that I read all evening.

Twenty minutes in and I moved on to my first few poems from JUNK/FOOD, which was one of the chief reasons that we were there. The pieces I chose were BEST THING SINCE SLICED BREAD, HENS AND STAGS, I AM THE GERMS and I SHOULD NEVER. After this section, it was then time for special guest, John Smallshaw to read – allowing me to sit back for ten minutes or so to enjoy some of his new work; including a particularly daft piece which he claimed to be an alternative history of the world!!! (I think he's right though! It all sounded believeable to me!)

Following John’s spot we were, by this stage, coming towards the end of the first half and I made the decision to add a poem that was from JUNK/FOOD and kind of complimented one of John’s pieces. This was HAIRCUT; not one that I had considered reading – but I used to opportunity to do so using my new Kindle! The way forward for my poetting perhaps – who knows!

After this little diversion I returned to my original plan of reading a poem that John inspired; the title of which is a play on the title of an old David Bowie song. JOHN, I’M ONLY RHYMING is a bit of a moan about how, when I started writing my books, some people seemed to like to take it upon themselves to tell me how I should and shouldn’t write a poem. This is just a call to do whatever the flip you want to! Following this piece I then did my now traditional cover version which I always say is less about the audience actually recognising the song and more about them hopefully agreeing that many song lyrics make decent poems too. On this occasion I performed Lennon and McCartney’s MAXWELL'S SILVER HAMMER, which often gets bad press from Beatles fans, but which I absolutely adored as a teenager (in the 80s, long after it was written) and still do. I think it went down pretty well and certainly fits in with a lot of my more macabre stories of late.

After this section I then returned to JUNK/FOOD for another three poems before the break; these three being a trio of my favourites from this collection: DISCO, THE EUROVISION HERO and THE SORRY TALE OF FRED THE DINOSAUR. After that it was time for a break!

The second half began, twenty or so minutes later after a spot of refreshment, at about 8:30 – and, as ever, I had to begin with a yeti poem. On this occasion chose YETI SPAGHETTI which appears in a couple of my collections; including my 2009 compilation SHY YETI RULES OK. After this I then returned to JUNK/FOOD, reading three pieces that I really like from the book but which I haven’t read live very often, if at all. These pieces were EMPATHY, EIGHT LEGGED DISCRIMINATION and I BELIEVE.

After this selection it was then time to read a few pieces from my new collection, FUNERAL FOR A SHOE which had only been officially released that day. In fact the night was as much to celebrate this collection as it was JUNK/FOOD – although I’m sure I will return to reading more from FUNERAL FOR A SHOE when I do my 10th anniversary show for both my blog and my second collection, ROLLERCOASTER some time in Spring 2012. The pieces that I read were PEACE OF MIND IN A TEA BAG, ALTERNATIVE ROCK AND ROLL LIFESTYLE, DEATH OF A GIRLBAND and ELEGY AT A FUNERAL FOR A SHOE – PART 1 and then after that it was time for John to read again.

By now time was getting on and so having read one of my favourite poems LITTLE PIG (another unscheduled addition to the evening), I moved on to 3 short stories from my THE VAMPIRE COWS OF SCUNTHORPE collection from the summer. The pieces I chose were LEGGY BLONDE, GRANDPA’S WIG and A DAY IN THE LIFE OF A DIVA. Following this I read a couple of pieces from my next (as yet unpublished) collection ARE WE THERE, YETI!?; BEE BUSINESS and the “title track”. This section was finished by a further piece from this collection: NEVER, NEVER, BE FORGOTTEN in memory of June Rutter.

There was just enough time to read a couple more JUNK/FOOD pieces at this point: READY, TEDDY, GO and THE TRUE LIGHT; two of the most performed pieces from the collection. I then wrapped up the evening with some old favourites: MY DOG IN A DRESS, A LEARNING EXPERIENCE, THE TRUE EXTENT OF MY GENIUS and I WILL EAT PIES. And we were done soon after 9.30! A successful evening; at least it certainly seemed to be!

I’d just like to thank all those who came along – especially Paul Hillier who came down from the Derby-area; but also to Glyn, Harry, Mauro, Gareth, Andrew, Tom, Vinnie and any who I may have forgotten or didn't know the name of… Once again I’d also like to give a big thank you to Calum Williamson for filming, to John Smallshaw for performing – and also to Julie Howell to introducing me to John in the first place! 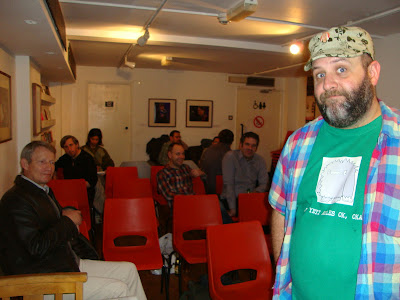 PS I am currently working on the first video for the night, as well as Part 4 of YETI HUNT USA, but to tide you over here is a link to a new poem that I've just loaded on Soundcloud: DIAGONAL CAT:  http://soundcloud.com/shyyeti/diagonal-cat

PPS Thanks to everyone for taking photos on the night. I took some. Glyn took the two below. I can't remember who took the two above. Maybe my friend Paul or Calum or Harry! Well, thank you to all of you anyway! 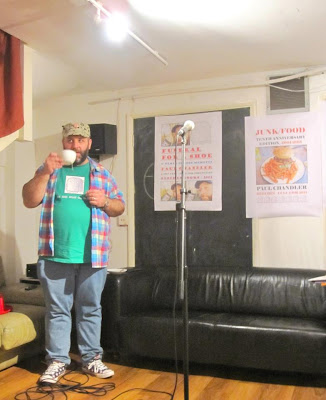 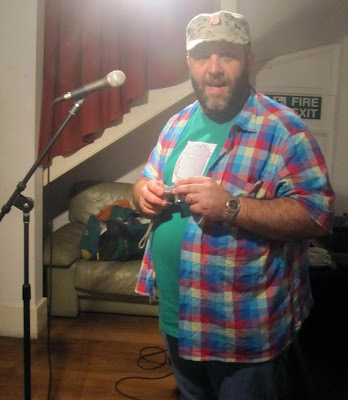 All contents of this post are Copyright Paul Chandler, 2011.
Posted by Paul Chandler at Thursday, November 24, 2011