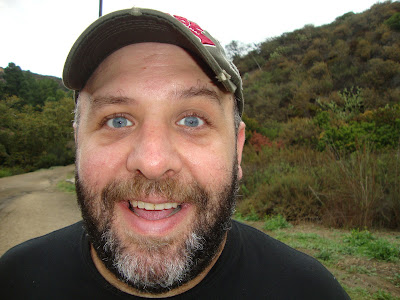 FUNERAL FOR A SHOE IS LAUNCHED - GIG THIS FRIDAY!
Hello!

Yes... I'm back safely from my L.A. trip... As you may or may not recall I did a post last week about what I got up to during that trip; although there was one last filming session before I flew home. As I didn't fly out until Saturday evening there was time for Dominic and I to pop to Griffith Park for one last trip and it turned out to be one of my favourite visits. 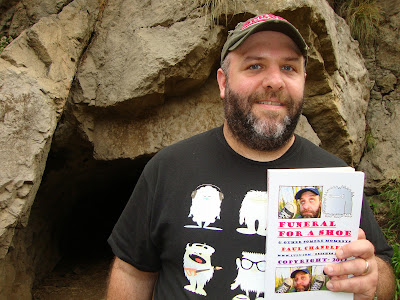 I had read on the internet that there was an area of Griffith Park where they had filmed the entrance to the bat cave for the 1960s version of TVs Batman; it had also been used for a number of other films and finding myself with a bit of time I decided that it would be the ideal location to head for. As it happened it was very close to the CAMP HOLLYWOOD car park where we'd walked back in the summer - on the day that I had taken photos of the cactus heart which inspired my poem of the same name. It wasn't hard to find the batcave - just taking the only other track in that area gently uphill overlooking a small park where I did a little yeti dance back in August and also took the much used photo of me camping it up in front of a sign that reads "CAUTION RATTLESNAKES!"... (This photo appears on the new cover for WOOED AWAKENINGS that appeared in last week's blog!) 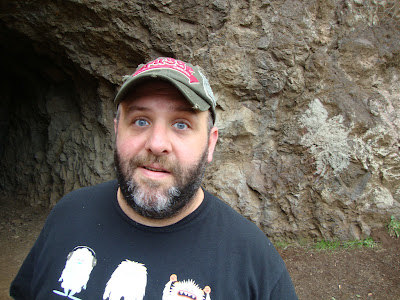 Anyway - on the way up to the bat cave I finished reading a poem that I'd begun the afternoon before back in Topanga Canyon and I also decided to read a short story that I'd written just that morning which is entitled A YETI HISTORY LESSON OF HOLLYWOOD. The batcave location was so good and I got so much footage filmed, including out-takes, yeti dances and comments about the cave belonging to yeti that I decided that there would be enough footage to make a special episode separate from my YETI HUNT USA series. Knowing that I probably won't return to L.A. for a while I thought it might be nice to keep this episode until the Spring when I can realise it nearer the time that my ARE WE THERE, YETI!?! book is complete. There were quite a lot of mistakes during the reading of the story, as I was working from a hand-written first draft - although I think that managing to fluff lines up so much probably makes for a more amusing and watchable episode all in all. Anyway... So this episode won't appear for a while yet - but it's nice to think that they'll be a nice Hollywood episode for 2012 as ARE WE THERE, YETI!?! is such a U.S. based collection. 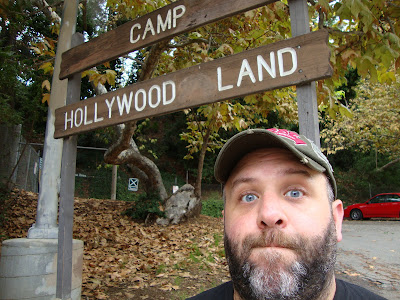 Moving on I am very pleased to announce that FUNERAL FOR A SHOE is now available to buy from Lulu.com... Let me tell you some more and give you a few links just in case you'd like to purchase a copy!

There is also an edition available in hardback which costs £16.99 and can be accessed at this link: 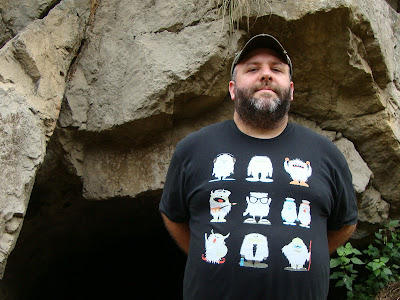 FUNERAL FOR A SHOE is made up of almost 100 pieces - poems, scripts, short stories - allsorts really! That said, this book is a lot more about prose - ranging from short stories on just one page to longer pieces; there are a good dozen or so poems, however - so never fear! The book also includes the usual behind the scenes information on each piece as well as links to films and goodness knows what else! There's even a diary taken from blog entries during the time covered by the writing of the collection. Anyway - back to the actual poetry/prose... Some of the titles you may be familiar with from my Youtube/Vimeo videos - such as THE TRUE EXTENT OF MY GENIUS, DEATH OF A GIRL BAND, A PERFECT MATCH, LOVE-GO-ROUND, or "MOTHER, MEET PARIS..." - but most will be completely new to you. I won't list the titles again as I did so in a previous post, which you can check out at: http://thedaffypoet.blogspot.com/2011_08_28_archive.html So there!! ;) 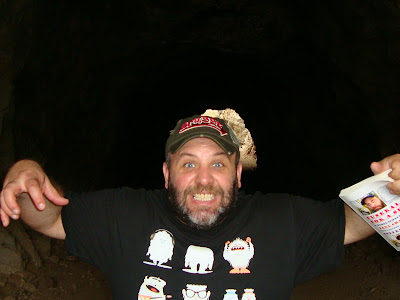 Lastly, before I go I would just like to mention that my 10th anniversary JUNK/FOOD show takes place this Friday... (Very soon!) I have all my readings selected and prepared and am very excited to be able to confirm that the excellent John Smallshaw will be reading too on the night... Eagle-eyed readers may remember that John also joined me during my AN EVENING WITH SHY YETI AND OTHER ANIMALS show back in the Summer. Well, he's back and it sounds like he has a good deal of interesting new material to share with us!

If you weren't there in June at the show and haven't had a chance to watch the videos from the night on youtube or vimeo... (Quite frankly, why not!? Go do so now... They've been up since June, you lazy, lazy X-Factor time-wasting people! Ahem... Sorry, I had a moment there! Who said that!?!) Where was I!? Oh yes, if you weren't there at the show and you haven't seen the videos then you can read more about John on his website...

As mentioned before you can also watch him perform on two of my poetry videos from earlier in the year...

AN EVENING WITH SHY YETI AND OTHER ANIMALS

There's also a video called ANOTHER EVENING WITH SHY YETI AND OTHER ANIMALS which John also appears in and which you can find on either of my profiles - but you'll come across that when you click on the previous link, no doubt... Oh... Here it is; go on... Don't say I'm not nice to you! ;)

Anyway - that's quite enough about the show, except to say that kick off is 7.30 at The Poetry Cafe on Friday 18th November!! Next week's post will be all about the evening, so they'll be a lot more about the evening then... 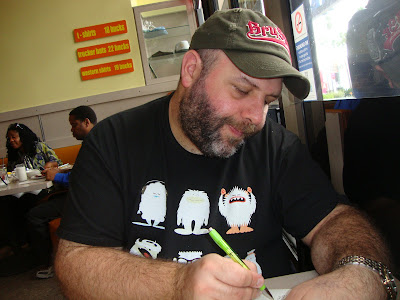 There's lots more happening before the end of the year - I'll be writing about upcoming episodes of YETI HUNT USA, maybe posting one or two pieces from FUNERAL FOR A SHOE and I'll also be back on Radio Wey at the start of December!

Here's hoping to see some of you at the Poetry Cafe show on Friday! :) 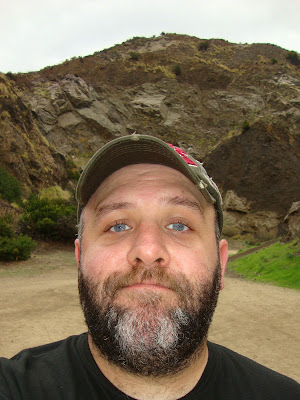 All contents of this post are Copyright Paul Chandler 2011. Thanks to Dominic McCauley for taking many of the photos during the trip.
Posted by Paul Chandler at Wednesday, November 16, 2011