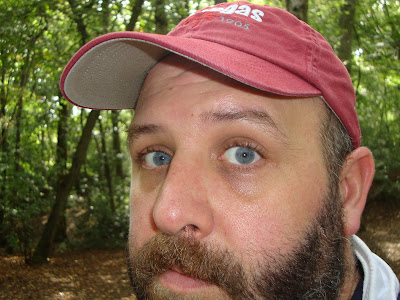 Not a long post this week - I'm heading off to Lille this weekend to film some more videos; well - at least I hope I am. With a bit of luck I'll end up with enough footage for at least one episode! Maybe two!! Hopefully a second one will be from either Brugge or Ghent; depending where I'm able to get to on my day out on the Saturday. They'll be a lot more about the trip, next week and over the next few months - although it may not see the light of day until nearer Christmas. 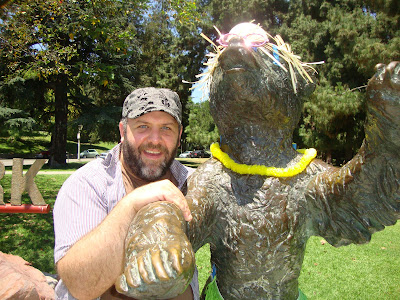 Talking of videos, a new one was published just last weekend... I've been having a lot of problems with editing, lately - although I'm not completely sure where the problem lies. You'll remember that I had a lot of difficulty with the episodes that I film in The Isle of Wight, necessitating me to post more frequent yet shorter episodes. The new series is called YETI HUNT U.S.A. and will probably be my longest yet - the first 4 or 5 episodes (depending on how many episodes the footage stretches to!) were filmed during my summer trip to L.A. and Portland, with a further possible three to be filmed when I return there in November.

The first episode: L.A. AWAY-HAY! is already up at the following link... Here's the details...

L.A. AWAY-HAY! is the first episode of a new SHY YETI ON LOCATION series - YETI HUNT U.S.A., which returns us to the U.S.A. on the hunt for Shy Yeti's yeti relatives... We begin our hunt in L.A. once again - but we will be moving to a few other locations during this series. At time of posting I'm not sure how long this series will run for - several episodes were recorded back in August 2011 - with further ones still yet to be filmed during November 2011... We'll just have to see how the hunt pans out! Along with the usual daftness, this episode features some rather nice scenery - not to mention two poems - COMING INTO LAND - a piece that was read at The Cobalt Cafe during the trip and another - ARE WE THERE, YETI!? from a forthcoming collection. Both are pretty new pieces... This episode also stars my faithful sidekick Dominic McCauley who also helped me film the episode. Music is by Luca. This film is Copyright Paul Chandler, 2011.

As of yesterday Part 2 is also now edited; I had a lot of trouble with both episodes; but it would appear that it may just have been a case of too many fancy fades and transitions between shots! Here are the details - with the way things are currently going, expect PART 3 next week!

THE HILLS ARE ALIVE WITH THE SOUND OF YETI is the second episode of a new SHY YETI ON LOCATION series - YETI HUNT U.S.A... Along with the usual daftness, this episode features some rather nice scenery - not to mention a new yeti dance and an old poem called PIE CRIMES. It co-stars Dominic McCauley who also helped me film the episode. Music is by Luca. This film is Copyright Paul Chandler, 2011.

What I'm really here to announce is the release of the 10th anniversary edition of JUNK/FOOD. I could have waited until next week to launch it - but I've received my finished copies and very good they look too! If you end up owning a copy I hope you enjoy it!

Published in late 2001, JUNK/FOOD was Paul’s first self-published collection. Long before he became Shy Yeti he was just plain Paul – but what hasn’t changed is that even then he was writing daft verse. Until now JUNK/FOOD has only been available alongside its sister collection ROLLERCOASTER (re-issued during 2012) so this is the first time it has stood on its ownsome. This version is a special 10th anniversary edition containing photos, updated information and all sorts about how the book came to be written. JUNK/FOOD contains a number of poems that Paul still performs today such as THE TRUE LIGHT, THE SORRY TALE OF FRED THE DINOSAUR, READY-TEDDY-GO and DISCO – but many that he never has! If you want to know how all this yeti poetting business first began - then this is the book for you!!!

That's it for now!

P.S. Here's a little something from JUNK/FOOD to end on...

BALLAD OF AN ALRIGHT BLOKE…

Oh! I wish I could say it, I wish I could shout,
But being polite is what I’m about...
I try to get angry - I try to get cross,
‘Bout the state of the world or the size of Kate Moss!
But I’m too TOO mild mannered,
I’m too nice a guy –
To face up to bigots - to spit in their eye!
I cannot face anger - I cannot face strife!
There are sillier things I can do with my life!

I'd rather be dancing - dressed up as a sheep!
I’d rather go jogging - at night - in my sleep!
I’d rather sing sonnets - make up every word!
I’d rather do something completely absurd!
But I don’t do these things - because people might say,
“What’s up with him? Is he feeling okay?”
I don’t go out boozing - don’t smoke hard or curse,
I’m ordinary - average - AND getting worse!
Perhaps you will judge me - for lacking the gall,
To stray from my routine - I don’t change at all!
But perhaps if I try hard - perhaps I CAN change,
I must try something new - something diff’rent or strange!
I’ll cut all my hair off - or wear spiky shoes,
I’ll impregnate princesses – or I’ll make headline news!
I mean it I tell you - this isn’t a joke...
No more Mister nice guy - the all round top bloke...

BALLAD OF AN ALRIGHT BLOKE was written in September 2000 before I decided to start writing poetry on a more regular basis. It was included in my first collection JUNK/FOOD which contains many poems that I wrote between early 1992 and late 2001. It is available in a special 10th anniversary edition, in paperback, hardback and download from http://www.lulu.com/ NOW!!!

BALLAD OF AN ALRIGHT BLOKE and all contents of this post are Copyright Paul Chandler 2011.
Posted by Paul Chandler at Thursday, October 20, 2011