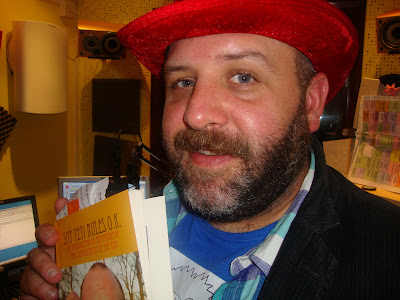 FIVE NEW VIDEOS AND A TRIP TO RADIO WEY!!
Hi,

This week I have news about a couple of things in the yeti world; one concerns my trip to Radio Wey on Saturday 8th October and the other is that there are five new videos on Youtube and Vimeo for your delectation. I think we'll start with those...

The reason that there are five videos is that 4 of them are very short and are what would have been my SHY YETI ON LOCATION - ISLE OF YETI episode which I recorded on The Isle of Wight between the 11th and 12th August, this year. I've been having a lot of problem with the footage/Windows Movie Maker - I'm not sure which was the problem exactly; but anyway - the only way I could get any of the footage to you was by making the films very short. Basically, there are two 100-word stories, a poem and a yeti dance. The last video is of my trip to Radio Wey - more of which later. Let's start with the short videos; as it is I rather like that I am able to have a few 1 and 2 minute videos on my profile - in a way I hope that they might be more of an encouraging prospect to those who have never watched my films and might be put off by a ten minute episode... 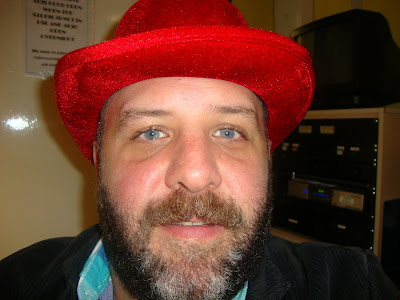 The first video is called TOO LATE...

TOO LATE is a short story written by me, Paul Chandler - sometimes known as Shy Yeti, way back in 1994. It was recorded in August 2011 on The Isle Of Wight and was meant for inclusion in a rather more scenic episode of SHY YETI ON LOCATION which I've had a lot of trouble editing so far this autumn. In the end I have decided to release it - and some of the other footage separately... It's from my recent collection THE VAMPIRE COWS OF SCUNTHORPE, which contains poems and a number of 100-word stories; including this one. It's available from www.lulu.com. This film is Copyright Paul Chandler, 2011. This video is only 59 seconds long and can be viewed at the following links:
YOUTUBE:  http://youtu.be/hIU13E7FEHk
VIMEO:       http://vimeo.com/30245703

The second video is called A DEVIL WITHOUT HORNS...

A DEVIL WITHOUT HORNS is a poem from THE VAMPIRE COWS OF SCUNTHORPE, filmed on The Isle of Wight during August 2011. The video is 2 minutes and 3 seconds long and can be viewed at the following links:

The third video is called SOMETHING TO CHEW ON...

SOMETHING TO CHEW ON is a short story from THE VAMPIRE COWS OF SCUNTHORPE, filmed on The Isle of Wight during August 2011. The video is 1 minute, 4 seconds long and can be viewed at the following links:

YETI DANCE-A-GO-GO is the yeti dance that was recorded in the Isle of Wight - intended for inclusion in the original ISLE OF YETI. It also includes a little bit about the history of yeti on this particular island. All of the previous videos in this series were filmed by myself, but this one includes music by Luca and camerawork by Calum Williamson. I am capable of filming my own yeti dances - it's been done before - but it helps to have somebody there to hold the camera. The video comes to 2 minutes and 3 seconds and can be viewed at the following links:

Next up! My recent return to RADIO WEY on Saturday 8th October. It was my 4th visit, if my memory is correct - my first since November 2008 and it's almost ten years since my first visit back in November 2001.

Whilst there I read 4 pieces - most of them familiar to readers from my shows; the three poems appearing in my SHY YETI RULES OK collection from 2009 and the short story from THE VAMPIRE COWS OF SCUNTHORPE.

The poems were: DISCO YETI, THE TRUE LIGHT and LITTLE PIG (read last of all to end on a humorous note!) and the story was THE NEXT TRAIN DOES NOT STOP AT THIS STATION. THE TRUE LIGHT, of course - was fresh from celebrating its 10th anniversary! The theme on the night was initially Harry Potter but moved onto writing and self-publishing. I also read a few poems (one a famous war poem from world war one) and a couple that readers themselves had written. It all went very well and I was lucky enough to be able to video all of my pieces, bar LITTLE PIG.

Here's a bit more about the video - which is already posted on Youtube and Vimeo...

A YETI ON RADIO WEY

This is me on Tim Mitchell's Radio Wey show on the evening of Saturday 8th October 2011, nearly 10 years since my first visit there, We talk a bit about my writing - but I also read my poems, DISCO YETI and THE TRUE LIGHT, as well as a short story from my VAMPIRE COWS OF SCUNTHORPE collection called THE NEXT TRAIN... I also wear a couple of interesting hats. On the night I also read out some listener's favourite poems and read another piece: LITTLE PIG, but these weren't recorded. The Copyright of this piece belongs to those appearing in it, 2011. The video is 11 minutes, 14 Seconds long.

Well, I think that's about it for now. There are a few photos at the end of this post from my trip to Radio Wey; hopefully I'll be back there in December to read some Christmas poems! Thanks to Tim Mitchell once again for inviting me back on his show and for helping take some of these photos too.

Next week I'll be telling you more about my trip to Lille and some news about not just one new book due for publication - but two!! All an exclusive reveal of one of a number of awesome new illustrations that will be appearing in FUNERAL FOR A SHOE...

Enjoy the videos - more from me soon!! 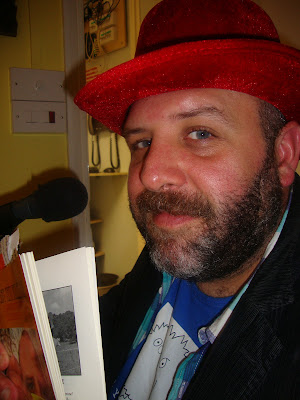 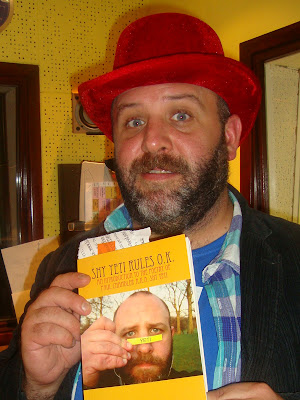 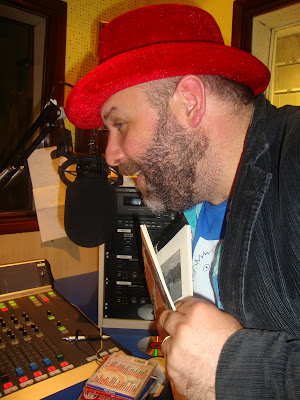 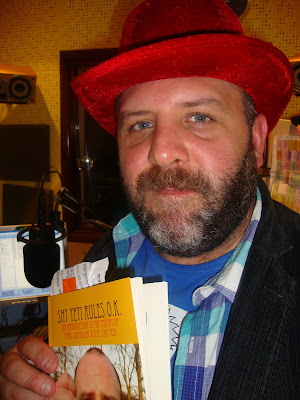