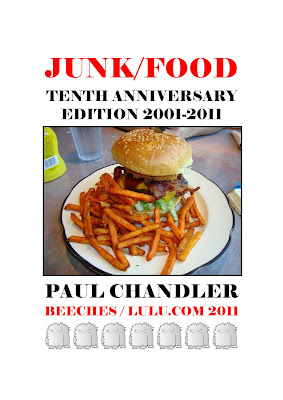 I've decided to try and make Friday my regular day for posting something on the blog; aside for any other special occasions that might occur throughout the year. This week I'm going to mention my JUNK/FOOD re-issue; although only briefly! It's due out on the 1st November 2011 and I should be reading from it during my Poetry Cafe show on Friday 18th November 2011, along with stuff from THE VAMPIRE COWS OF SCUNTHORPE, FUNERAL FOR A SHOE and ARE WE THERE, YETI? JUNK/FOOD is a bit of a mixed bag - including poems that I wrote back in 1992, a couple from the later 90s - but with the majority of them from autumn 2001. This is the first time that the book has been available as a separate entity on http://www.lulu.com/ - it was previously available as a budget compilation with my second collection, ROLLERCOASTER, which is due to be re-issued in 2012. JUNK/FOOD began it's life as a self-published, hand-bound edition in late 2001 - but this edition includes new photos and commentary not available in the original edition. It's 96 pages long and will probably be about £5.99, but this is to be confirmed.

This post I intend to include one of the poems from JUNK/FOOD - I SHOULD NEVER, which I still perform to this day. I am also including the behind the scenes thoughts on it - from 2001 and more recently; ten years on.

That's all for now - there's lots more to be said, but I'll leave that to next time.

One thing I can reveal is that October should see my return to Hospital Radio after nearly 3 years!

I SHOULD NEVER - BEHIND THE SCENES

This one is from 1999 or thereabouts and one that made me smile when I first wrote it - especially the bits about the toupee and the snake! Here I found a situation where the rhymes just came together deliciously easily! This poem changed shape from fat to thin during the revision process! Oh dear – you probably shouldn’t ask!

This is another piece that I continue to perform to this day and one of the earliest poems that appears in my SHY YETI RULES OK compilation from 2009. It’s a very silly piece indeed – but one that I still enjoy performing whenever I get the chance.


I SHOULD NEVER... is Copyright Paul Chandler 2011 and appears in his tenth anniversary re-issue of his first collection JUNK/FOOD, which is due out at the start of November 2011.
Posted by Paul Chandler at Friday, September 23, 2011