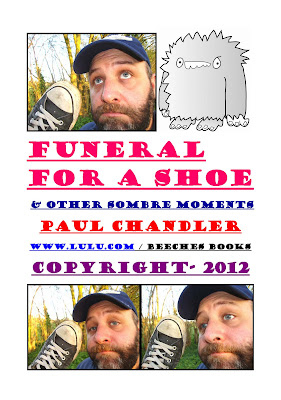 A NEW COVER, SOME NEWS AND YETI RATINGS!!
Hi,

First up; what do you think of the cover? It's near enough what I'm hoping will be the front cover of FUNERAL FOR A SHOE... I am currently very busy with the final proofing work of this book and in my next post I may well tell you about the illustrator that I've been working with during this project... But it's all rather top secret at the moment! Anyway, enough about that for now...
Next I'm afraid I have a bit of bad news...

I was hoping to launch A YETI ON THE ISLE OF WIGHT this week - which contains a poem and two stories from THE VAMPIRE COWS OF SCUNTHORPE collection; but unfortunately the project has become corrupted and I'm going to have to start again next week. Never fear! The footage still exists and is fine - it was just the copy that I was working on, editing etc. that has the problems. I also have a the first few episode of YETI HUNT U.S.A. to edit, a VAMPIRE COWS special and another episode of bits and pieces to work on over the Winter. All this and possibly futher episodes from the States - and two European cities!! I really do need to get my editing skates on... No more glitches please, Windows Movies Maker - or else!!

Anyway - onto other things! I've not done an update on my Youtube and Vimeo films for a while; it's probably only of interest to me, but here we go...

I'm glad to say that since I last studied the ratings back in mid-May the ratings on Vimeo have been improving! This is very good to learn; because love them or hate them they do take me a very long time to put together and of late I've been having trouble with the software - so they're taking even longer! SUTTON PARK continues to do well with all 7 completed episodes in the Top 20. There will be more episodes soon - a number are already in the can and it's the 20th anniversary coming up next year! The Hollywood episodes are suddenly starting to make a dent in the top 20 - as are some of my earlier episodes that have been around for over 18 months now. It's also pleasing to see one or two of this year's films already in the Top 20.

Oh boy, you can tell I still check the UK Top 40 every Sunday, can't you?

Anyway... Go on! Make a yeti very happy and watch a couple of my films that you've never watched! Watch them all and I'll take you out for a coffee and a danish pastry! :)

Please note: All videos can be found on my SHYYETI Vimeo profile and all videos from 2010 onwards on my MRSHYYETI Youtube profile.
Posted by Paul Chandler at Friday, September 16, 2011