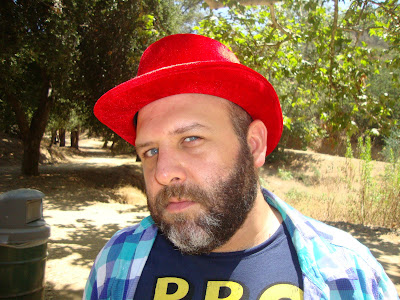 A HAPPY RETURN TO THE COBALT CAFE - TUESDAY 2ND AUGUST 2011

Some of you may know - some of you may not, that I have just returned from two highly enjoyable weeks back in the States. I was over there for a couple of weeks - exploring more of L.A. with Mr Dominic McCauley (the John Steed to my Emma Peel) and also paying a trip to Portland, Oregon http://en.wikipedia.org/wiki/Portland,_Oregon along the way.  Not only did I manage to write a couple of poems and a good few stories - but I also managed to film 2 or 3 new episodes of SHY YETI ON LOCATION, the first of these will hopefully be edited before the end of the month. I am currently at the proofreading stage of my next collection FUNERAL FOR A SHOE, but the stories that I have been writing since late July will appear in the collection after this, which is entitled ARE WE THERE, YETI? and will focus quite heavily on my summer trip and my return trip to L.A. in November. But more of that in future posts...

In addition to all this activity I was also invited to be the visiting poet for the night at The Cobalt Cafe in Los Angeles (Canoga Park, CA to be precise!), on my return from Portland, as you can see from the nifty poster below... 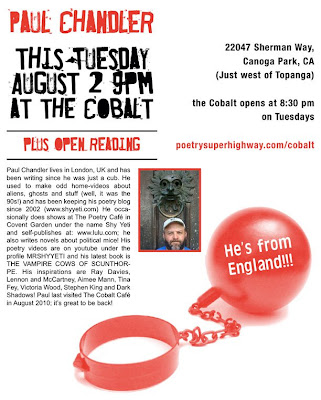 Some of you may remember that I read open-mike at the Cobalt Cafe last summer - for those who don't, but who are interested, I posted a video from my 2010 visit on youtube last year at: http://youtu.be/he0CQVgN_RE

Not to forget my SHY YETI IN HOLLYWOOD episode which includes an additional poem from that night: http://youtu.be/07Ay2pMvE4k

Returning to the here and now, it was a wonderful privilege to be invited to be The Cobalt Cafe's featured poet on the 2nd August. This slot allows more than double the time given to those reading open-mike and so I was able to read more of a mix of rhyme and prose during my twenty minutes.

For those of you who are interested I read the following poems - all making their U.S. live debuts here, although a couple of them have been recorded on location for previous SHY YETI ON LOCATION episodes... Anyway, these are the ones performed on the night.

DISCO YETI
THE TRUE EXTENT OF MY GENIUS
PICCADILLY CIRCUS
LAS VEGAS LIPS
COMING INTO LAND
GEOGRAPHY BE DAMNED
TAKEN
THE SORRY TALE OF FRED THE DINOSAUR
IF SHAKESPEARE WERE AROUND TODAY
WE WERE GOING TO BE WED (WHEN WE BOTH HIT 40!)

In a little more detail...

This piece dates from 2007 and is included in my RHYMES BEARS STEAL PIES FOR collection as well as 2009s SHY YETI RULES OK compilation. It's one of those pieces that I often read first as I usually read one that name-checks a yeti at the start of my shows.

One of my newest pieces - completed in mid-June 2011 and due for inclusion in my next book FUNERAL FOR A SHOE which I hope to be ready by late January 2012. It seems to be one that people like, having received a good reaction during our AN EVENING WITH SHY YETI (AND OTHER ANIMALS) show back in June. It also appears in the video A YETI IN PARIS - PART 1 http://youtu.be/VJIoPk5WFeU

This is a quite early piece from 2002, originally from my ROLLERCOASTER collection - but also compiled in 2009s SHY YETI RULES OK book. I haven't read it a great deal lately - but it seemed to fit well as this was one of my poems from the night that I read to show my British roots!

This seemed an obvious piece to read as it namechecks a U.S. city not so very far from Los Angeles. In fact I made a video for it having made my 3rd visit to Las Vegas back in December 2010. You can watch it in the SHY YETI ON LOCATION episode - A YETI BACK IN HOLLYWOOD - PART 2 at:http://youtu.be/fF4OlsOeqTY  It can be found in my SHY YETI RULES OK (2009), but was originally included in POEMS TO MAKE BEARS GROWL from 2006.

This is a piece that I began writing in 2010 during my first trip to L.A., although it wasn't completed until 2011 and was included in my recent THE VAMPIRE COWS OF SCUNTHORPE collection. As I didn't have enough spare copies of this book ready to sell it was my YETI HUGS AND OTHER HORRORS collection, from earlier in the year, that I ended up promoting on the night. I introduced this piece as being the first of two poems about long distance relationships.

This was the 2nd of the two long-distance relationship poems that I read on the night. This is from 2010s YETI HUGS AND OTHER HORRORS and I previously read it in Topanga Canyon in December 2010, during my second video - for inclusion in Part 2 of my A YETI BACK IN HOLLYWOOD series. (See link from LAS VEGAS LIPS above...)

This piece was originally from my THIRD TIME LUCKY collection from 2002, but was also revived for inclusion in SHY YETI RULES OK in 2009. It is not a piece that I have read very often - if at all, I'm not too sure now! My poor yeti memory! This is why I have to do such indepth blogs and fact-files in my books, as I'll never remember in 6 months time! TAKEN was one of my more prose-y pieces that I chose to read on the evening to (hopefully) show the range of my work.

THE SORRY TALE OF FRED THE DINOSAUR

This was the earliest piece that I read on the night - from my first collection JUNK/FOOD from 2001, although the actual poem itself was written back in 1992. It is also included in my SHY YETI RULES OK collection (2009).

IF SHAKESPEARE WERE AROUND TODAY

This is a another piece from my recent THE VAMPIRE COWS OF SCUNTHORPE from July 2011 and it made only it's second live performance here, having been debuted as my Poetry Cafe show back in March 2011. I chose it partly because it namechecked a great British icon - and partly because it also attempts to take the mickey out of the aforementioned icon; although I still maintain that this is exactly the way that Shakespeare would be treated if he showed up today!

The last piece read on the evening was from my IF POEMS WERE PIES collection from 2009, although it also appeared in my SHY YETI RULES OK compilation from the same year. It is one that I have read towards the end of the night for a while and is my poem of choice to end with if I'm not reading I WILL EAT PIES, which I choose not to on this occasion. It's a bit too weird perhaps for an audience not used to my strange yeti ways! ;)

This was one of the few opportunities that I've had to highlight the range of poems that I have written in the last *almost* 20 years from THE TALE OF FRED THE DINOSAUR in 1992 to the very recent THE TRUE EXTENT OF MY GENIUS from June 2011 - and so I was very pleased to be able to do so...

As a matter of completion, here are the other poems that were considered for the night! Yes, I didn't just show up unplanned, you know - Dominic actually timed me earlier in the day and I read a number of these other poems before deciding on the final line-up. Those poems that did not make it at the final hurdle - but which were practiced on the day and considered include: THE BEST THING SINCE SLICED BREAD, HOPELESS ROMANTIC, BACK THEN, JUST TO GET MYSELF TO YOU, IF YOU WERE MY WIFE, OPEN-MIKE NIGHT OF THE LIVING DEAD and WE'RE AN ITEM NOW. Finally, others considered and rejected before I left the U.K. include ALL GIVE - NO TAKE, THE GREAT BOOKSHOP IN THE SKY, THE KING OF RHYME, OTHERWISE ENGAGED, YOU - ME AND THE HOLLYWOOD HILLS, RECKLESSLY, WAVES, THE CUTEST GUY IN THE BAND, I KNOW HIM, NO-ONE EVER FELT COOL BUYING AN MP3, PHOTOS ON FACEBOOK, RESPECTABLE TEXTS, WAITING FOR GHOSTS and A SWEET TAIL.

I am pleased to announce that there is also a video from the show, SHY YETI - RETURNS TO THE COBALT CAFE!! which has just gone up on Youtube and Vimeo at the following links:

Dominic recorded all 10 of the poems and this particular video contains 7 of the 10 poems that I read on the night and comes to a little under 14 minutes in length. I have kept back the other three poems for inclusion in my new SHY YETI ON LOCATION series YETI HUNT U.S.A.; the first episode of which should be available before the end of the month.

I'd just like to give a big thanks to Rick Lupert for inviting me to read at quite short notice when he heard that I was coming over, to Dominic for recording the poems - to my friends Patrick and Julia for coming along to watch, support and applaud me on the night (not to mention feeding me with an awesome dinner a couple of nights before!) I would also like to thank all those in the audience; some that I spoke with and some that I didn't, for their warm welcome. Thanks especially to those who either bought my "broadsheet" which included my poem A LEARNING EXPERIENCE or my SHY YETI RULES OK or YETI HUGS AND OTHER HORRORS collections, which I brought over with me for the night. 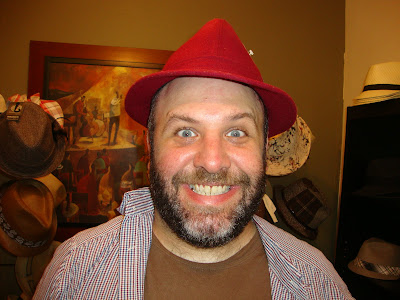