AN EVENING WITH SHY YETI (AND OTHER ANIMALS…)
POETRY CAFÉ, THURSDAY 16th JUNE 2011


Well, this was definitely my biggest show yet - with press releases, charity themes, videos - extra special guests and even mentions in the London press: http://londonist.com/2011/06/book-grocer-15-21-june.php

In case the link eventually ceases to work we were billed as: "Paul Chandler, John Smallshaw, Gary Groves and Wilfredo spend the evening with a shy yeti and other animals, at the Poetry Cafe (8pm)."

The guests were, as follows:

Star of BBC Radio 4's Arthur Smith's Balham Bash and the subject of a soon-to-be released documentary about his life ('A Fish Called Pythagoras').

Notoriously reclusive; this is his live London debut.

The boy from Granada who has become the darling of the British festival scene. Fresh from sell out performances at the Brighton Festival Fringe and London's Leicester Square Theatre. He will be performing at the Underbelly throughout the Edinburgh Festival Fringe.

As far as Mr Yeti was concerned I got to be the host for the night AND read more than a dozen of my poems. A number of poems by the other performers were recorded by my cameraman: Dan Hodges - and all of my pieces were recorded in full, except for OH FLORENCE!!!

In the end the evening went as follows:

We began with Julie's introduction to the night and also a short discussion on the charity before moving onto my first few poems, which were as follows:

I started off with three of my more familiar poems - ones that I usually read at shows which I collected in my SHY YETI RULES OK compilation from 2009. BECOMING MORE CAT-LIKE is one of my most recent poems from YETI HUGS AND OTHER HORRORS which I have performed three times, so far, this year - and also included in my SHY YETI BACK IN HOLLYWOOD series.

Following these poems there were some awesome poems by John Smallshaw. More on these when we get around to posting a video from the night. It was then time for me to read a few mine of my own poems and to talk a little about the charity...

LOVE-GO ROUND
THE TRUE EXTENT OF MY GENIUS
OH, FLORENCE!!!

The first two poems here were very new and received their live debut; both of them are from my forthcoming FUNERAL FOR A SHOE collection of poems and prose that I don't expect to be published until next year. OH, FLORENCE!!! is an oldie and one of my favourites and can be found in my SHY YETI RULES OK compilation.

Following this section we had Gary Groves debut on the London scene which was really well received - before we broke for a 20 minute break.

Returning after the break - I read a couple of animal poems building up to the piece that I had been commissioned to write for the evening (of which there is a specially recorded video on youtube...)

LITTLE PIG and MY DOG IN A DRESS are, of course - old pieces which can be found in SHY YETI RULES OK. IF YOU WERE MY WIFE is a new one from THE VAMPIRE COWS OF SCUNTHORPE which has received a number of performances this year - whilst A PERFECT MATCH was the sketch that was especially commissioned for the night - which will eventually find its way into my FUNERAL FOR A SHOE collection next year.

There was also a video made before the night of A PERFECT MATCH: http://youtu.be/rJqJ5cukaJk filmed on location in Central London on Tuesday 14th June 2011 and posted up the following day to help attract interest in the night and the charity.

After my appearance we then had more from the fabulous John Smallshaw and then a whole lot of craziness from Wilfredo which had the audience in a near state of knicker-wetting hysteria! You think I jest! But no... Wilfredo has that affect on people... In a good way... If that's possible! ;) After Wilfredo I returned for my last four poems and a bit of plugging for YETI HUGS AND OTHER HORRORS and my forthcoming THE VAMPIRE COWS OF SCUNTHORPE collection.

FREE COFFEE is a new piece which received it's live debut here - but which won't see the light of day until 2012 for FUNERAL FOR A SHOE collection. A LITTLE MOUSE is from my YETI HUGS AND OTHER HORRORS book from earlier this year; whilst OLD ENOUGH TO KNOW BETTER is one that I've recently rediscovered from my 2009 collection IF POEMS WERE PIES. I had never performed it live, but really wanted to - and so I did! I WILL EAT PIES is my usual end of show piece - which can  located in my SHY YETI RULES OK compilation, also from 2009.

I was really pleased to have time to fit in 15 poems on the night - the only other two poems that I had considered reading were THE SORRY TALE OF FRED THE DINOSAUR and THINGS AIN'T WHAT THEY USED TO BE - PT 1... but I decided to debut a few newer poems instead.

I am currently working on a video of John, Gary and I - but more about that next time...

Thank you to all who came along and supported the charity - to Calum, Harry, Glyn, Dan, Robert, Tom, Vinnie and the other dozen or so people who I didn't get a chance to meet personally on the night...

Also a very big thank you to all those who could not attend and donated from afar - to Dominic, Stacy, Lorraine, Aidan, my mum and dad, Amber, Erik, Anita, Charlotte, Yvette...

I would also like to say another thank you to John Smallshaw, Gary Groves and Wilfredo for making the night so special - and for Julie Howell for making it all possible! It would appear the the total so far for the charity is £162.10, but a number of people are yet to donate - so that total could still go up. The online donation page is still active and can be accessed at: http://www.justgiving.com/itgoeson

I'll be posting again in a day or two about my recent soundcloud posts and the unfortunate delay with the first episode of the new SHY YETI IN PARIS series (never fear, after a hiccup it is on its way!); all that - not to mention the publication of THE VAMPIRE COWS OF SCUNTHORPE… 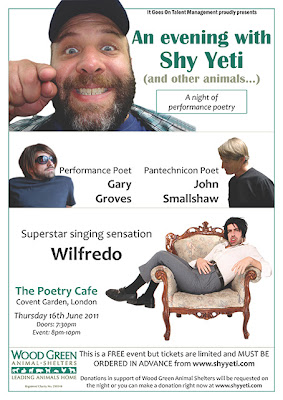 AN EVENING WITH SHY YETI - AND OTHER ANIMALS....

It's called AN EVENING WITH SHY YETI - AND OTHER ANIMALS. I'll be hosting and reading some of my work and also, during the night we have performance poet GARY GROVES, Pantechnicon poet JOHN SMALLSHAW and superstar singing sensation, WILFREDO. It's at the Poetry Cafe on Thursday 16th June and it's available for booking NOW!!

If you want to come along then you'll need to book a (free) ticket via this link as spaces are limited: http://aneveningwithshyyeti.eventbrite.com/ The tickets are going to go quickly as there are only a limited number - so get busy and book yourself in, why don't you!?! *Your yeti commands you...* ;)

As far as the charity is concerned - the night is in aid of WOOD GREEN ANIMAL SHELTERS and you can either donate to the charity on the night or via the following link: http://www.justgiving.com/itgoeson/ if you are unable to attend.

You can read more about the charity at: http://www.woodgreen.org.uk/

In case you hadn't noticed you can now reach this site via our my new web address www.shyyeti.com - and I expect to be putting more information about the night, the charity and the other performers nearer the time.