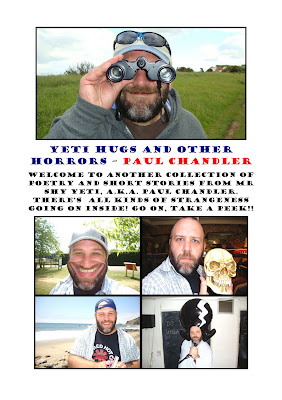 Just to let you know that YETI HUGS AND OTHER HORRORS is now out. Hoorah!!!

The paperback came out on Friday (a week earlier than announced) on 25th March 2011 and the hardback emerged today!

YETI HUGS AND OTHER HORRORS

Paul Chandler's latest collection of writing contains 55 new poems, 6 vignettes inspired by a trip to Hollywood and 9 darkly-humoured yet scary short stories! YETI HUGS & OTHER HORRORS... was written between December 2009 and October 2010. Verse includes CUPCAKE, A FLEA TEA PARTY, A SWEET TAIL - as well as a trilogy of poems: GEOGRAPHY BE DAMNED, JUST TO GET MYSELF TO YOU and YOU, ME & THE HOLLYWOOD HILLS. In the short stories we meet a football mascot who gets rather too attached to his costume, two rather curious neighbours - an O.A.P and an amphibian man, an autograph collector who specialises in werewolves and vampires; not to mention a tattoo artist's assistant who learns his new boss's rather macabre method of dealing with customers who refuse to pay!

The paperback is available for £9.99

At the end of the post I have included a vignette from the collection called WORK IS RUBBISH, which was - erm - kind of inspired by a true story...

Now all I have to do is decide which pieces I'll be reading from the new book at my Poetry Cafe show next Saturday! :) More about that once I've actually done it - and no doubt there'll be a video or two from the show, as well... There better be as I was out recording links for it yesterday! ;)


“This place is a mess…” boomed my boss's boss. “It's an absolute tip…”
“It's a working environment!" replied my boss, addressing him as politely as possible.
“It isn't mess - it's work that needs completing once we get the free time to do so…”
“It's a mess…” my boss's boss snapped back in his typical understanding self.
“I want it cleared up…”
My boss looked over at me and my colleague, hoping for some support;
Which I was happy to give.
“You really don't understand how libraries work, do you?” I chipped in.
“An empty desk would infer we had no work to do!”
“Nonsense… Just do as I say and tidy up the place…”
“We deal in books - books need to be catalogued, processed, put on shelves…”
I continued defiantly.
“We're under-staffed…” added my colleague.
“You know that - we do our best and our customers appreciate us…”
“How would you like it if we came into your office and spoke to you like this…”
I said. “This is bullying…”
“I don't care what it is - or what other people say…” my boss's boss snarled.
“I say this place is a mess and it needs to be tided, right this minute –
Throw all this rubbish away or I'll do it myself…”
For a moment all was silent, but then finally my boss looked at me –
And I looked back at my boss…
And then we both looked at our colleague, the library clerk and then we all nodded.
“OKAY GANG!” we said in unison. “Let's tidy up…”
So saying we crossed the room as one formidable information-processing unit –
A juggernaut of knowledge…
And without a word we picked up my boss's boss by his legs and his arms…
We carried him, vainly struggling in our iron grip, out towards the back yard...
Then, once out there we plopped him, unceremoniously, into the recycling bin.
At once - and without too much trouble - our work was done.
“He was right…” sighed my boss. “It does feel good to have cleared some space…”
And YES… We all agreed, it really did…

Two weeks later and our boss's boss is still out there, I believe.
It would appear that nobody cared enough to go and get him out.
Shame that; but at least his shouting seems to have died away now…
Such a pity; but he was a bully and got no more than he deserved...
Oh yes, he really was trouble that one - cluttering up the place like that...

WORK IS RUBBISH is from Paul Chandler's new collection: YETI HUGS AND OTHER HORRORS. OUT NOW!! (See above links) All content of this post is Copyright Paul Chandler 2011.
Posted by Paul Chandler at Monday, March 28, 2011