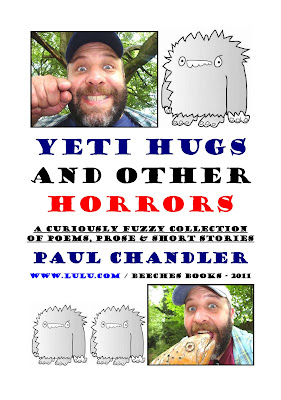 "YETI HUGS" SUCCESSFULLY DELIVERED!!
Hello﻿!
Just a quick trumpet blast to announce the news that my new book is pretty much up and ready and should be available to be launched at my Poetry Cafe show on Saturday 2nd April 2011. As of yesterday both a paperback and hardback edition of the book shot off to Lulu.com to be printed and if all looks well when I receive my first copy then it will be officially available from Friday 1st April. April Fool's Day. Yup! That was deliberate, of course! ;)
Meanwhile, work goes well with THE VAMPIRE COWS OF SCUNTHORPE collection, which may now be released late Summer alongside the new Mouse of Commons book: GLADSTONE MCWHISKERS AND THE COUNTER-CLOCKWISE CONUNDRUM. I'm not sure I can wait until November to release it! I am also putting together a 10th anniversary edition of JUNK/FOOD - available for the first time on Lulu on its own two feet with photos, additional information and comments. But more about that, launches, show etc later in the year. I have also written the first dozen or so pieces for my FUNERAL FOR A SHOE collection - it's going to be more prose and short stories than poems this time - but I'm aiming for a mixture.
For those of you who still keep an eye on the Top 40, I reproduce for you below my very own Top 40 - although it's slightly more than that. It's a list of my Youtube and Vimeo films and how many hits they have had - whether it be poetry, prose or yeti dancing videos.
But before that I have a new poem for you from YETI HUGS AND OTHER HORRORS. It's called STREETLIGHT GLAMOUR and it's all about people not having enough money to go out partying in these credit crunch days - but doing their best! Even using the light of a street lamp to tart themselves up...
STREETLIGHT GLAMOUR

I am stood in the light of a street lamp –
I am using the glow to get dressed...
And although it's a little bit gloomy –
I am wearing my smartest and best…
I'm applying my make-up discreetly…
So pedestrians surely won't see…
So the law will not think I'm a hooker –
Alas, I've just got no elec-tricity!
I intend to dress up and go out, see…
I intend to find someone who's rich…
I've no choice – ‘cos I need to be thrifty –
‘Cos these credit crunch days are a bitch…
So, I make use of what's freely provided –
And then hope no-one thinks that I'm weird!
I am going for cheap street light glamour –
And just pray my mascara's not smeared...


I am stood in the light of a street lamp –
Now the daylight's beginning to fade…
Gonna spruce myself up down an alley…
Then begin my triumphant parade!
I am loving my lovely reflection –
That I glimpse in the shiniest cars...
In the tramp's piss that lies in the gutter…
As I'm haloed by radiant stars!
I am truly alive on the pavement –
As I rifle the waste-bins for scraps…
As I pick up fag ends they've discarded…
When I smile they do not see the gaps…
I will drink 'til the moon starts to dazzle…
Sleep at yours as I've nowhere to stay!
I am going for cheap street light glamour –
There's no doubting we'll do things your way!


I am stood in the light of a street lamp –
And my eyes are beginning to hurt!
There's no doubt that I need to get ready –
But my high heels are still caked in dirt…
I just need to look sexy this evening –
Take a shower now under the rain!
How I wish that my short arms were longer…
Since I just dropped my purse down the drain!
Oh, the times now are hard, that's for certain…
I'm still out on the town having fun…
Out there washing my clothes in the puddles –
Then just drying them off in the sun…
Above me the lamp glow it flickers –
Soon I'm gonna be ready to go…
With my terribly cheap street light glamour –
If I'm dancing well, no-one will know!

Hopefully you enjoyed that. That's all for now. The Top Videos list follows at the end. Get watching, won't you - there a lot of them out there that are feeling jealous that their hits are much lower than some of their filmic brothers and sisters. *blushes* What AM I on about!?! Anyway - I'd just like to say thank you to everyone who has watched the recent A YETI IN WINTER video. It's already had 84 hits and has only been up for a couple of weeks. I am currently working on the much-delayed AN AUTUMNAL YETI video which was recorded last year - as well as beginning to think about editing more SUTTON PARK SW1 episodes. I have also recorded a video of me reading one of my short stories from THE VAMPIRE COWS OF SCUNTHORPE - but will probably post that nearer the time that the book is due. In late April/early May I also expect to record a 2 or 3 part A YETI IN... Well, I can't say where yet... More news on that nearer the time!

Paul's videos can be viewed at MRSHYYETI on Youtube and SHYYETI on Vimeo. STREETLIGHT GLAMOUR is Copyright Paul Chandler 2011 and appears in his new collection YETI HUGS AND OTHER HORRORS - due out on www.lulu.com on Friday 1st April 2011.