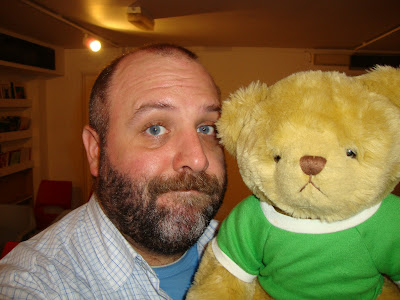 I am glad to announce my gig at The Poetry Café this week went extremely well - despite Monday evenings not necessarily being the best night of the week for a lot of people. Those who showed up were greeted by the dubious sight of me in an inflatable Bride Of Frankenstein wig and in the second half a rain mac and panda shower cap - it was my way of saying that NO, yeti do not wear pyjamas - but they do sometimes wear this. There should be photos of both costumes elsewhere in this post. 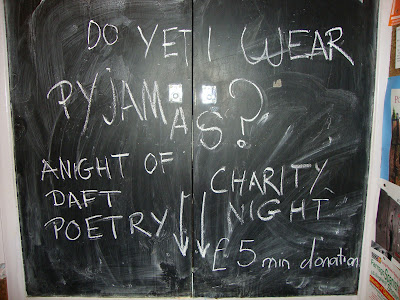 I'd like to thank Dan for filming and taking photos at the events - also to Calum, Harry, Lorraine, Maggie, Jay and Baz for attending; as well as a number of other café visitors who sat in to watch towards the end. I read 18 pieces in the first half and 20 in the second; many of them I had not performed live before and I was especially pleased with the audience's reaction to A LITTLE MOUSE as I had only completed the week before. 19 of the 38 poems read were videoed by Dan.
Of course one element that I have yet to mention is that for the first time this gig was all for charity - something which I think I'd definitely like to keep doing in the future. Thank you to my dad, Michael Chandler, for sponsoring the night (ie: paying the loan of the venue!) and to those who attended for their donations. By the end of the night we had made over £50 for MACMILLAN CANCER SUPPORT which, I am sure you will agree, is a very good cause.

Please note: Poems with an asterisk were recorded by Dan for future Youtube videos.

I SHOULD NEVER *
MY DOG IN A DRESS *
READY - TEDDY - GO!!!
LITTLE PIG
A LEARNING EXPERIENCE *
THE TRUE LIGHT
DO YETI WEAR PYJAMAS? *
I LOVE YOU LESS *
WE'RE GOING TO CLONE YOU!! *
ASK NICELY *
THE CROCODILE *
THE DAY THE PRIME MINISTER CAME TO TEA *
BREAKING UP IS HARDER (WHEN NEITHER LOVE WANTS TO PART) *
I NEVER SAY NO TO PIE
YOU ARE THE NIGHTMARE THAT KEEPS OTHER NIGHTMARES AWAKE *
THE STAND-UP CHAMELEON *
THEY WARNED ME ABOUT PEOPLE LIKE YOU *
SHE NEVER HAD ANY LUCK… *

THE SORRY TALE OF FRED THE DINOSAUR
PARTY GIRL
I'VE BEEN TO A MARVELLOUS PARTY (NOEL COWARD)
WE AIN'T GOT TIME *
POLITELY ENRAGED *
BEST THING SINCE SLICED BREAD *
WE WERE GOING TO BE WED (WHEN WE BOTH HIT 40!!)
BECOMING MORE CAT-LIKE
A FLEA TEA PARTY
I KNOW HIM…
JUST TO GET MYSELF TO YOU
MY AMERICAN HUNK
WAITING FOR GHOSTS
WORK IS RUBBISH
YOU, ME AND THE HOLLYWOOD HILLS *
FIRST SNOG *
THE VAMPIRE COWS OF SCUNTHORPE
A LITTLE MOUSE
LAS VEGAS LIPS
I WILL EAT PIES 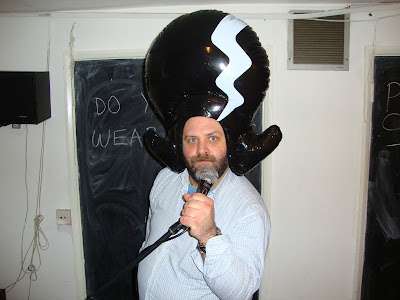 THE SHOW IN A LITTLE MORE DETAIL

The first six poems were written over a 10 year period and were included in various books - but were gathered together in 2009 for my SHY YETI RULES OK collection; which basically contains most of the poems that I regularly perform live at open-mike, at shows or on my Youtube or Vimeo videos. I haven't read I SHOULD NEVER very often; MY DOG IN A DRESS often gets read because it's one that my friend Dr Neph likes. READY-TEDDY-GO!!! I read because my friend Maggie was in the audience and she was there when I wrote that one. LITTLE PIG is one of my favourites and the final two are usually ones that I either read early on in the night or right at the end as they are amongst my most requested pieces.

Six poems from my 2010 collection, DO YETI WEAR PYJAMAS? The title poem I felt I should read as it was the poem that both my latest book and the night itself was named after. The next 3 poems I have all recorded for various SHY YETI ON LOCATION videos during the year - whilst THE CROCODILE is work-inspired and one of my work colleagues was in the audience - whilst THE DAY THE PRIME MINISTER CAME TO TEA I read at open-mike at The Poetry Café back in the Spring on the night that David Cameron became Prime Minister; although it was actually inspired by a visit to my work by Gordon Brown the previous autumn.

These are some random poems selected from my 2008 collection which I haven't read live before; although THEY WARNED ME ABOUT PEOPLE LIKE YOU has its own Vimeo video. In addition to this I offered the audience the chance for me to read THE STAND-UP CHAMELEON, YOU ARE THE NIGHTMARE... and MISTER BEE. YOU ARE THE NIGHTMARE... was selected, but then Maggie from the audience "pleaded" with me to read THE STAND-UP CHAMELEON, so I did both!!

One of my earlier pieces from 2001, which I've not read very often and thought might be a good one to finish the first half with; although it is rather sad. I had also intended to read DON'T SNOG BEES, YOU CRAMP MY STYLE and RECKLESSLY during the first half, but ran out of time.

Dan also recorded a couple of short interviews with me during the break - one on the sofa where I had to sign a book and then later when I was dressed in my "rain mac" costume.

Another two poems that appear in the SHY YETI RULES OK compilation. THE SORRY TALE OF FRED THE DINOSAUR is one of my earliest poems from 1992 and although it sounds a little creaky compared to some of my later work I do have a soft spot for it and it's one of the few that I still read from that period. It also has its own Vimeo video. PARTY GIRL is a little more recent and is one that I've intended to read at a gig for a while.

I'VE BEEN TO A MARVELLOUS PARTY
NOEL COWARD (1938)

The only cover version that I have ever done at one of my shows. This is by Noel Coward, of course and I decided to read it after receiving a book of humorous poems for my 37th birthday in November 2010, from my friend Glyn Green - who was unable to attend the event on the day. However it made me realise that a number of my own poems are probably inspired by the style of Coward, even though I wasn't completely familiar with this one. I do hope I did it justice - reading it in my best Noel Coward voice!

It was also read as an introduction to a number of poems that I have written over the years that are quite Cowardesque.

WE AIN'T GOT TIME *
From THE VAMPIRE COWS OF SCUNTHORPE & OTHER POEMS (As yet unpublished, 2011)

The first of my sequence of poems that could be said to unconsciously inspired by Noel Coward. This is a very new one; I had only finished it a few days before I read it, along with A LITTLE MOUSE which I read towards the end of the evening.

These three were all compiled in the SHY YETI RULES OK book and also fit well with the Noel Coward-esque feel of this part of the show. The first is a very polite angry poem, the second is a rather catty, vaguely witty piece about a failed relationship and the final poem is about a failed promise and contains one of my favourite final verses of any of my poems.

BECOMING MORE CAT-LIKE
A FLEA TEA PARTY
I KNOW HIM…
JUST TO GET MYSELF TO YOU
MY AMERICAN HUNK
WAITING FOR GHOSTS
WORK IS RUBBISH
YOU, ME AND THE HOLLYWOOD HILLS *
FIRST SNOG *
From YETI HUGS & OTHER HORRORS (2011)

Nine poems from my next collection, due out in January. BECOMING MORE CAT-LIKE I read during my aborted SHY YETI ON LOCATION video from Venice and A FLEA TEA PARTY appears in my summer 2010 SHY YETI episode. I KNOW HIM is a pretty late addition to that book, JUST TO GET MYSELF TO YOU appeared in my SHY YETI IN HOLLYWOOD video and YOU ME AND THE HOLLYWOOD HILLS I read during open-mike in L.A.; which appears in my COBALT CAFÉ video. MY AMERICAN HUNK, WAITING FOR GHOSTS and WORK IS RUBBISH are all pieces from the new book that hadn't previously been performed; as with FIRST SNOG which is part of the HOLLYWEIRD segment of the new collection.

Two very new pieces - that are due to appear in the book after next - which means they certainly won't appear until late 2011 or early 2012. The next book was due to be called something else (I can't tell you what as it may eventually end up as the title of my 2012/2013 collection…), but in the end I decided that THE VAMPIRE COWS OF SCUNTHORPE & OTHER POEMS was too good a title not to use! A LITTLE MOUSE was only finished a week before the actual gig and I am rather pleased by how well it came together after a bit of a slow start. WE AIN'T GOT TIME, which I read during the Noel Coward section is also from this collection.

These two were also compiled in the SHY YETI RULES OK book - the first I read as I am due to return to Las Vegas in the very near future (having visited previously in 2000 and 2003) and the second - well, that's a piece that is inspired by the song "I Will Survive" which I always read as my final piece of the night.

I was going to read the poem RESPECTABLE TEXTS, but ran out of time to do so. I also had a lot more set aside as back up - these included: CRASHTESTBOYFRIEND, OH FLORENCE!!!, THE BIRTHDAY THAT NEVER WAS…, CUPCAKE, FILMSTAR, THE KING OF RHYME, CHILLI PEPPER FINGERS, ENGLAND LOVES YOU…, THE PARENTS TURN AGAINST THE CHILDREN, PICCADILLY CIRCUS, CATFOOD IN YOUR EYEBROWS, JUST HOW SLUTTY ARE LIBRARY BOOKS?, YOUR APRIL FOOL, YOU DON'T EXIST, DO SHEEP MIGRATE?, BEING COY, MY MOMENT IS NOW!!!, OTHERWISE ENGAGED, DJ DARLING, EXIT PURSUED BY A YETI, I WANNA BE A ROCKSTAR GROUPIE, RHYMES BEARS STEAL PIES FOR, DISCO YETI, I WANT YOU NOW (NO I DON'T!), THE SOLEMN SALAMANDER, THE BALLAD OF TINY ELVIS, CAT THIEF, SO MUCH LOVE - SO LITTLE TIME, BAD STUFF I WISH WOULD HAPPEN TO YOU, NO-ONE EVER FELT COOL BUYING AN MP3 FILE, YOU TRULY WERE THE HANDSOMEST, SOMETIMES I JUST WANNA, YETI SPAGHETTI and THE UNGRATEFUL VALENTINE. Some or all of which should probably get a shot when I do my next gig in the Spring of 2010. Watch this space… 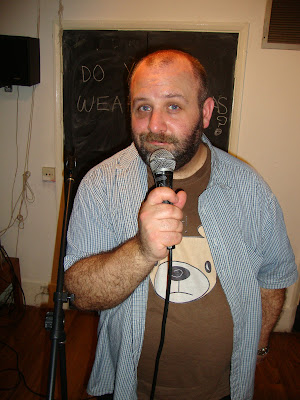 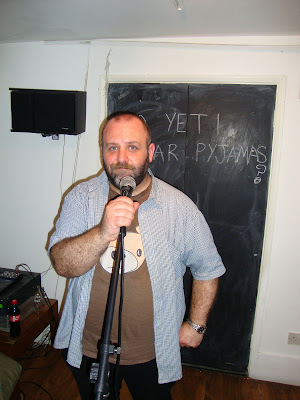 I have completed work on a live video to post on Youtube as of today which includes the poems: I SHOULD NEVER, THE CROCODILE, THE DAY THE PRIME MINISTER CAME TO TEA and I NEVER SAY NO TO PIE all of which have never been available to view online. I intend to post a second video sometime between now and Christmas - not to mention a couple more SHY YETI ON LOCATION episodes! It's all go. 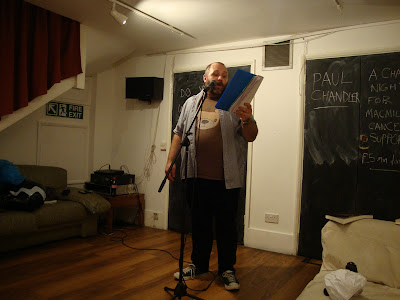 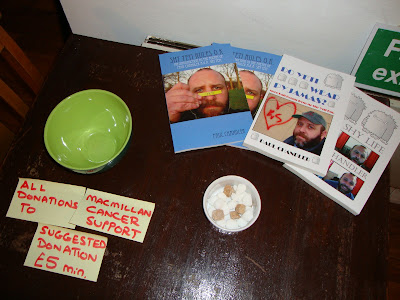 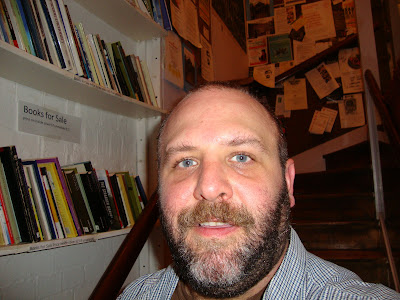