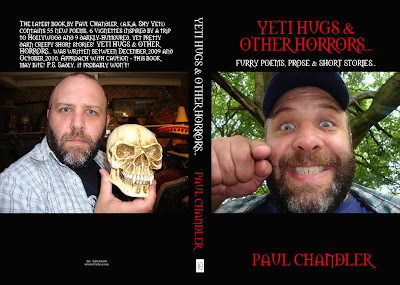 MY 150TH POST: INTRODUCING "YETI HUGS AND OTHER HORRORS..."
Hello and welcome!!

This post is particularly important for two reasons; firstly it reveals what I hope is the final title and the cover (of the paperback version) of my next collection and secondly because it is the 150th post on this blog since I began it in 2002. Originally the new book was to have been called THE DEATH OF LOVE; I mentioned it a number of times on here and it is referred to as so in the first edition of A SOUPCON OF SHY YETI. There is even a poem called THE DEATH OF LOVE included. Who knows - maybe I'll come back to that one, but it just didn't seem to fit this collection and so I re-christened it LOVE FUZZ AND YETI HUGS. You can see one of the early cover proofs below... 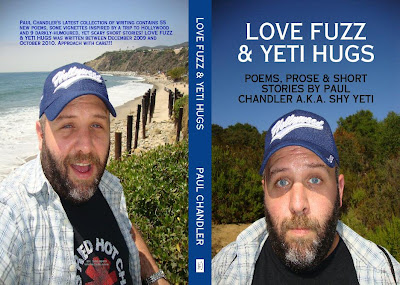 In the end I decided that, although I liked the front cover picture I did look a little sweaty (well, I was in California in August!!), but that also LOVE FUZZ AND YETI HUGS also sounded a little too jolly for a book that contained 9 short horror stories. However each of the different sections will have a title of their own. One of the other titles that I considered was SHY YETI'S BUMPER BOOK OF HUGS AND HORRORS - which was simply far too long, but from that I ended up with YETI HUGS AND OTHER HORRORS. I was keen to keep YETI HUGS in the title as it's how I've signed off a lot of my posts over the years on this blog and in my books - not to mention something I tend to use when I'm asked for the very occasional autograph. (It does happen, believe it or not and I'm always very flattered to do so!) 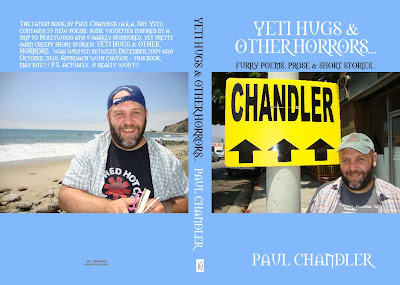 This cover was the first cover that I tried with this title - still using photos that were taken on my Californian trip - however, looking at it I decided that it was probably a little too bright and summery. 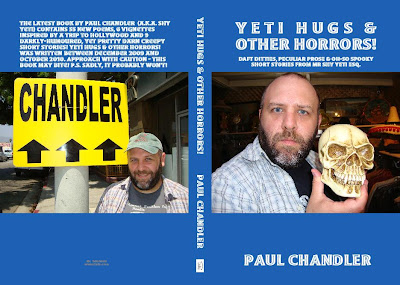 This one I quite liked and it saw the introduction of the skull photo that ended up on the back of the final cover; another California photo. But in the end I decided to go back to the previous font and use one of my favourite photos from this summer; taken by myself on a walk on a rainy August afternoon near Winchester.
I intend to post the titles of the poems and short stories in the new book and maybe one of the new poems over the next couple of months! Anyway - I hope you like the new title and the cover (at least the one that I'm using *THIS* week!) The book is still in the proofreading stages - and I don't really think that December is a very good month to launch it, so I guess it will be out sometime in mid-January. I may also do a small book launch sometime around then too. The rest of the year is going to be pretty busy what with a couple of big trips still on the cards - trips that should feature in forthcoming SHY YETI ON LOCATION videos. Speaking of which SHY YETI VERSUS AUTUMN is still being edited and I am determined to get in finished next month before it becomes officially Winter. (When *is* that?)
To finish with - and to celebrate the 150th anniversary I'm going to select 5 random posts for you peruse and explain their importance as far as they relate to the blog; they're in date order rather than any other order! Also I thought I'd share with you the title of a poem I've been working on this week - which is not quite finished, but will probably be the first poem for my NEXT collection. The poem is called THE VAMPIRE COWS OF SCUNTHORPE. Yup. Okay... I'm going now!
Those random five posts follow - check them out if you are so inclined - two or three of them feature a poem! If not I'll return soon, when I may have more information about the SHY YETI ON LOCATION video that I intend to film during my November birthday vacation and my charity gig at The Poetry Cafe on Monday 22nd November!
SHY YETI'S 5 RANDOM BLOG POSTS:
MAY 2002
http://thedaffypoet.blogspot.com/2002_04_28_archive.html
The blog was pretty basic at this stage and I was almost writing it as a fictional diary at this stage. The first post includes one of my favourites: HERBAL TEABAGS.
OCTOBER 2005
http://thedaffypoet.blogspot.com/2005_10_09_archive.html
My first blog post with photos! It made a lot of difference to blogging to be able to make it more interesting to read and to be able to show off photos of book covers or gigs. This contains the poem: I WOULDN'T WANT TO BE 18, AGAIN from POEMS TO MAKE BEARS GROWL.
AUGUST 2006
http://thedaffypoet.blogspot.com/2006_08_06_archive.html
Lulu.com starts to have an effect on my back-catalogue as I begin to take photos for re-released versions of the early books.
FEBRUARY 2008
http://thedaffypoet.blogspot.com/2008_02_10_archive.html
This is the kind of thing I love doing - writing a poem one day and having it up on the blog within about 24 hours! The ultimate in being able to get an immediate reaction to something you've written and I still do it to this day. The poem here is THE UNGRATEFUL VALENTINE.
NOVEMBER 2008
http://thedaffypoet.blogspot.com/2008_11_23_archive.html
A very busy month indeed - book launches, reading on the radio - off to Oslo... Also a poem: TOO SLUSHY FOR SNOWMEN, which is also one of the first poems that I read for a SHY YETI ON LOCATION video.
I rather enjoyed that! lol
Yeti hugs, Paul xx


P.S. You may be wondering who this cute little fellow is - well, he appears in my next book! Thank you to Sercan for letting me use him and another of his character. Sercan and I are currently discussing the possibility of him illustrating a revised 10th Anniversary version of MOUSE OF COMMONS - MOUSE OF LORDS, the first Mouse of Commons novel... So, watch this space!! 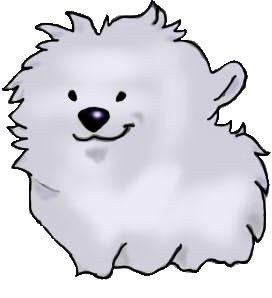