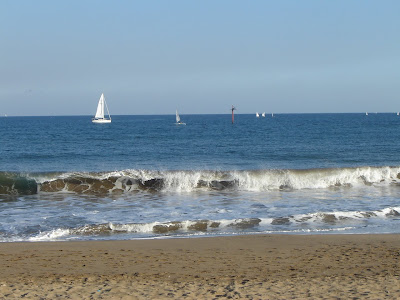 "TO BE BESIDE THE SEASIDE" AND "THE YETI MACABRE"...

As promised, I present to you here a little something more from my next book: DO YETI WEAR PYJAMAS?

It's called "TO BE BESIDE THE SEASIDE" and is more of a prose piece than a proper poem - I wrote it in Nice, last October.

Work on DO YETI WEAR PYJAMAS continues apace - and the book is still due to emerge in May; no exact date yet - but I should know more by the end of next week.

Additionally to this, the next book of poems and the next Mouse of Commons novel - this week saw me beginning to work on a new compilation of my more horror-based, supernatural and just plain odd writing! The title of this collection was to have been YETI FANTASTIC - but has since become THE YETI MACABRE which my old friend Andrew Davies suggested to me during an email chat. I thought it was perfect and definitely suits the collection. THE YETI MACABRE will be a collection of short stories (the first is called THE NEXT-DOOR NEIGHBOUR and there will be several more) and the rest of the book will be populated by the more horror-based pieces of prose and poetry that I've published in my poetry collections to date.

Anyway - enjoy TO BE BESIDE THE SEA-SIDE; actually this is probably weird enough to appear in the THE YETI MACABRE too!

PS Eagle-eyed viewers may note that the photo that I have used to illustrate this poem does not come from Nice - but elsewhere! (Nice has a rocky beach - whereas the one in the photo does not...) The photo actually comes from my November 2008 trip to Barcelona; one of the locations in my forthcoming Mouse of Commons collection: POSTCARDS FROM MCWHISKERS - which should be out this summer.

TO BE BESIDE THE SEASIDE…

Bobbing about in the sea off the beach in Nice one mild October afternoon...
There's nothing like a bit of seawater to wash away the cobwebs!
The sun is hot, but I am British and a prude...
But I have been sensible and I have thought ahead!
I wear a sky blue t-shirt from Primark that boasts of the Californian sun!
My friend, Harry, rests uncomfortably on the pebbles reading philosophy...
But no book nor philosopher can ever truly understand the sea...
Back amongst the waves a few minutes of floating about can really relax one…
It can really make your mind work overtime;
There amongst the waves I am a mermaid...
A hairy, beary mermaid - but a mermaid none the less!
My chunky oafish paws now one heavy flipper...
I could swim out to sea forever; I could dive deep to drink tea with sea horses!
Wait. How would sea horses actually drink tea!?
How would they tell where their tea ended and the sea began?
Wouldn't it taste really salty?
Maybe they wouldn’t mind that or they would simply keep it in a flask…
Perhaps they’d just suck teabags between their teeth and hope for the best!
Or perhaps they'd just keep going until they reached Italy...
Get out of the sea; catch a train to Turin –
And then have their tea there. I mean it would probably be a lot safer too.
Something is squawking loudly above me.
Could it be my conscience or simply Harry calling me in for our fish supper...
It is neither; merely gulls in flight and they have seen me!
They have mistaken me for a large piece of white bait or a giant sprat!
Be gone foul winged beasties; can't you see I'm a mermaid!
Shouldn't you be afraid or at least have a little respect...
Things look bad - they're going to grab me, nip me, tweak me, poke me…
Tenderise me until I'm fit to be eaten and then lift me high, high into the air!
To be flown back to their nests to be devoured by their children or wives –
By their husbands, their maiden aunts, mother-in-laws and close family friends!
That said, I'd like to see them try and lift me...
Chances are they simply intend to poo upon my head!
Not waiting to find out, I dive beneath the water to escape them...
How clever am I?
Underwater I can hear the clinking of tea cups and the boiling of kettles...
The sea horses are getting ready for afternoon tea and I am NOT invited!!
Although slightly cross I am also more curious as to how they manage it!
How CAN it be possible? Should I swim down to check it out?
For a moment I consider it, but then remember that fish supper...
Something that I really don't intend to miss out on!
Being a mermaid is not what it's cut out to be – so I head back to shore.
Clambering back across the pebbles wistfully towards my towel!
Oh my. How hot the sun is. How hot my head is!!
I look back towards the sea one last time...
The sea horses are waving and raising their tea cups.
There are dolphins out there too and they have cake, damn them...
Next time I return I'll ensure that I'm a jelly fish, then see how they like it!
Next time I'll be a whale or a shark...
Next time, perhaps, I'll also wear a sun hat.