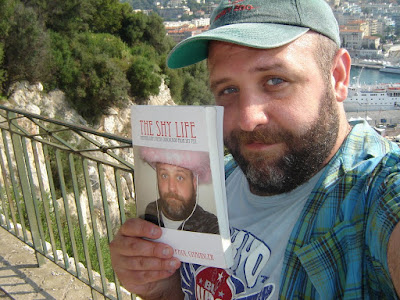 COUNTDOWN TO "THE SHY LIFE"

It's now less than a month until my next collection "THE SHY LIFE" is to be published, although at time of writing I still have about another two weeks of frantic proofreading to complete - but if all goes to plan the final version of the book should go to Lulu by Friday 23rd October, two weeks before the book launch on Friday 6th of November 2009. Keep your paws crossed for me, please.

In this post I intend to post a chronology of the writing of "THE SHY LIFE" to date as well as briefly covering my recent BLOGTV gig on the 30th September. I am also just back from Nice where I was working on my next collection "DO YETI WEAR PYJAMAS?" and have currently written more than a dozen new pieces with a number of others nearly complete. I was also taking some photos for this new collection whilst in France and am travelling to Poland to take some more in mid-November. You'll also see a few of the Nice photos in this post. Titles for the next book currently include: ASK NICELY..., BREAKING HEARTS IS SUCH A BITCH!!, THE CAFFEINE QUEEN..., A CHEERLEADER FOR YOU!!, D.J., DARLING..., DO YETI WEAR PYJAMAS?, FAMOUS PEOPLE ARE A PAIN IN THE ARSE..., JUST HOW SLUTTY ARE LIBRARY BOOKS?, LOVELY LIES..., LOVE YOU, STINKY..., THE MYSTERIOUS ART OF LUMPOLOGY..., NEIGHBOURS FOR NOW..., A SAINT OR A SINNER!?, SECOND 29TH BIRTHDAY..., A VAMPIRE FOR CAKE...

Once "THE SHY LIFE" is off to the printers I will post another entry and include one of the new poems from this collection.

But for now - here is how the new book came to be almost ready for publication!

I hope you find it and some of the photos of interest! The cover of "THE SHY LIFE" that appears in the photos is slightly different from the finished version - sadly the pink fluffy hat has been banished!! :) 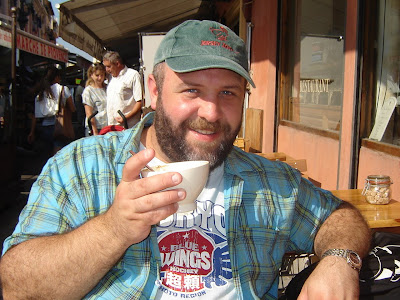 THE SHY LIFE - A TIME LINE

9th April – THERE AREN’T ANY NEW TRICKS, the first poem for THE SHY LIFE is begun – only another 7 months and the book will be published!

12th May – THERE AREN’T ANY NEW TRICKS completed.

26th May – THE SHY LIFE first mentioned on my blog as the tentative title for the collection after CAVEMAN LOGIC.

During May a total 12 new poems are completed for the collection.

18th June – THE SHY LIFE is mentioned on my blog and is developing nicely!

20th June – MAKING TOAST FOR THE ENEMY is the first poem from THE SHY LIFE to be read during my 4th broadcast on BLOGTV.

24th June – THE FLAMINGO WHO HATED PINK read on my 6th BLOGTV show.

During June a total of 20 new poems are completed for the collection.

2nd July – An entry on my blog discusses that THE SHY LIFE poems have been debuted on BLOGTV. On the same day I read PROUD TO BE A LIBRARIAN and FULL OF HOT AIR during my 11th BLOGTV.

4th July – During the second half of my 12th broadcast on BLOGTV I debut 4 new poems from THE SHY LIFE: HOLLYWOOD: LOW BUDGET, IF YETI WERE SHY, IT’S EASY BEING NICE IF YOU’VE A BUTLER and KISS ME QUICK.

6th July – During my 13th broadcast I read KISS ME QUICK again as I had run out of time during the previous show.

7th July – Located lost notebook containing a number poem ideas from a trip to Oslo in November 2008 and decided that they were worth finishing. These poems included THE UNAFFORDABLE FJORD, AN ESKIMO IN MY TEA and A LITTLE VIKING.

11th July – During my 15th broadcast I read RESCUING BEARCUBS ON BUSES and the AFFORDABLE FJORD in the first half of the show and A LITTLE VIKING, ARREST ME, HANDSOME and AN ESKIMO IN MY TEA during the second half.

15th July – An entry on my blog claims: THE SHY LIFE will be ready by November.

20th July – During my 18th broadcast I debut A DARK SIDE TO YOU.

21st July – During my 19th broadcast I debut I MUST HAVE BEEN REALLY BAD, I’M JUST TOO GOOD FOR THE MOVIES, IT HAPPENS ALL THE TIME in the first half of the show and I’VE HAD ENOUGH, A FETE WORSE THAN DEATH and PARALLEL WORLD during the second half.

During July a total of 16 new poems are completed for the collection.

1st-18th August – Proofreading for THE SHY LIFE is carried out during my Munich to Budapest trip, travelling along the Danube via Vienna. The last two poems are completed: THE CREATIVE GNU and COLIN THE CUSTARD-EATING SPIDER. Also whilst away many photos which appear in the finished book are taken.

22nd August – I debut THE CREATIVE GNU and COLIN THE CUSTARD-EATING SPIDER during my 20th BLOGTV broadcast.

25th August – An entry on my blog mentions that the proofreading has been done whilst away – around this time I am adding photos from the book to the existing copy. The first poem to be posted from THE SHY LIFE also appears in this blog entry: THE CREATIVE GNU, one of the poems that I completed on holiday.

During August the final 2 poems are completed and proofreading begins.

7th September – A 254 page draft of THE SHY LIFE is sent to Lulu.com and 2 copies are produced. The finished books needs to be edited down by approximately 4 pages and photos and a report from the September gig will be added.

8th September – During a blog entry the full list of poem titles from THE SHY LIFE is revealed, as well as the publication date (Friday 6th November), the page count and price. Another of the holiday poems: COLIN THE CUSTARD-EATING SPIDER is posted at the same time, only the 2nd poem from the new book to be posted, so far.

11th September – The draft Lulu version of THE SHY LIFE arrives and I begin to make some changes, reducing the number of screen-grabs used in the BLOGTV section, lightening some of the photos and adding this TIME LINE section.

16th September – At my CAVEMAN LOGIC gig on this day I read 4 poems from THE SHY LIFE. These were: COLIN THE CUSTARD-EATING SPIDER, HOLLYWOOD: LOW BUDGET, IF YETI WERE SHY and KISS ME QUICK.

30th September – Now busy with my next book: DO YETI WEAR PYJAMAS, I do a BLOGTV show version of my recent Poetry Café gig, with a couple of changes: IF YETI WERE SHY, RHYMES BEARS STEAL PIES FOR, THINGS AIN’T WHAT THEY USED TO BE (PT 1), READY, TEDDY, GO…, WAVES, THE CAFFEINE QUEEN, BREAKING HEARTS IS SUCH A BITCH!!, UNFULFILLED, FLAUNT TRADITION, KISS ME QUICK, HERBAL TEABAGS, LAS VEGAS LIPS, THE GREAT BOOKSHOP IN THE SKY, CAVEMAN LOGIC, THE SORRY TALE OF FRED THE DINOSAUR, FLOOZY, SOON ON YOUR WAY, COLIN THE CUSTARD-EATING SPIDER, THE TRUE LIGHT, A LEARNING EXPERIENCE, I WILL EAT PIES, DISCO, EXIT PURSUED BY A YETI

1st – 4th October – Continued final proofreading of THE SHY LIFE and work on new material. Having received the draft hard copy from Lulu I work on final editing during a trip to Nice between the 1st and the 4th of October - with only a few changes to be made on my return...

Here are some of the photos from the Nice trip - THE SHY LIFE should reach the printers by 23rd October and be ready for my book launch on 6th November... Postal strikes allowing! 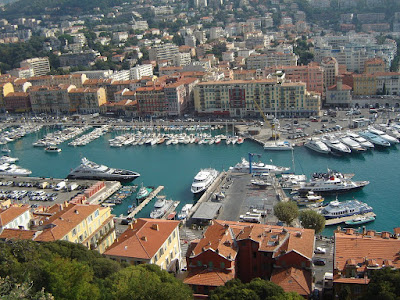 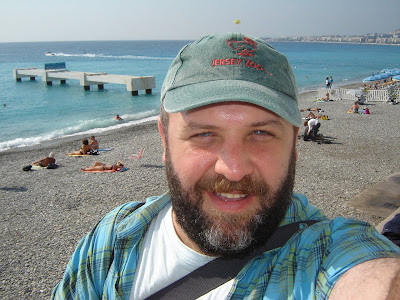 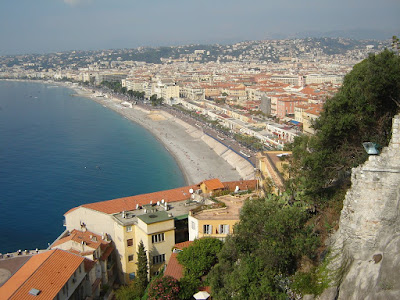 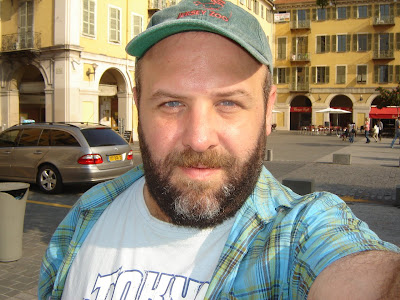 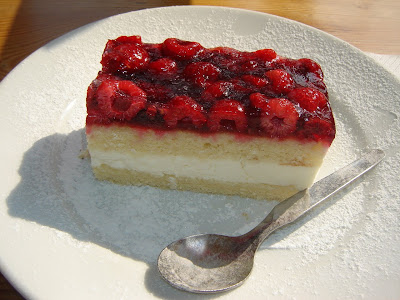 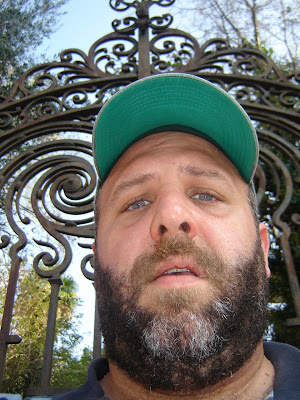 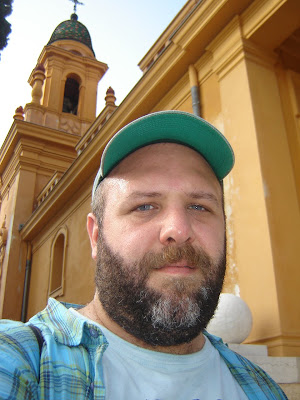 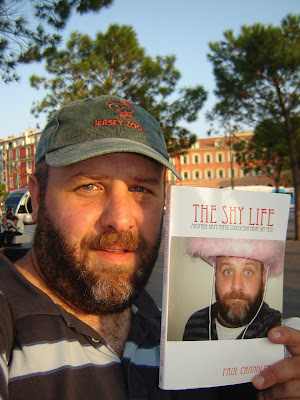