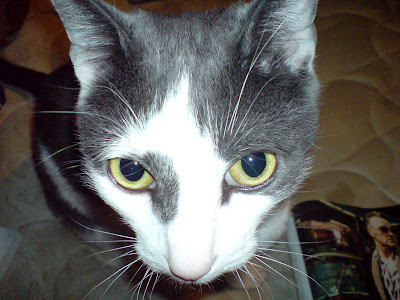 Well, I've been writing a few new poems, of late and wondering whether to put them into a separate new collection or whether to include them in my retrospective collection of this blog: SINGLES FILE. I've not yet decided - let's see how my inspiration goes. On other poetry news, I've been practising for a potential gig that I may be doing in April and repackaging my relationship themed poems into a second collection: WOOD-ER AWAKENINGS, which takes the poems from my 5th to my 8th original collections: THE AUTUMNAL EP until POETIQUETTE. Oh - and YETI SPAGHETTI is still chugging along on the back-burner too - but might not be out as soon as the summer. I'm also working on many various Mouse of Commons stories, too/

Anyway - this is my most recent poem - it's about bears. I mean, it's not as if I've ever written about bears before in a poem, now is it. Oh no.

It's called SUPER YETI AND COSMIC BEAR and is dedicated to my friend Stephan (aka Cosmic Bear), who may be helping to design some of the forthcoming Mouse of Commons covers. :) It's not the first time I've written a bear-themed super hero poem; I did so with THE BEAR WONDER from LOVESONGS FOR THE BITTER AND TWISTED in 2004 - but this version is slightly different take on the whole bear superhero phenomena! lol! :)

Before you ask - the photo on this post isn't of bears; but it is a super being - it's Cat Deeley - my very own super cat!!!

Anyway, I hope you enjoy the poem!

Super Yeti and Cosmic Bear -
A dashing duo...
All foes beware.
They vanquish villains!
Can also fly!!
Armed with nothing more -
Than a trusty pie!
They'll crush those crims,
To uphold the law...
Bad boys cower...
To hear them snore...
They are the best!!
Each one a saviour -
And will swiftly deal,
With bad behaviour...

Super Yeti and Cosmic Bear -
Make plans for peace -
Within their lair...
They use pie-crusts,
To run their cars...
Spend weekends in -
Their home on Mars!
It gets tiring out there;
Brave crusading...
There's always someone -
Tries invading!!
Feet up; chilled out -
But not for long...
Too soon they're back to work -
Outlawing all that's wrong!

Super Yeti and Cosmic Bear...
Such heroic feats -
These days are rare!
Take credit cards -
To pay their wages...
Under "S" for Super -
In Yellow Pages!!
Rescue missions -
Done in style!!
They even have a -
Myspace profile...
Their daring do's...
Seem to inspire...
They must be cloned -
Should they retire!!

Super Yeti and Cosmic Bear -
Store their magic powers -
Within their hair...
They have the knack!
They know the moves!
Removing thorns -
From centaurs hooves...
Folk line the streets;
Just to applaud -
"We're safe with them!
Yes, safe from fraud!!
Those guys are great -
Each one a trooper...
They're both so special...
You can really tell they're super!!"
Posted by Paul Chandler at Tuesday, February 05, 2008