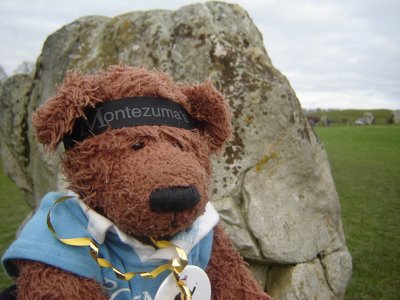 Just thought I'd write to say hello and also to mention that the new book of poems RHYMES BEARS STEAL PIES FOR, should be available sometime in April - although an exact date hasn't been decided yet. It looks like two new Mouse of Commons books might be out the same day and the limited edition SHY YETI DIARY 2006, photo collection.

As for RHYMES BEARS STEAL PIES FOR - I am currently putting the finishing touches to the poems and adding all the photos I hope to use.

This particular poem THE WAY PIE'S MEANT TO BE!?! was written just last night and is, once again very bear orientated. May I add that the finished collection doesn't feature exclusively about bears and pies - although with Charlie Grrr editing, that's almost a surprise in itself!!

To illustrate this page I am also posting a photo of Charlie Junior taken in a mysterious UK location just this last weekend; a photo that may well turn up in one of the Mouse of Commons books coming out towards the end of the year.

Anyway - I hope you enjoy the poem!!

Is it meant to look like that?
Is the crust meant to flake?
Does it need twice as long?
Should you grill and not bake?
Does the gravy go frothy?
Should it go off the boil?
Please just tell me it tastes good…
After SUCH lengthy toil…
Will it maybe go crispy…
If left out in the sun…
When it comes out the oven –
Should it weight half a ton?

It’s hard not to wonder…
When you’re brewing up tea…
I wonder – oh, how I wonder…
Is that the way PIE'S meant to be??

Is it meant to sound like that?
A sort of deep rumbling grrr?
Does it need to be louder?
A little less like a purr?
Should it be much more scary?
Should it make people shake?
Am I sounding unready?
Do I come over; fake?
Should I roar from my belly?
From my heart not my head?
If I let out a bellow…
Might I shock people dead?

It’s hard not to question…
When asleep up a tree…
I wonder – oh, how I wonder…
Is that the way GROWL'S meant to be??

Is it meant to feel like that?
Kind of stubbly and coarse?
Should I fear if it’s matted?
Or file for divorce?
Should I wear it in plaits -
Or perhaps in a bow?
I’ve asked many times…
But no cub seems to know!!
Is it better to grow it…
Til it touches the ground?
Or keep it chopped shorter –
Have a barber come round?

It’s hard not to worry…
But advice don’t come free…
I wonder – oh, how I wonder…
Is that the way FUR'S meant to be??

Is it meant to smell like that?
Do you think that it’s burnt?
Should there be such black smoke?
Oh, what lessons I’ve learnt!!
Is it meant to be flameproof?
Should it be surrounded by flame?
I must have dozed off…
Now I should take the blame…
Cooking food on the fire…
Often takes rather long…
But I took forty winks…
And now the whole thing’s gone wrong!!!

It’s hard not to ponder…
And yes, I’m sure you’ll agree…
A small, yet sad pile of ashes;
That’s not the way PIES should be…
Posted by Paul Chandler at Wednesday, January 31, 2007