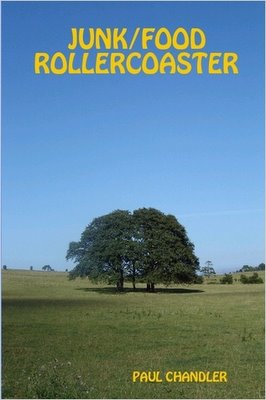 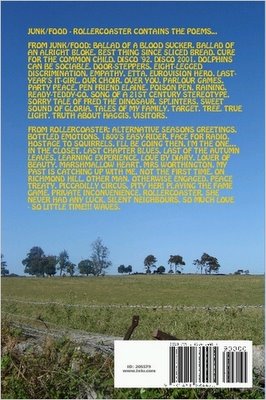 JUNK/FOOD-ROLLERCOASTER - FRONT AND BACK COVERS

In addition to the news about the latest Mouse of Commons book, you may like to know that the paperback version of my first lulu.com poetry book Junk/Food - Rollercoaster now sports a new cover. (See above photos)

Junk/Food-Rollercoaster is a compilation of my first two books which were originally self-published and produced back in 2001 and 2002. The first version available on Lulu, sported covers that Lulu made available on their site, but which were not necessarily unique to that book (ie: anyone else using Lulu could put them on their book too - or at least use the photo as a template.)

The covers that I have now used, initially on the Paperback - but within the next couple of days, allso on the hardback, are photos that were taken by me, last week whilst on a "working" holiday in Anglesea, Wales!!! ;-) (When I say working I mean writing loads of stuff and taking loads of photos for books - so it was as far away from work as you can possibly imagine. It was just great!!!)

Anyway, a lot of you probably have copies of this book - but anyway - you might still like to check out the cover, as I'm quite proud of it! :-)

PS Whilst away last week I wrote 5 news poems - among them, GRANNY ERNESTINA AND SUPERSTAR BOUDOIR and two others about bears! Surprise! Surprise!! More about these next post - but so far I have 20 new poems completed for the next book and a good deal of the photographs that will be going into it. Hopefully I'll post one of the new ones on here next time too. 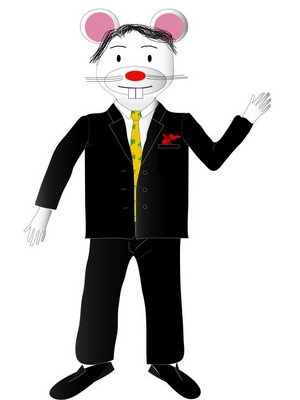 Gladstone McWhiskers says hi too! That's the mouse in the picture, if you haven't guessed. Thanks very much to Neph for doing such a great job!!

Anyway, a change from poetry books this time - it's finally time to announce the "birth" tomorrow, Friday 11th August 2006 of yet another new delivery in the Chandler book range!!!

As mentioned in previous post - the book is called Mouse In A Bottle and it's the second Mouse of Commons novel.

Once again, it features Gladstone McWhiskers - The Mouse of Commons and his assistants Ollie Louse and Bell. It was originally written at the same time as the first novel, back in 2000, but was then lost for 5 years. Here it has been unearthed, proudly dusted off and presented for your delictation! :-) MOUSE IN A BOTTLE tells the tale of a mysterious blue bottle in an antique shop - a small boy possessed by an evil spirit - an fiendish nemesis from the dim and distant past and a threat that could wipe out Gladstone McWhiskers, the current Mouse of Commons - once and for all.

You can take a look at the two books on the following links:

I'd just like to thank Lisa Parker and Andrew Trowbridge for the stirling work they did on proof-reading the book - and they've just confirmed that they're happy to do the next one too! Yay!! (See more later in this post!!)

I have been trying to keep the prices of the books on Lulu.com nice and round - but unfortunately the exchange rate keeps changing and so that the ones that I nicely calculated at exact amounts last week are now all odd prices! (ie: Effectively they're actually cheaper in pounds than they were a week or two ago!)

Hopefully we should have some photos from tomorrows mini-book launch to post on here early next week.

Oh - and finally - the other news is that as of yesterday, the third Mouse of Commons book MOUSE IN BEAR'S CLOTHING was sent off to Lisa and Andrew for final proof-reading. I am now working on finishing edits of MOUSE TALES AND MICE TAILS and am about five chapters into GLADSTONE MCWHISKERS AND THE MOUSES OF PARLIAMENT which will be available by the new year.

Mouse Commonsly hugs to you all!