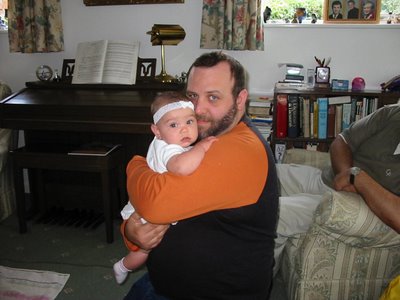 Another post and so soon!! This one isn't from the new book - POEMS TO MAKE BEARS GROWL - but there will be another poem posted from that soon.

This one is hot off the press and will probably be included in my next collection which is called RHYMES BEARS STEAL PIES FOR which won't be out until late 2006/early 2007 - depending on how many new poems I come up with over the next few months.

The picture included here is of my 6-month old niece, Alena and myself, taken on Saturday 8th July - the same day this new poem was written. It will not surprise you to learn that the poem was also inspired by our meeting.

Anyway - it's quite a sweet little ditty and I hope you'll enjoy it! :-)

PS Thanks to my Dad, Michael Chandler for the photo of Alena and I!!


Girls like Alena love poems like these…
Poems that zoom by and rattle your knees!
Poems that tickle and make you feel glad…
That don’t tell your mum if you’ve done something bad!
Poems of bunnies who wear fancy shoes…
Poems of princesses covered in oooooze!
Tales of adventure – where no-one stays clean!
Poems that rhyme – well, I’ve written umpteen!

Girls like a poem – that gives them a thrill…
As long as it’s safe and does not make you ill!
A poem that shimmers, but cannot be caught!
A poem that towers or one that’s just short!
A poem that sings to you - gives out a grin!
One that won’t growl please, and nibble your chin!
These are things girls can cherish, could I be any plainer?!
Yes I know! I am sure! ‘Cos I asked sweet Alena…

Girls like Alena like poems like this…
Nicer than sweets or a teddy bear’s kiss!
Poems with words in that cuddle you close!
Poems that cure you from feeling morose!
One of life’s giggles – a warm summer glow!
To be worn everyday in your hair like a bow!
Poems like these should be handed out free…
But I’ve bills that need paying – so please think of me!

Girls like a poem that promises smiles –
Not one that coughs or will give people piles!
Rhymes just like icecream – that cause you to melt!
Not ones that are silent – or ones that once smelt!
Poems that whoosh and are set to explode…
Are what young ladies like – not a well boring ode!
Yes, a poem that’s fizzy – and makes you insaner!!
If you need any proof – well just ask sweet Alena!! xx
Posted by Paul Chandler at Wednesday, July 12, 2006