KENSINGTON GORE - BACK FOR A SECOND SEASON... 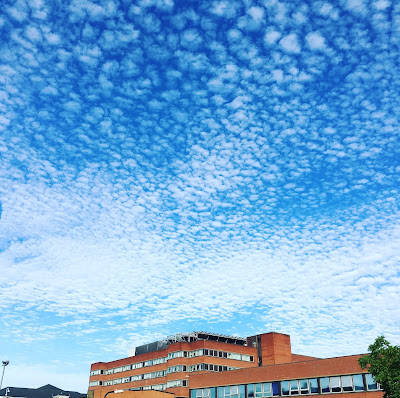 What's the relevance of the photo you may be wondering? Well, it was taken at St. George's Hospital in Tooting, London on Friday 7th July 2017 - with a beautiful sky above. I was there for a 6 month check-up and all was well. I got there early and recorded the links for one of my episodes of THE SHY LIFE PODCAST - in fact it was episode 94, which I will be telling you about in a moment.


As I've mentioned before we are almost ready to finally release the second seasons of both my series, HOT STUFF!! and KENSINGTON GORE, also themselves spin-offs from my BEAST OF FRIENDS series... This time we'll be talking about KENSINGTON GORE - but first up we have two new podcasts to share with you...

Here we are for episode NINETY FOUR - where this time Paul speaks with another member of Pride48 Royalty, Taffy Carlisle Huffington from Pod Is My Co-pilot and talk about many of her favourite things. The regulars also call in and - of course - there are also a few poems! Our next episode, number 94 - will be an extended edition of our 11th Pride48 show which is happening at 4pm (EDT) / 9pm (GMT) on Sunday 16th July 2017. Do join us, won't you?! Please email me at shyyeti@yahoo.co.uk if you have any comments - you can even send me a sound-file and I'll include it on the show. The music is by Shy Yeti and Luca. All content of this episode is Copyright Paul Chandler, 2017.  Episode 94 was recorded on the 7th July 2017.

Here we are for episode NINETY FIVE and it's time for our 11TH LIVE PRIDE48 SHOW - following our busy show for the 2017 Live Streaming Event, last month. This time around there are manner of oddities going on as we catch up with what Mr Yeti has been up to since he last faced the chat-room. Of course, all the regulars are there in one form or another and there is bound to be some manner of poetic goings on! Our next episode, number 96 is coming soon and in it we delve into the worlds of fact versus fiction with a number of our podcasting colleagues. Do join us, won't you?! Please email me at shyyeti@yahoo.co.uk if you have any comments - you can even send me a sound-file and I'll include it on the show. The music is by Shy Yeti and Luca. All content of this episode is Copyright Paul Chandler, 2017.  Episode 95 was broadcast live on Sunday 16th July 2017 from 4pm (EDT) and 9pm (GMT), with a number of inserts pre-recorded on 11th July 2017.

Before we move on - I'm in a position now to tell you all about the next few episodes leading up to our grand episode 100... As follows!!

Please note: All titles are currently provisional until time of release.


Mr Yeti chats with friends about the times where fact and fiction blend together during creative projects. Special guests: Nick Goodman and Toppie Smellie, plus others.


Paul and Calum head to Hamburg for a holiday - but as usual nothing quite goes to plan...


All manner of stories are presented in this exciting episode of the podcast...


Paul and co head to Bettina's for dinner at her beautiful country home - will they finally get to meet Bettina's mysterious boyfriend, Nathan?


In which Bettina and Tappie are finally united on the island of Jersey; we also hear from lots of other former guests - meet an antique dealer named Brocante and there are also a number of major revelations!!

So - as promised, do let me tell you a bit about the second series of KENSINGTON GORE which should be coming to a lulu.com page near you in August... 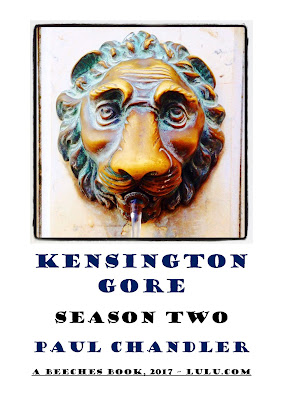 
KENSINGTON GORE focuses on a trio of friends who care-take a mysterious apartment block in the Kensington Gore area of London. They are Katrina, Warren and Lucy (who also featured in THE BEAST OF FRIENDS script-series) and on this occasion their troubles come from a mysterious lady called Adrianna and also from a ruthless vampire called Lombardo Braithwaite who intends to cause havoc!


SCRIPT 1:  OLD AND GETTING OLDER

Lucy fights for her life, but rescue comes via a huntress… Warren and Katrina pay a house call on a new resident whilst ignoring two old friends reunited in one body. Lucy has a visitor but is in for a shock when she later goes to see Jack in hospital.


Lucy and Jack entertain Lucy’s mother – Helen, whilst Warren and P.J. swap sob stories. Katrina shows Adrianna around the new flat and Copernicus is given another chance by his colleagues just as Jack and Lucy meet their guardian angel.

Adrianna calls in a favour only for Lucy to ask one of Ashley behind Jack’s back. Katrina gets curious about the statue of the girl and Warren and P.J. search for a missing man. Copernicus calls in to say his goodbyes and tempers begin to fray…

Adrianna learns that it is sometimes possible to trust a stranger… Warren sees Katrina’s statue photos – then the two of them speak to an old friend. Meanwhile Jack is absent, whilst Lucy goes on a mission, much to Helen’s dismay!

Lucy gets out of a sticky situation by choosing the most obvious method of escape; her problems aren’t over, but Ashley may help her. Meanwhile, Warren and Katrina are drawn into further troubles when Adrianna moves apartment.

Katrina deals with Adrianna – whilst Ashley and company seek sanctuary, but receive an unwanted guest. Warren looks for friends in Soho – but finds enemies…

SCRIPT 8:  EVEN COWARDS CAN BE HEROES SOMETIMES


Jack has a proposal for Lucy whilst Ashley’s attentions are divided. At the same time Warren and friends search for escape as Sebastian confronts the vampires… 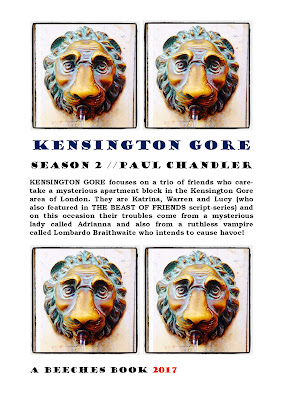 Next time we'll have an extract from the second season of HOT STUFF!! - as well as sharing with you the cover and hopefully we'll also be able to announce the exact release date of the two books...

Next week I'll be away with Calum and his mum up in Dunbar - taking lots of photos - recording a new podcast and probably writing something for the blog. Hopefully I'll be sharing the fruits of that trip the following week.

That's all for now - enjoy the KENSINGTON GORE extract... This is from the first script and is set in the hospital where Lucy is visiting her boyfriend, Jack after they have both been through quite a trauma. She is not prepared for what she will find...


MEANWHILE, AT THE HOSPITAL LUCY HAS ARRIVED AT URSUS WARD HAVING PARTED COMPANY WITH NIGEL AND ROLAND… THE SISTER APPROACHES HER AS SHE MAKES TENTATIVE STEPS INTO THE WARD…

SISTER: (politely but with authority)

Can I help you? Have you come to see one of the patients?

Err, yes… Is that allowed?

SISTER: (with a little more kindness)

In most cases, yes… One or two of the patients are only allowed to see close family – but most can see friends too… It’s nearly the end of visiting time, I’m afraid – but you have ten or fifteen minutes… Who is it you’d like to see in here?

Of course, you are… I’m so sorry – I don’t know why I even asked – I should have guessed! I can see the family likeness between the two of you… Bless you!

Err… You can? I’m sorry? The likeness between myself and Mr Archer?

Why, yes! I’m afraid he’s had a pretty tough day! He’s had no-one in to see him at all, so a visit from you is probably just what he needs… Follow me! (Lucy nods, confused – following her across the ward) Mr Archer! Your daughter is here!

SISTER: (gently, almost at a whisper)

I’ll leave you to it – don’t wear your dad out now, Lucy… Ten minutes – no more! I’ll come back for you when your time is up, alright?

LUCY: (nods, then waits until Sister has gone)

Sure… God, Jack… How did you get like this so quickly? I mean – I heard what you said before but I never really believed it until now… I’m sorry… Jack?

JACK OPENS HIS EYES – HE SMILES WEAKLY WHEN HE SEES LUCY AND CLASPS HER HAND TIGHTLY – HE LOOKS HOPEFUL, BUT SEEMS TO SENSE THAT SHE DOES NOT HAVE WHAT HE IS NEEDING – THE ELIXIR…

Someone has… It’s gone… It wasn’t there… Do you really think Paddy found it?

No… Not Paddy… Someone else… I don’t know who… Somebody near… They have found it… You must get it back Lucy… You must… You must or I’m a goner… Do you hear me, Lucy? If you don’t get the elixir back then I’m dead…

This post and all contents are Copyright Paul Chandler, 2017.
Posted by Paul Chandler at Thursday, July 20, 2017