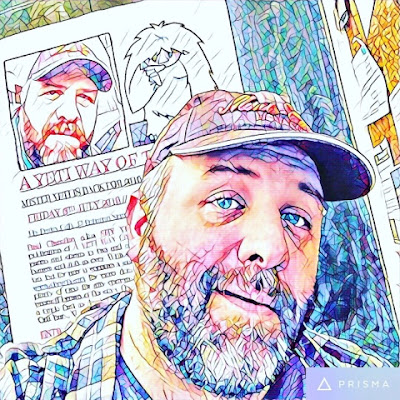 Just a quick post today - I know I promised more Kent stuff this week - but I've decided to save that one for next week when the two final episodes of the Kent trilogy have both been posted; episode 2 of the 3 came out during the week. As I say. we'll be looking at those last two episodes next time - along with further photos, before we say farewell to this part of the world, at least for now!


On other podcasting matters... I have been recording a few bits and pieces for future episodes... A couple of weekend's back I recorded a whole episode with Nick Goodman back in Salisbury - although I don't expect that one to be editing until late October, early November. Last weekend - I recorded for my birthday episode with my old friend Paul H who was on our very first episode (not including the pilot!) - we were in a rather grand restaurant in London, which was all very swanky. Probably my most recent interview was with my old friend, Jo - who last appeared in episode 12: MY WIFE AND THE POET...  We had a good old natter and caught up a bit - not to mention discussing some of her favourite and not so favourite things. This one won't be out for a while, but it's nice to have plenty of new interviews squirrelled away for the winter.

In addition to that I have also been recording links for the end of episode 21 which, as I say, I have just completed - I'll tell you more about it next week, but here is the link:

Don't forget that it's also available on iTunes, Podbean and Acast under THE SHY LIFE PODCAST.

I've also been recording messages for James and Tim from the TASTES LIKE BURNING podcast - it's gotten a little out of hand really, but in a good way - so much so that I'm now recording inserts for my own podcast using characters originally created by me for Tim and James's show... All these messages will be appearing on episode 23 which I have been recording links for a couple of days ago - I have also been busy recording the next Shy Yeti script.

In the next couple of weeks I have two other exciting recordings coming up - one is for my birthday episode with an old friend of the show and the other is a return to Radio Wey with Tim M; so who knows what will be happening with that one!

Talking about special episodes - I pretty much have my Halloween episode in the can ready and recorded - although I still need to do the links. As of this weekend I was talking to one friend, also a podcaster, about him doing me an intro for that particular episode! I'm not sure how much more to say - only you have heard this person's voice on the show - but he is yet to be a full episode guest... But he will be soon!

This time I'm sharing with you some of the different photos that I generated on the Prisma app as part of designing a cover for the forthcoming SHY YETI SCRIPT BOOK, which will contain all the yeti scripts that I've been writing this year and into the new year. Originally I was going to release this book at the start of 2017, but because I've been busy with the podcast and other projects I've not written as many yeti scripts as I'd been expecting to. There is currently a bit of a story arc involving Toppie Smellie which means that I'd rather the book end where that storyline ends too. So, rather than post the scripts before this arc is complete I will keep on writing them into 2017 and publish the book when I seem to have reached the most suitably end of book-ish stage of the writing process.


Having just said that I've not written a new yeti script in a while - I am actually expecting to release a new script in a couple of weeks time. I've been working at one set at a poetry open-mic night where Shy and his poetic comrades encounter weird goings on in the audience. It's taken me a while to write - but it's almost there and hopefully I'll have it ready for posting at the very beginning of October. I've already begun work on the next script; I have plenty of ideas - with and without Toppie's character - it's just a matter of finding the time to write them, really.


In addition to that, of course, I'm still slowly recording the scripts for the podcast and have posted three of those, so far - with the third appearing in the second of the Kent trilogy of episodes. I recorded the fourth script just this week - so there will definitely be more... 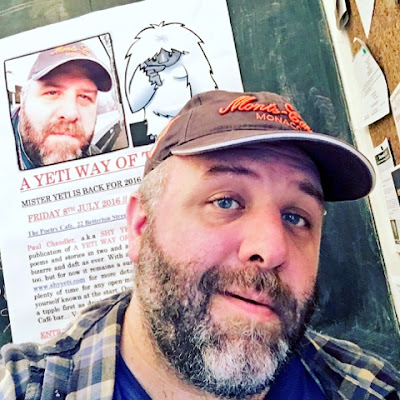 Anyway! Back to that book cover... First up is the original photo - and then following that are some of the variations on a theme, thanks to Prisma! 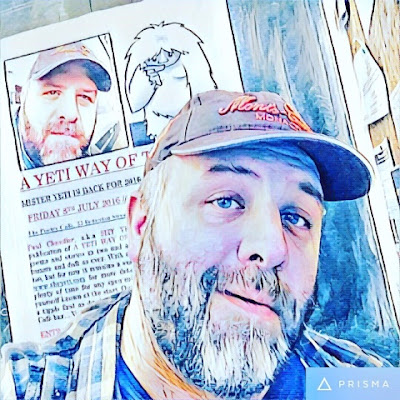 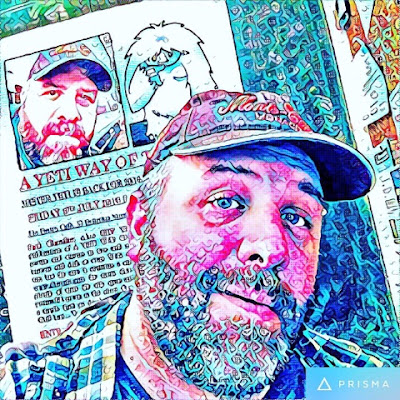 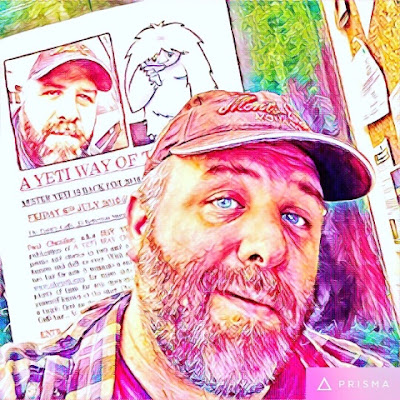 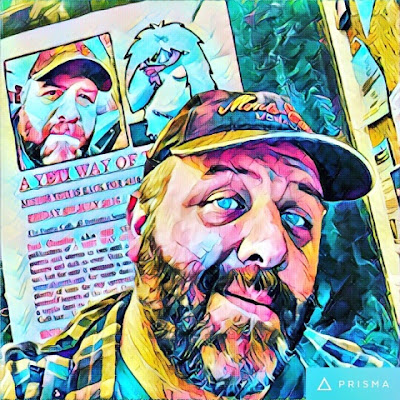 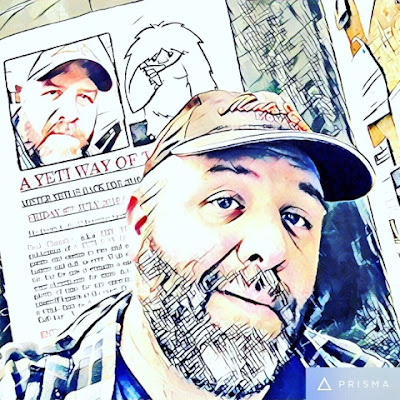 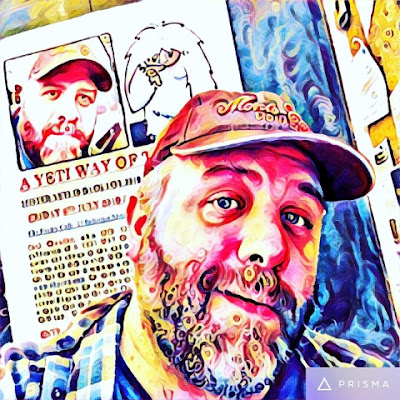 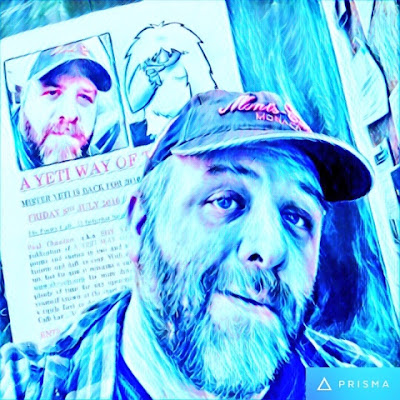 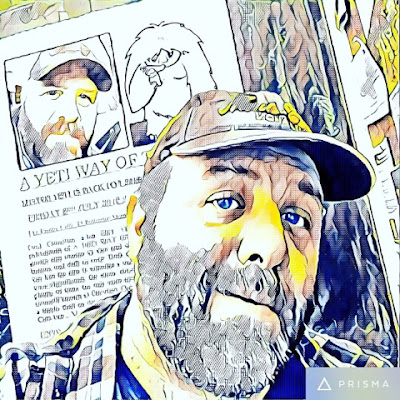 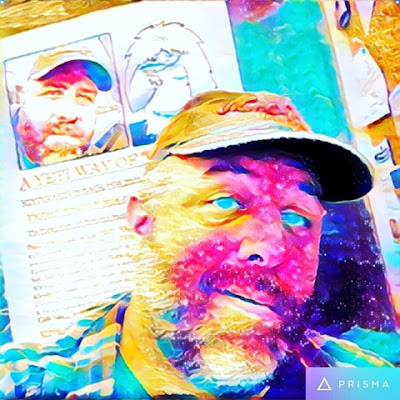 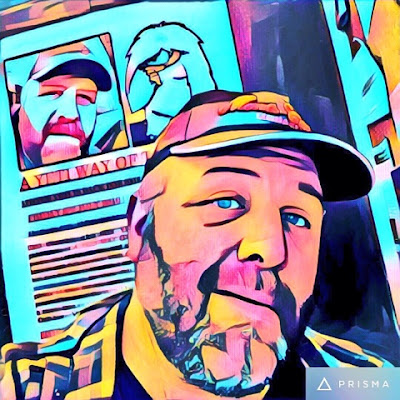 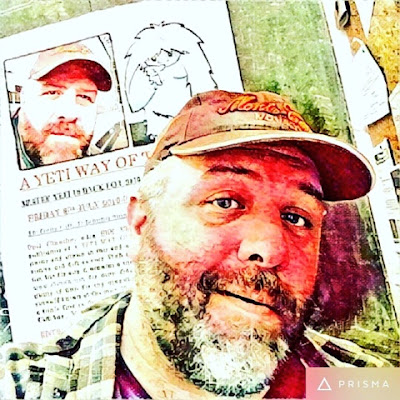 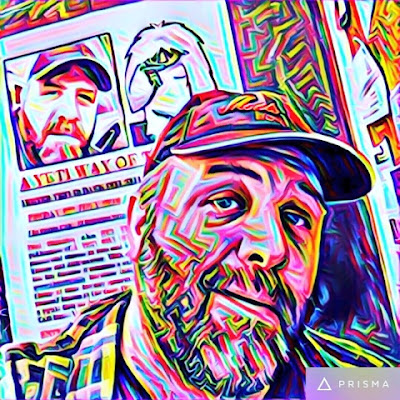 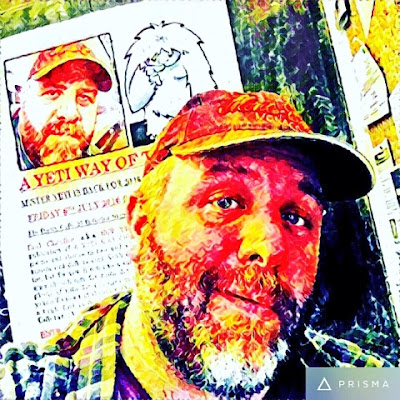 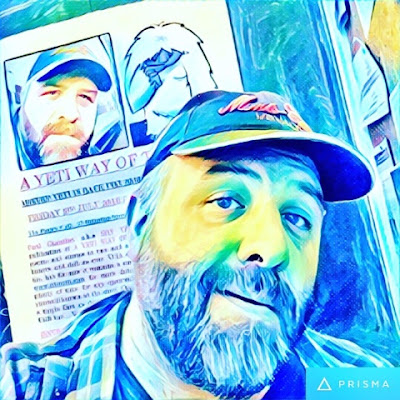 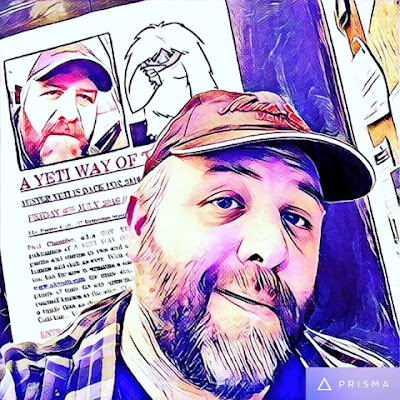 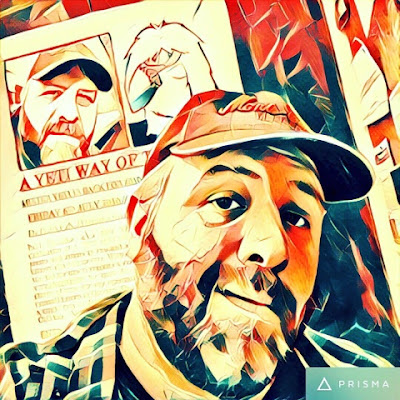 Which ones are your favourites?! There are some weird and wonderful versions, I think you'll agree!
Before we go I would like to update you on my BEAST OF FRIENDS movie script - YETI DON'T FALL BACKWARDS, which - as I type - is as good as complete. I aim to send off for a draft copy which I can take with me to Venice in November and whilst over there I'll take some photos and write a blog piece. I began writing the script there back in November 2014 and not only does it feel right to take the finished book back there - the script is, of course, set in Venice. The finished book - published towards the end of November - should contain some of those photos and the blog piece written about that piece and then the project really will feel like it's finished and ready to send off into the world!
WATCH THIS SPACE!!! No... Not that one... THIS ONE!!


Next time, as mentioned earlier, we'll be back in Kent for those last two episode of the trilogy - you're in for lots of oddness - not to mention a couple of special guests and bus trip to Canterbury; that and some poems too!

P.S. ...And at time of writing this is what the cover will probably look like!! 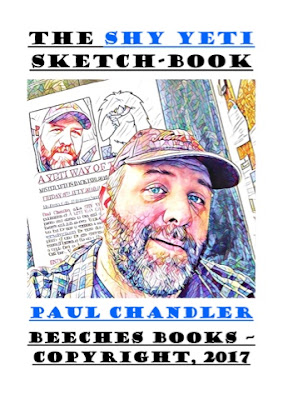 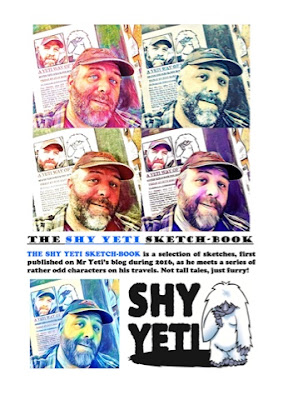 This post and all contents are Copyright Paul Chandler, 2016.
Posted by Paul Chandler at Sunday, September 18, 2016