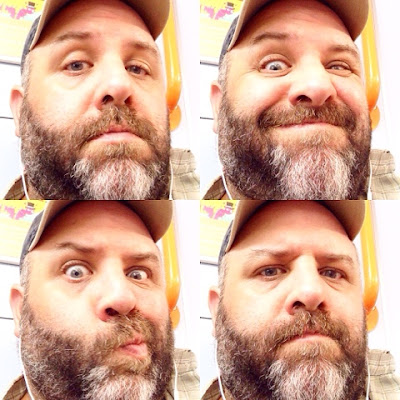 THE 4TH AND FINAL SEASON IS RELEASED!!

This time we will finally be celebrating the release of the 4th season of THE BEAST OF FRIENDS... In fact, let's get started - here we go - first up details of the book and where it can be found to purchase and then four extracts, one from each of the scripts... 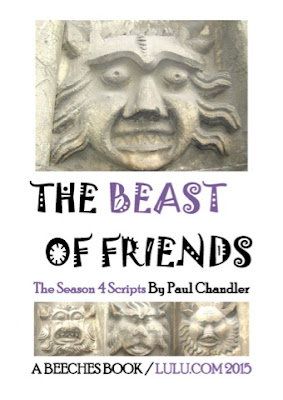 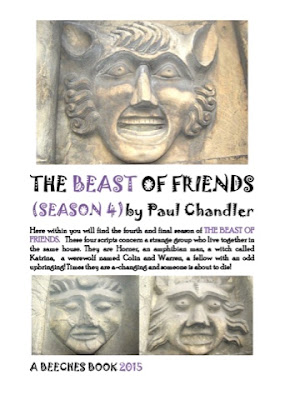 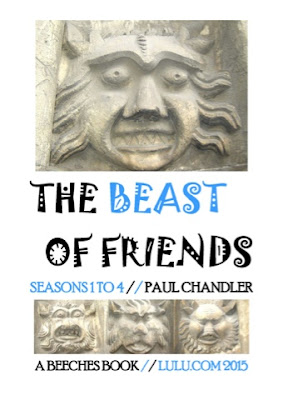 SCRIPT ONE: CRIMES OF PASSION... (EXTRACT)


KATRINA WATCHES FROM THE STAIRWELL AS THEIR GUESTS - ROLAND AND VELMA MAKE TO LEAVE, SHE PRETENDS TO BE APPLYING LIPSTICK, BUT IS ACTUALLY SUCKING IT DISTRACTEDLY – HER EYES ARE FIXED ON VELMA WHOM SHE IS TRYING TO VIEW IN HER HAND MIRROR; HOWEVER WHAT SHE SEES LEAVES HER TWICE AS SHOCKED.


Oh! That’s unpleasant… I mean us witches used to get a bad rap for what we did in the past but considering how many non-witches ended up burnt… Wow!


THE FRONT DOOR SLAMS BEHIND VELMA AND ROLAND – WARREN APPROACHES KATRINA AND HORNER LOOKING QUITE EXCITED...


Katrina… Tell Horner what you just told me… Katrina! Did you hear me?


KATRINA: (mutters to self)


Those dratted people! How dare they just come here like this… What is it Katrina?


Katrina… Listen, now! What do you know about these people? You need to tell me and we need to make sure that Colin knows that they’re after him too…


Go on… Tell them what you did to Roland…


KATRINA: (trying not to ramble)

Alright! Alright… I will… But it’s not just him… It’s her too… She… She has no reflection – Velma… She’s a vampire – I haven’t seen one up in London for quite a while… They were the “new” witch at the turn of the century as far as taboos were concerned! She’s one of those new-fangled ones too who can go out in the sun!

MEANWHILE, ACROSS THE ROAD COPERNICUS AND KATRINA ARE SQUASHED UP INSIDE A PHONE BOOTH WATCHING THE HOUSE AS THE CAR PULLS UP TO PICK UP FAKE KATRINA… CONSIDERING THAT HE IS A GHOST COPERNICUS IS TAKING UP RATHER MORE SPACE THAN ONE WOULD EXPECT AND KATRINA IS FEELING QUITE UNCOMFORTABLE…


Everything seems to be going okay so far… That’s a relief, I must say…


I can’t help but think that your friend, Mr Quaverall must really hate me… I can’t believe how I got away with all the wicked things that I did back in my youth…


COPERNICUS: (having not properly heard)


Roland… He must really really hate me – for killing him…


COPERNICUS: (trying to cheer her up)


I don’t think so… Well, not any more – that’s nearly half a century ago… He’s had lots of adventures since then – it’s just that they occurred after his death…

There can't be that many people who can say that they've had that experience...

KATRINA: (snapping back, but grinning)


When I used to ride about on my broomstick I always used to take a cat with me… Sadly they never had very good balance and used to fall off.


LUCY: (muttering away to herself)


I thought cats were meant to have GREAT balance… Isn’t that one of their things – or am I thinking of monkeys? Well, I guess they’re definitely good at balancing because you see them up trees running around – do you think that maybe they wear Velcro on their paws or something? Although wouldn’t that mean that someone would have to put Velcro up the trees too – so the two layers would stick together!?


LUCY: (focusing on the topic of the moment)


They like trees too, don’t they? Anyway, so yours used to fall off your broom?


Most Witches’ cats hang on – but not these ones… That was my fault – I scrimped on good puss – you live and learn! Rather foolishly I used to get mine second-hand!


Second-hand cats? Where from exactly?


The second-hand cat store… It really is that simple…


The second-hand cat store? That’s an actual place?! Okay… Why DID you get them second-hand? Were they old? Cheap? Lacking in posture? Perpetually asleep?


KATRINA: (confirming all those suggestions)


All of those things and usually they were slightly incontinent too…


But WHY? Why did it all go so badly wrong for you?


Well, I don’t really like cats! I just felt I ought to have one… For appearances sake!


LUCY: (having considered this)


You wanted them to suffer a bit, perhaps?

MEANWHILE, NOT SO VERY FAR A WAY A MAINTAINANCE MAN IS ENTERING THE SEWERS FROM A MAN-HOLE ABOVE. HE LOOKS AROUND AND NOTES A RUSTY PIPE IN THE SHADOWS – TICKING IT OFF ON A LIST AS HE EXAMINES IT… ALL OF A SUDDEN SOMETHING DISTRACTS HIM…


MAN: (furiously, yet nervous too)


HEY!?! What’s that? Bloody kids… Come out and show yourselves… What’s going on? Who’s keeping cows down in these sewers? That’s illegal!


Come out and show yourselves… There you are… What gorgeous cows… Who brought you here… Just come closer – let me stroke you… You look gorgeous.


VELMA SUDDENLY STEPS OUT OF THE SHADOWS BEHIND THEM…


These cows are mine… What business is it of yours?


You can’t keep them here – you’re not even meant to be down here – let alone your livestock! If you don’t get them out of here then I’ll get the law on you…


I really don’t think you will… Who do you think you’re speaking to? You have no right to command me; I’ll do what I wish! I wouldn’t start threatening me either – my friends here are very protective of me; I wouldn’t shove them if I were you…


Why not? I’m just trying to get them out of the way… It’s what you do with cattle!


Here, pretty cows… Come to daddy… Just you wait until I get the law on you, missus… You’re going to be in such trouble… Come on now… Pretty cows…


THE MAN REACHES OUT FOR THE CLOSEST COW WHO HAS BEEN LICKING THE MOSSY SEWER FLOOR – AS IT LOOKS UP HE REALISES THAT THE COW IS FAR FROM NORMAL; IT’S FACE IS HIDEOUSLY DEFORMED, WITH AN ALMOST EVIL EXPRESSION – ITS TEETH ARE SHARP FANGS…

VELMA LAUGHS – THE MAN’S SCREAMS ECHO DOWN THE TUNNEL...

Finally, moving on from THE BEAST OF FRIENDS I am expecting to release the first seasons of the two spin-off seasons in either January or February - so keep yours eyes open for news on that. I won't write about it yet as If I do I might give away a couple of spoilers... But soon!!

Next time, I'll either be building up to or reporting back from my one and only gig of 2015, which takes place at The Poetry Café of Thursday 29th October... It all depends on how much time I have... Once that show is done we reach that time of year again where I am due to go away for my birthday and I am hoping to take plenty of photographs and write another Horner diary piece which may or may not explore the mystery of the candy-floss eating zombie from my previous Devon story from a couple of weeks ago. 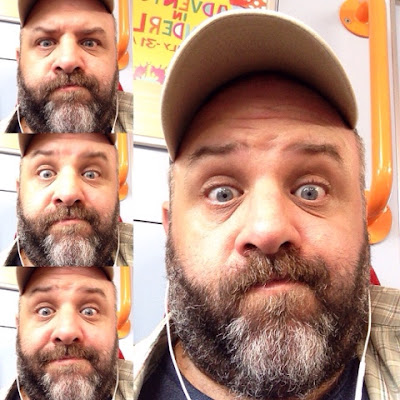