MERRY CHRISTMAS FROM "THE BEAST OF FRIENDS" 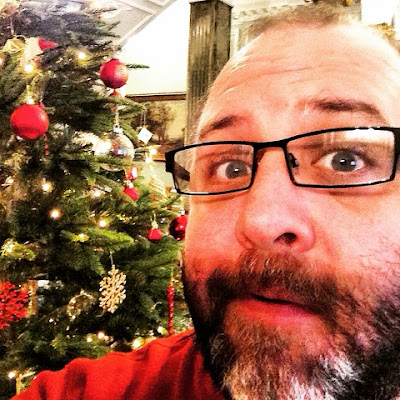 MY CHRISTMAS GIFT TO YOU...

Firstly here are a few links to my previous Christmas posts... 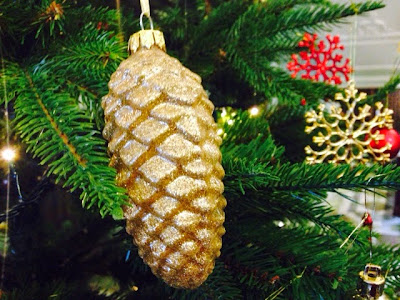 Usually I write you something new and that is usually a Christmas-themed poem or story. On this occasion, and as 2014 has been so much about my scripted projects I thought I would share with you a Christmas-y sketch which you can read whether or not you have been following the BEAST adventures. The main characters are under-lined below and for those in the know this sketch takes place towards the end of the second season of the show - with season 3 due out in the new year this seems like a good time to fit in an extra scene!

Anyway, enjoy and have a glorious Christmas and a wonderful new year and I shall be back with you early in 2015, possibly with a look back at my writing highlights in 2014...

P.S. Apologies if there are any typos in the following script - it is a second draft... The finished piece will be published in a BEAST OF FRIENDS publication during 2015. 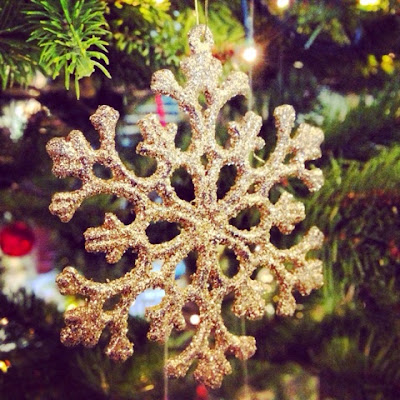 THE BEAST OF FRIENDS...
CHRISTMAS SKETCH 2014

A travel-writer who spends a number of months a year as an amphibian, trolling about the swamps of SW6. This Christmas he is looking pretty human, however. He is the landlord and friend of the other characters.

A kindly witch with a fondness for gin, amongst other alcoholic beverages.

A werewolf with a rather unorthodox approach to transformation - the moon rarely affects him but almost anything vaguely circular is sure to set him off.

Warren grew up alongside all manner of supernatural eccentrics; however he himself is pretty ordinary by comparison. Being gay used to shock people, but when you've got a dragon in the family being gay all seems slightly dull.

It is Christmas Eve somewhere in Fulham, London and Horner, Warren, Colin and Katrina are preparing for the festivities. Horner has just finished wrapping presents and is taking a breather, Colin and Warren are decorating the kitchen whilst mince pies cook in the oven. Meanwhile Katrina is reading a magazine - suddenly she stops, muttering under her breath until Horner enquires as to what the problem is exactly.

What have you seen, Katrina? Either you're furious about something in your magazine or that cheeseboard at lunchtime has given you indigestion.

No wonder she's got indigestion if she's been chewing that... Did you get splinters again, Katrina? I don't think she even touched the actual cheese!

Ha bloody ha... You'll never believe this... I was reading this article and it's all about a particular programme that's on the radio over the seasonal period - it's the pilot episode for a possible series apparently! Shocking...

So presumably it's not the latest episode of Dessert Island Discs? I love that show - you never quite know what they'll be discussing each week?

Not spotted dick again, surely? She must know that recipe off by heart...

You'd have thought so, wouldn't you?

Aww... Don't be cruel! That said don't you usually prefer a good board game to the radio, Katrina?

Usually I do, yes!

I'll never forget the year she suggested we play Strip Monopoly... She kept winning too!

I simply have a natural talent, that's all!

...For getting naive men to slowly remove their clothes over a board game...

A talent is a talent and not to be scoffed at!

Anyway, Katy - what's this radio show that you're so in a tizzy over?

You'll be in a tizzy once you've heard this... Let me read you the piece - it's only short! Do you recall a certain Shy Yeti of our acquaintance?

Of course! That yeti poet bloke we had staying with us not so long ago...

The one who was taking all those notes about us for his script?

I thought we'd bamboozled him so much that he didn't know what on earth was true about us and what was made up?

I guess we did - to a point... But it doesn't seem to have stopped him writing something inspired by us... Listen to this...

"Shy Yeti is better known for his verse - this is his first radio play and it focuses on an extremely odd-ball collection of characters who all live together in a house in Fulham. Horny-face, Kate, Darren and Wolfy are a gang of oddball weirdoes who like nothing better than drunkenly scaring the neighbours. Mr Yeti claims that they are based on real people that he has had the misfortune to live with; but I'd take that with a pinch of salt..."

WARREN: (laughing but not with much amusement)

So? What do you make of all this, Horner?

Funnily enough this is not the first that I have heard about the matter... In fact I have arranged a small listening party for this very evening!

It is indeed... What are you planning, Horner?

Ah... That would be telling... Some mulled wine, chestnuts roasting over an open fire - maybe some marshmallows - a jacket potato or two and my old portable radio...

That's all very well - but what about some right-to-reply?

A FEW HOURS PASS AND THE FOUR FRIENDS ARE OUT IN THE GARDEN AND WRAPPED UP IN THEIR WINTER COATS... THERE IS A FIRE BURNING BRIGHTLY, WHICH IS KEEPING THEM WARM AND THEY ARE TUCKING INTO THEIR JACKET POTATOES AS THE RADIO PLAY IS TRANSMITTED... THE SHOW IS ALMOST OVER BUT THEY ARE LISTENING INTENTLY...

Hey guys! I meant to ask - what is your favourite thing to do at Christmas? Other than reading the latest collection of fantastic verse by that terrific poet, Shy Yeti!? I'm too dull and boring myself to actually have an opinion about anything like that... I've probably mentioned it before but my family would rather I hadn't been born... Weird, right?

Really weird!! Darren, they just wanted to save money on buying you Christmas presents... Don't fret! We like you no matter how ordinary you are, dear...

Thank you, Kate... That's lovely of you! So what are your favourite things to do at Christmas?

Well, you were obviously correct that reading Mr Yeti's poetry would be top of my list... He's such a wonderful rhyme-writer! But other than that... Well, being a witch I really do enjoy flying on my broom and putting spells on skate-boarding teenagers! Nothing beats it! What about you, Wolfy?

Howling at the moon and eating O.A.P.s is always fun - whilst reading Shy Yeti's latest volume of amusing ditties whilst I floss my fangs...

Is it available from all good book shops, Wolfy?

Indeed it is... I believe it's called NOT AS SHY AS I WAS and can be purchased from www.lulu.com for £9.99 in paperback.

That's terrific! So what do you like doing best at Christmas, Horny-face?

I must say first of all that poetry reading is my favourite thing - but otherwise I enjoy shedding my skin messily and kidnapping frog-faced girls with my fishing net to drag back to my underwater den in the marshes... Once there I can sing limericks to them in a bad Welsh accent...

Sounds like the kind of thing you do most nights, honey!

THE REST OF THE CAST LAUGH AND THE SHOW ENDS IN A RIOT OF CHRISTMAS CAROL SINGING... BACK IN THE GARDEN THE FOUR FRIENDS DO NOT LOOK BEST PLEASED...

Well, if that bunch of tosh gets commissioned for a full series I think I'll give up and go and become a nun...

To be honest he doesn't get much at the moment - so getting none won't be much of a difference...

Oh! Katy... You do say the funniest things sometimes! But ONLY sometimes...

Stop it, the both of you! That show wasn't even vaguely funny and neither was that extremely ancient nun joke!

Ah well! There's no hope for me! I actually laughed...

Well, I was offended... All he could come up with was a cheap imitation of us with not a single iota of originality...

What do you expect from a yeti!? They're all the same! They're as egotistical as bears but about twice as useless...

Well, I think we should demand an apology...

Can't we sue him for clearly basing his characters on us? Stop him from writing a whole series; from making money out of us?

I thought my mother was a tyrant - but she's nothing compared to that yeti... He's been hanging around all the wrong people! Someone once told me that he used to be quite a nice guy when he first started out!

I heard that too! But listen... If an apology is all you need then that should be quite easy to arrange...

Just speak to the fire...

Speak to the what!?

Let me show you... Would anybody else like a second jacket potato or maybe a corn-on-the-cob?

WITHOUT WAITING FOR A REPLY HORNER APPROACHES THE FIRE, WHERE ON TOP OF THE HOT COALS SITS A LARGE DOME OF TIN FOIL AND A HUDDLED FURRY SHAPE THAT IT APPEARS HAS BEEN TIED FIRMLY TO A SPIT. IT IS SHY YETI HIMSELF.

Is that who I think it is? Really?!

Absolutely... He's terribly sorry too for all the trouble that he's caused.

Am I allowed to poke him with a sharp stick?

Only a blunt one I'm afraid..

Keeping warm over there I hope Mister Yeti? I do hope that the food is almost cooked!!!

HORNER FREES SHY YETI'S GAG
TO SEE IF HE HAS ANYTHING OF ANY USE TO SAY...

Don't apologise... Those potatoes have come up a treat...

Horner, is it true that yeti toes make an ideal topping to trifle?

Well, I certainly enjoyed them - I had them in Riga last year... They were delicious!

Oh yes, that was the year we all flew there on the back of your broomstick...

WARREN: (remembering as if with affection)

...And you spent all weekend howling at the moon whilst I sat there drinking breakfast tea and being excessively boring and conventional...

...And I menaced the city catching innocent tourists with just my wicked charm and a butterfly net!

Once you sign a sworn statement promising to never write another dodgy radio play about us, then maybe...

Me neither... Let's nibble his toes and see if they still taste nice!

I'd rather have another jacket potato! From the smell of him he's not washed any time recently...

Nasty! Somebody give him a wipe down with a wet sock or maybe just don't bother! Oh well... Each to their own... Merry Christmas everyone!

Will whoever is nibbling my toes please stop doing so...

This sketch was written between 13th and 16th December 2014 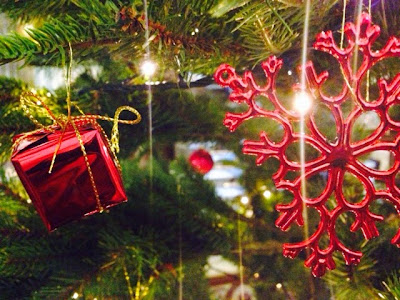