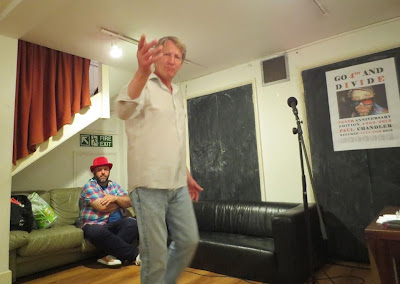 BACK AT THE POETRY CAFE!!

Well, this week our main focus is going to be last Friday's Poetry Cafe show... This time I performed a mix of new pieces, poems from the 10th anniversary edition of GO 4TH AND DIVIDE and one or two other favourites. Thanks to all who came along on the night, despite the very hot weather. Audience members included: John Smallshaw and friend, Nick G, Glyn G, Dan H, Baz D, Toby W, Gibson G, Miles B, Stefano, Harry F and Jason - not to mention a couple of stray ladies and a gentleman who popped in to listen during the second half.

Anyway... This is, more precisely, what went on!?! 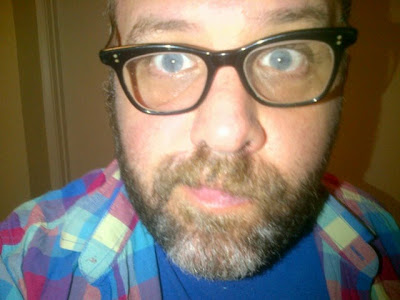 SHY YETI AT THE POETRY CAFE


All poems marked * were recorded

EXIT PURSUED BY A YETI *
HOPELESS ROMANTIC *
THE KING OF RHYME *
HOW CAN WE BE WRONG? *
LAS VEGAS LIPS *
A LEARNING EXPERIENCE *
GERIATRIC MERMAID * 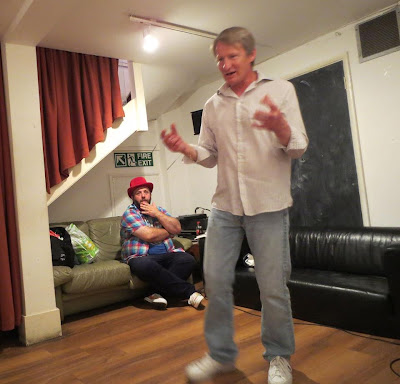 EXIT PURSUED BY A YETI

The first poem of the evening was an old piece, not only is it a yeti-themed verse, but it's one from GO 4TH AND DIVIDE, which is the book that we were celebrating on the night. It's also one that I recorded last year for one of my as-yet-unedited Lake District episodes. Coming soon!! I promise!!

HOPELESS ROMANTIC
THE KING OF RHYME
HOW CAN WE BE WRONG?
LAS VEGAS LIPS
A LEARNING EXPERIENCE

The next five pieces are old favourites - as I knew there were people in the audience who wouldn't have heard them. Along with EXIT PURSUED they were compiled into my 2009 collection, SHY YETI RULES OK - although they all originally appeared in separate collections. I've not read any of them live in a while, but they're always fun to perform. A LEARNING EXPERIENCE (2001) is one that I used to perform at most of my shows and was the poem I selected to be turned into posters for my Cobalt Cafe appearance in LA back in August 2011: http://poetrysuperhighway.com/cobalt/080211.pdf  I've not performed it much recently, so it's nice to give it an airing for 2013.

This was the newest piece of the evening, in fact it was only completed two days before it was performed. It's always nice to have some new poems to perform and this one was inspired by a silly conversation that I had with Toby whilst picnicking up in Richmond on Saturday 13th July 2013.

After John's reading I moved onto GO 4TH... but rather than choose my own favourites I put the titles into a hat and had audience members randomly select them. This half, in the order they were picked, I have Dan, Miles, Harry and Nick to thank for what I read and they made for an interesting selection as they weren't necessarily ones would have been my first choice or which I regularly read live. They were also a nice mix of poetry and prose pieces.

These next two poems are both new and unpublished. ONION MAN was probably about a week old when I received its debut here. It's almost a song lyric warning about an untrustworthy fellow who hides his true personality beneath his "layers". RUNNING ON EMPTY was written back in June whilst I was in hospital and draws together a lot of what I had been feeling whilst I was on the ward.

The final three poems of this half were published in my SHY YETI RULES OK volume from 2009. POLITELY ENRAGED is full of old-fashioned sounding curse words, whilst MY DEAD DAD is not autobiographical - but it is one of my favourites and concerns a rather troublesome zombie family. It's a bit grim, mind! THE TRUE LIGHT is another of my most frequently performed poems. It is the one, back in 2001, that got me started again with writing verse. This is its first airing for 2013.

Another yeti poem to start the second half and one that I've performed quite a lot over the years. It's also included in 2009's SHY YETI RULES OK compilation.

SCABBY DONKEY
CHECK UP, CHECK OUT
HANGING OUT IN GRAVEYARDS...

These three pieces are all quite new and won't appear in any collections until at least 2014. The first poem was inspired by a northern English expression that I heard on Coronation Street and then later asked Toby about. It ended up as a piece about not being fussy about your food, not to mention that it has a bit of a tongue-in-cheek political rant along the way. CHECK UP, CHECK OUT is a short story about a doctor and one of his patients, written on the District Line one afternoon in early July 2013. HANGING OUT IN GRAVEYARDS WITH MY SWEETHEART was inspired by a walking in Brompton Cemetery with a friend during early summer 2013; it's not the first time this location has inspired my writing either.

LEAVES ON THE LINE

This is an old piece that I revisited whilst working on the 10th anniversary edition of LOVESONGS FOR THE BITTER AND TWISTED (2004). It muses over what would happen if a theme park had the same problems in running the service as often occurs with running the trains in the UK.

This poem is another quite new one that is not yet published and in some ways is a bit of an update on the sort of cynical romantic poems that I wrote a lot in the early to mid 00s.

John read next and once he was finished I performed a couple of poems from my SHY YETI STILL RULES OK compilation from 2012. They're both favourites of mine and JOHN... was written to John S himself, so I like to read it in his presence, now and again. It's all about being proud to write poems in whichever style you choose and it's one that went down well at the Broadstairs Folk Festival last year.

WOULD YOU DENY US?
ROSY-TINTED LIFE
MY LAST LOVE...
ROCKPOOLS

The next four poems were selected (in order of picking) by John, Baz, Toby and Gibson and are all from GO 4TH AND DIVIDE. The first of the four I've not peformed live before, but the others I've read on occasion. Again, it was a nice mix of prose and verse and not necessarily my own first choices - which made it more nerve-wracking and also more fun to perform.

WE WERE GOING TO BE WED...
ALTERNATIVE ROCK...
I WILL EAT PIES

The final poems came from 2012's SHY YETI STILL RULES OK. WE WERE GOING TO BE WED (WHEN WE BOTH HIT 40) I read partly because it's my 40th in November and partly because I love reading it, especially the way the final verse gallops to its conclusion. The second piece is one of my favourite prose pieces of the last few years; it's a deliberately very silly piece. I WILL EAT PIES is a poem with connections to a famous 70s tune that I often read at the end of my shows, although I haven't done so lately. 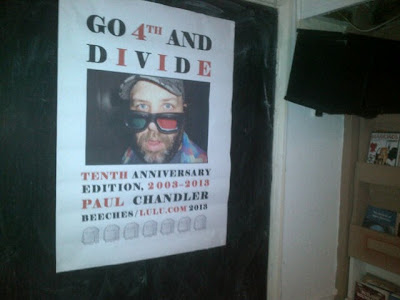 I didn't prepare a "cover version" piece this time, having forgotten to read the one that I did prepare at my last show. There were a handful of poems that I did prepare for the night but which I didn't read and these were: THE GIN GOBLINS, GRANNY ATE MY AFTER-BIRTH, PEACE OF MIND IN A TEA-BAG and WE AIN'T GOT TIME...
Other than some filming I did myself we didn't have a cameraman on the night - instead I used a book shelf as a tripod and managed to record over half of the evening's poems. It was just to hot to expect anyone from the audience to film. It all came out rather well anyway! Thanks again to everyone who came along; over £30 was raised for Macmillan Cancer Support during the evening. 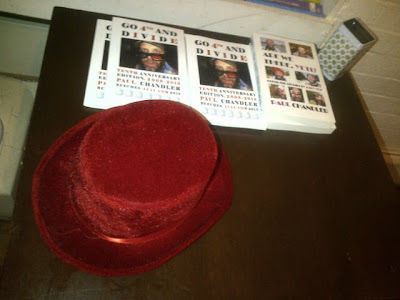 Next week I'll be posting on Monday - just before heading off to the Lakes for a week. Expect more photos from the Shetlands trip and maybe a new poem next week and then a post about the 2013 Lakes trip later the following week once I'm back.

PS There will be more photos from the night once I return from The Lakes. 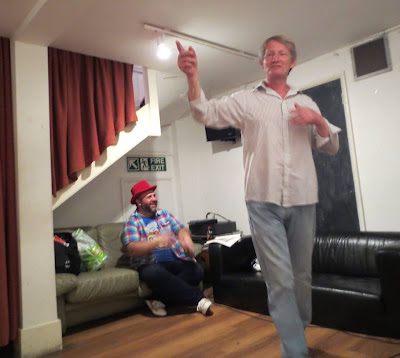 Thanks to John Smallshaw for the use of all photos of his performance. All other photos and content of this post are Copyright Paul Chandler 2013.